A spate of seven shootings across Minneapolis over a 26-hour span between Saturday and Sunday morning left 11 people injured, two critically, police say.

The first shooting happened around 12:50 a.m. Saturday. Police responded to a hospital where a man had been dropped off with gunshot wounds. He told police he was robbed at gunpoint and was shot while fighting back. He didn’t know where the incident happened. Police say he is expected to survive.

Then, at 1:27 a.m. Saturday, officers responded to a ShotSpotter activation near 27th Avenue South and 29th Street East. A man who had been shot in the area ended up at a hospital with non-life-threatening injuries.

Starting Saturday evening, there was a string of shootings over the course of nine hours that left nine more people injured.

At 6:39 p.m., police responded to a ShotSpotter activation near 23rd and Bryant avenues North. Less than 10 minutes later, police were told a woman with at least one gunshot wound arrived at North Memorial Health Hospital. Police say she is in critical condition. 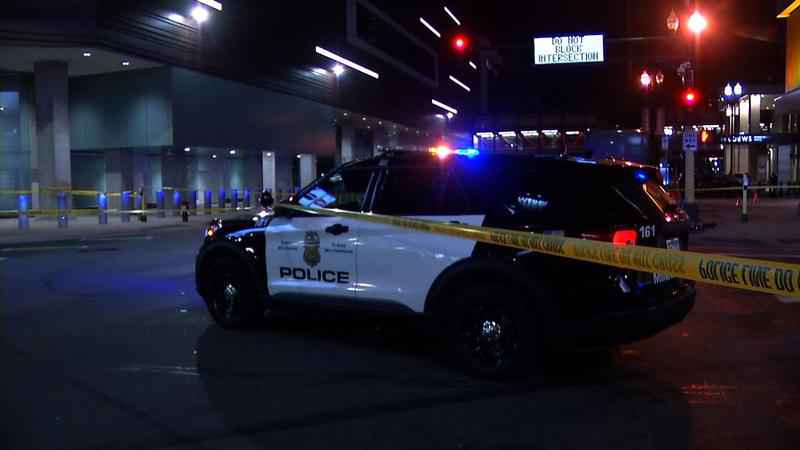 Police block off the scene of a shooting that injured three separate people Sunday morning outside Target Center in downtown Minneapolis.[KSTP]

Then at 9:17 p.m., police responded to the sound of gunfire near 11th Avenue and Second Street South, near Gold Medal Park. Officers found a man who had been shot, who was then taken to Hennepin County Medical Center in critical condition. Police believe the victim was shot during a carjacking at gunpoint; the gunman then stole his vehicle.

At 11:41 p.m., officers went to check out reports of multiple gunshots near Girard Avenue South and West Lake Street. Police say two victims, a man and a woman, were at the scene with non-life-threatening gunshot wounds. They were both taken to nearby hospitals.

Next, officers heard several shots fired around 1:50 a.m. Sunday in the area of Seventh Street and First Avenue North, near Target Center. Police say they found three shooting victims in the area: two men and a woman. They were all taken to the hospital, and one of the men was in critical condition.

Police recovered two guns at the scene, and two men were arrested and booked into the Hennepin County Jail. As of Sunday morning, their names and booking charges had yet to appear in the jail roster.

Finally, officers were sent to the sound of gunfire near 10th Avenue South and 24th Street East jus after 3 a.m. Sunday. Police say two unoccupied crashed vehicles were in the road. A man who had been shot was found a block away from the crash, and soon after police received a report that a second man had checked into Hennepin County Medical Center with a gunshot wound. Both of them were expected to survive their injuries.

Minneapolis police say all of these incidents are under investigation.