After seating four jurors on Tuesday, jury selection in the trial of former Brooklyn Center police officer Kim Potter got off to a good start in its second day.

Juror No. 17, a white woman in her 20s or 30s who recently graduated from college, was the first juror questioned Wednesday. Questions from Judge Regina Chu, the defense and prosecutors lasted under 10 minutes in total and Juror No. 17 became the fifth juror seated in the case.

Next up was Juror No. 19, a Black woman in her 30s who’s a teacher and mother. She was questioned at length by Chu, defense attorney Paul Engh and Assistant Attorney General Matthew Frank. After it all, she became the sixth juror seated in the case.

The process then slowed down a bit more, as a new panel of jurors had to be sworn in and the next potential juror was questioned thoroughly by the defense. He said he felt it was "a very dumb mistake" for Potter to grab her gun instead of a Taser, and the defense opted to use the second of its five peremptory challenges to dismiss the juror. 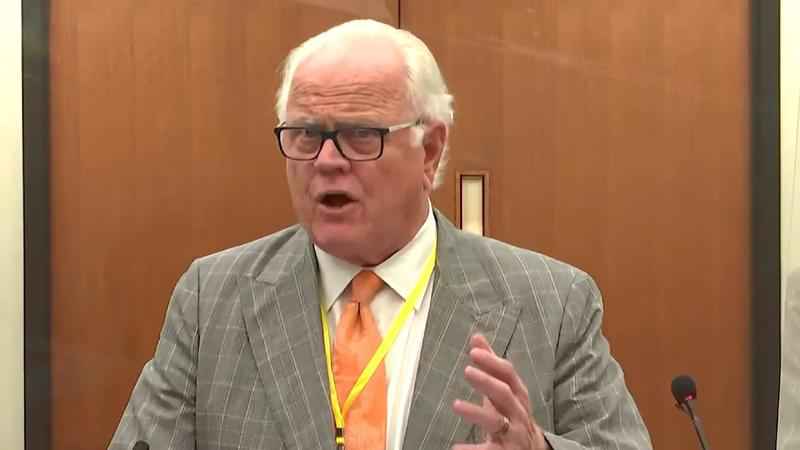 After the court reconvened following morning break, Juror No. 21 — a white, married father in his 40s — entered the courtroom and discussed his excellent experiences with police, his thoughts about why the looting and damage during demonstrations over the past year were bad but the things protesters were saying were important conversations to have, and his dislike of "blue lives matter" because it seems like a marketing move to him. After about 20 minutes of questioning, he was seated as the seventh juror for the trial.

The success continued with Juror No. 22, a white man in his 50s or 60s who’s been a registered nurse since 1994 and whose wife was a law clerk for a judge at one point but has since retired. He said the video of Wright’s death made him believe Potter "possibly made an error" and the demonstrations over the past year have been difficult from citizens all the way up to police officers. The state questioned him thoroughly but he was seated as the eighth juror for the case.

After seating four jurors in the morning, the court took an early lunch break because the next jury panel wasn’t yet ready. In fact, the process went so well that Chu asked the attorneys to consider whether or not they should move up opening statements from its tentative date of Dec. 8. No decisions were made on that Wednesday, however.

After lunch and the swearing-in of a new panel of potential jurors, potential juror No. 25 was called in for questioning at 2 p.m. and said she didn’t think she wanted to be part of the jury. When asked by the defense, she said she might have a bias toward Wright and others who’ve been injured by police. After a couple of sidebars, Chu then granted the defense’s request to have her dismissed for cause.

Just two other potential jurors were questioned before the afternoon break. The first was Juror No. 26, an Asian woman in her 20s, who said she worked at a place that was damaged during demonstrations over the past year and was upset because "the protests were being taken advantage of" by unrelated people. She also said she has final exams in the next couple of weeks, has interviews scheduled, her family and friends are very opinionated on the case and her brother is in the Marines. She also says she can block out her family’s and friends’ opinions and believes it’s her civic duty to serve. She then became the ninth juror seated in the trial.

The final potential juror questioned before the break was a chief procurement officer who was thoroughly questioned by the state and talked about his strong support of and trust in police, plus his opposition to defunding police departments. After about 15 minutes of questioning by the state, the state used its second peremptory challenge to dismiss the juror.

After an extended break, a pregnant south Minneapolis resident is questioned. She said her pregnancy has caused severe nausea and vomiting and she’s been to the emergency room six times, however, despite the unpredictable nature of nausea and vomiting, she thought she could serve. The defense focused on that a bit more and, eventually, Chu granted the defense’s request to excuse her for cause.

The final potential juror questioned Wednesday was a white woman in her 50s or 60s, Juror No. 32. She said she’s previously worked volunteer security at a church and spent two years in the Army in the 1980s. She also owns a gun and had a permit that has since expired. She also noted she’s had to call police multiple times before and has always been satisfied with their work. Of Black Lives Matter, she said the organization "goes too overboard" and "seems like they’re more interested in getting on the news" than helping people. Frank really focused on her trust in police and whether she could be impartial, so much so that the defense objected to his repeated questions and he called for a sidebar. Ultimately, the state used its third and final peremptory challenge to dismiss the juror.

The state now has zero peremptory challenges left while the defense has three.

Before jury selection began Wednesday, Judge Chu advised Potter of her Fifth Amendment right not to testify. Potter affirmed her decision to testify, which her defense team announced during Tuesday’s proceedings. Chu then told Potter that she can still change her mind after the prosecution rests its case.

Click here to read more about Wednesday’s jury selection or watch the proceedings.