The rubber bullet came less than an inch from striking Victor Ramirez directly in the eye.

“It was a pretty good hit,” the 19-year-old said with a smirk, pointing to his temple.

Ramirez went to the Brooklyn Center police station last month to protest the shooting death of Daunte Wright. He returned home with a fractured skull, significant bruising and broken blood vessels in his left eye.

“They’re really just terrorizing the protesters,” said Ramirez, who may need surgery in the future.

Ramirez is one of dozens of protesters, bystanders and journalists around the Twin Cities who have found themselves on the receiving end of what police used to call non-lethal force, but now describe as less lethal. 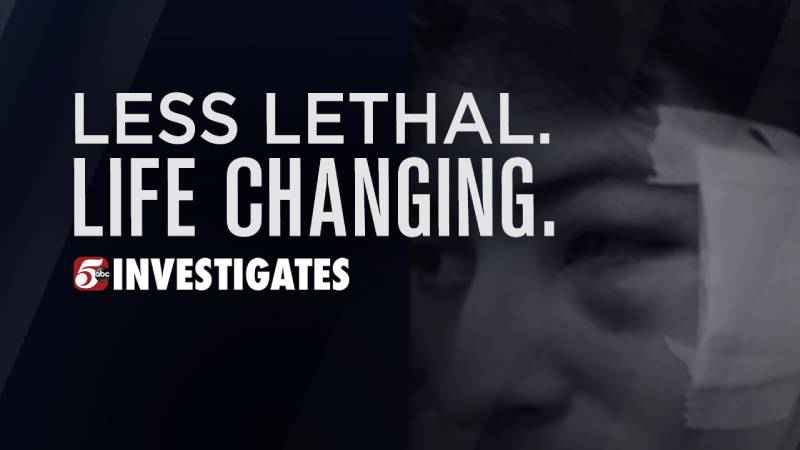 “We don’t like using munitions and gas,” said Hennepin County Sheriff Dave Hutchinson during a recent interview with 5 INVESTIGATES. “These rioters are throwing bricks and rocks and full soup cans and frozen water bottles.”

While police argue it’s a safer tactic to control crowds, medical experts at the University of Minnesota say the force used on protesters over the last year has led to dozens of broken bones, cracked skulls and even blindness.

“That raises a huge red flag,” said Dr. Brooke Cunningham, at the University of Minnesota, who started to track what she and her colleagues describe as a disturbing pattern.

Cunningham joined Dr. David Darrow, among others, and went back and studied medical records at two hospitals in the Twin Cities during a critical three-week stretch right after the death of George Floyd last May.

Their findings, which were published earlier this year in the New England Journal of Medicine, focused on nearly 60 people who were shot by projectiles during the unrest. About 40% of the patients suffered injuries to the head, neck or face.

“The results from our research shows that right now, these injuries are unacceptable,” Darrow said.

The medical community says the substantial number and severity of injuries from less lethal force flies in the face of almost all local, state, and even international guidelines.

The Minneapolis Police Department’s policy clearly states that, when using less lethal rounds, officers should avoid strikes to the “head, neck, or spinal cord” unless, the policy says, “deadly force is justified.”

The United Nations issued guidelines on less lethal force last year that says police around the world should aim at the “lower abdomen or legs.”

“It’s so painful,” said Rawan Abdalla, who got hit in the knee while also protesting the death of Daunte Wright last month.

“It’s dangerous. It is very painful, and for me, for five whole days after I got shot I couldn’t walk,” she said.

The U.N. report also says that rubber bullets should only be used on a “violent individual” posing an “imminent threat.”

“I wasn’t throwing anything, I was just running my mouth,” Ramirez said. “I got my first amendment right.”

Abdalla and Ramirez are now considering legal action against the officers who shot the rounds because they believe the force used was excessive and not necessary.

The experts at the university say the injuries that they have seen suggest less lethal rounds are, at best, inaccurate, and “essentially a liability,” Darrow said.

In fact, earlier this year federal judges refused to dismiss lawsuits filed against the Minneapolis Police Department after two protesters were shot in the face with less lethal rounds following the death of George Floyd.

Soren Stevenson and Ethan Marks both say they may be permanently blind in one eye after taking a direct hit from a rubber bullet.

The judge in Stevenson’s case recently ruled that the evidence presented suggests “a continuing, widespread, and persistent pattern” of excessive force during protests.

A Minneapolis Police Department spokesman has previously declined to talk about the issue of less lethal weapons because of this pending litigation.

There is now a growing push to ban the use of less lethal force altogether. The Minneapolis City Council wants to follow the lead of Brooklyn Center, where police officers were banned from using rubber bullets and tear gas during the unrest.

But the other agencies that responded through Operation Safety Net — including the State Patrol and the Hennepin County Sheriff’s Office — continued to use less lethal force.

Hutchinson told 5 INVESTIGATES that the rubber bullets were used Brooklyn Center in response to the threat they received that rioters wanted to burn the police station down.

“No law enforcement agency, especially no sheriff or chief wants to do that," he said. "We were responding to acts of violence from rioters."