Police say three men — none of whom have been identified — died in separate shootings that happened within hours of each other.

“A very sad night for St. Paul. Summer is just started, and we’re already seeing an increase violence and violent crimes and crimes involving guns. We’ve already had more than 90 people shot this year, which is about 10 or 12 ahead of last year’s pace,” said Steve Linders, the Public Information Manager of the St. Paul Police Department.

The first shooting happened in the city’s North End neighborhood on the 200 block of Maryland Avenue at about 10:30 p.m. Thursday.

When officers arrived, they found they found a man lying in the street near the intersection of Maryland and Matilda Street. He died at the scene. 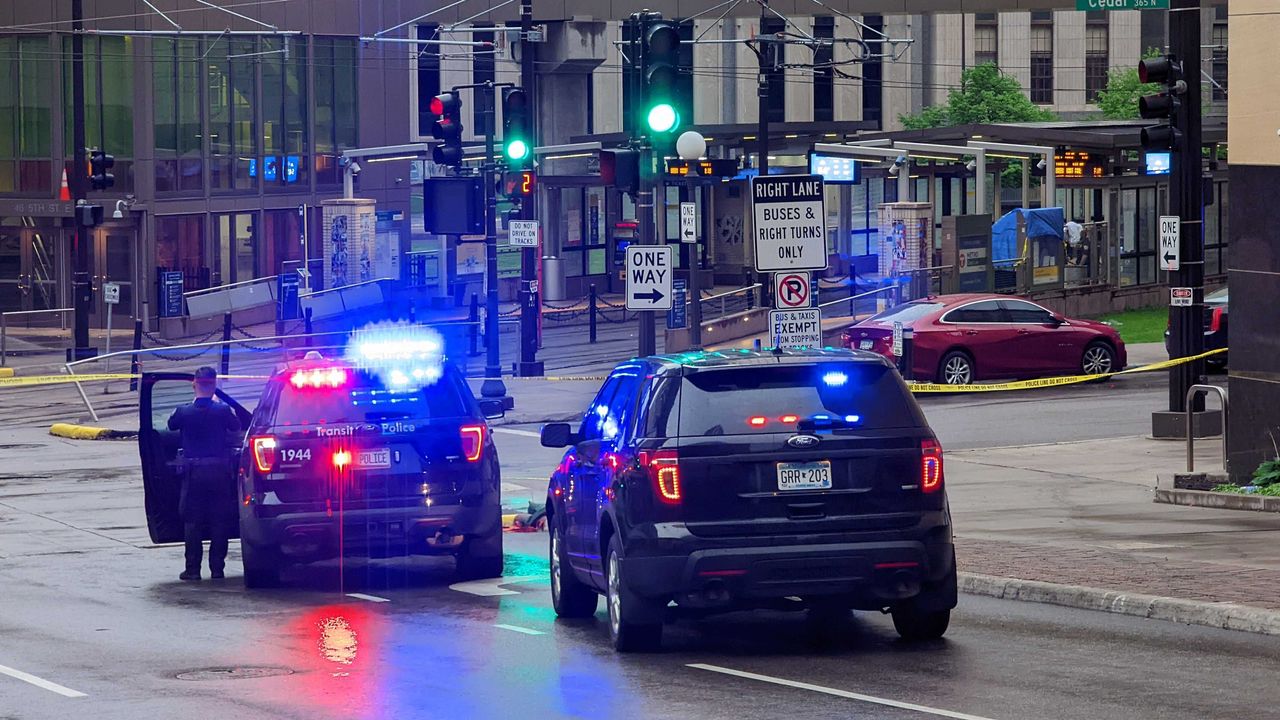 Officers were at the active scene in the area of Cedar Street and Fifth Street. (KSTP/ Nate Bergeson)

No one is in custody for this shooting, and police are searching for possible witnesses.

Then, at about 12:15 a.m., police say officers were called to the city’s Frogtown neighborhood after a woman reportedly called dispatch to report a man had been shot inside a car near the intersection of Sherburne Avenue and North Mackubin Street.

When officers arrived at that scene, they found a man in his 30s who had been shot. He was taken to Regions Hospital, but died three hours later.

Police say a 28-year-old woman was arrested and is being held on charges of aggravated assault, however, investigators are trying to determine what led up to the shooting.

A third shooting happened around 4 a.m. near Sixth and Cedar streets. Police told 5 EYEWITNESS NEWS Friday morning that one person, identified as a man, died at the scene.

As of this time, there are no suspects and no arrests in that shooting. Metro Transit police are investigating the third shooting.

No other immediate details were available on that incident.

Previously, Metro Transit said Green Line trains weren’t running between those stations due to police activity. In another update, they said the Green Line is delayed in both directions due to that activity near Central Station, and they are working to pull additional trains to help with service times.

Autopsies will be done on the victims to identify them and determine the exact causes of death. Their deaths mark the 16th, 17th and 18th homicides of the year in St. Paul.

“We need the community members to step up too and help us out, so get involved,” said Linders. “If you know who’s carrying the guns illegally call us, if you know who’s pulling the trigger, call us. If you have concerns call us so we can intervene before another tragedy happens.”

5 EYEWITNESS NEWS reporter Eric Chaloux says candles could be seen at at least one of the three homicide sites throughout the city late Friday morning.

This is breaking news. KSTP is working to get more details and will post updates as more information becomes available. Stay with 5 EYEWITNESS NEWS and KSTP.com as we follow this news. Refresh your page to make sure you are seeing the most current information.