27 people arrested after second night of unrest in Uptown 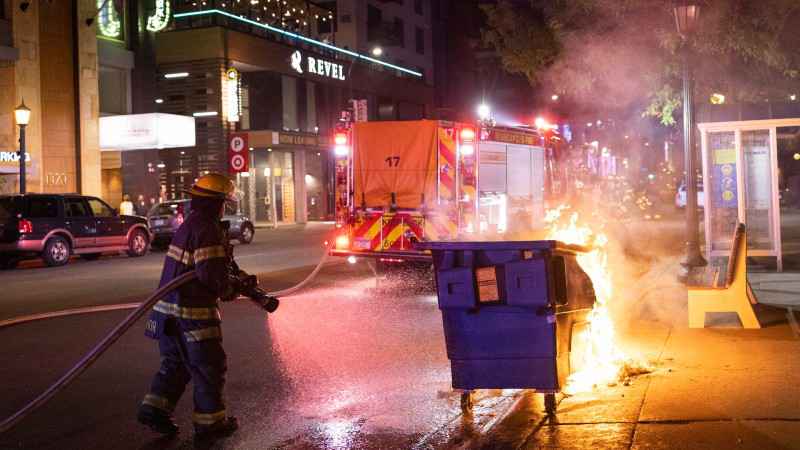 A firefighter puts out a dumpster fire after protesters clash with police following a vigil that was held for Winston Boogie Smith Jr. on Saturday, June 5, 2021. Authorities said Friday that a man wanted on a weapons violation fired a gun before deputies fatally shot him in Minneapolis, a city on edge since George Floyd's death more than a year ago under an officer's knee and the more recent fatal police shooting of Daunte Wright in a nearby suburb. [Christian Monterrosa/Associated Press]

Minneapolis police say 27 people were arrested Friday night in connection with unrest near the Uptown parking ramp where members of a fugitive task force shot and killed an armed suspect on Thursday.

According to Minneapolis police spokesman John Elder, 26 people were arrested on probable cause riot, and one was arrested on suspicion of a weapons violation.

Police say people in the area of West Lake Street and Fremont Avenue South damaged property and vandalized buildings, but no looting was reported.

The Minneapolis Fire Department responded to several fires in the area. Police say dumpsters and trees were lit on fire, among other items. No injuries were reported.

This marks the second night of unrest in Uptown after deputies serving on the U.S. Marshals Service-led North Star Fugitive Task Force shot and killed 32-year-old Winston Smith, who had an arrest warrant for alleged unlawful possession of a firearm by a felon.

According to the Minnesota Bureau of Criminal Apprehension, the agency investigating the shooting, task force members cornered Smith, who was inside a vehicle, at the parking ramp. While officers tried to take Smith into custody, he took out a handgun and shot at least once at law enforcement, who returned fire.

Smith was pronounced dead at the scene.

The BCA says two sheriff’s deputies — one each from Hennepin and Ramsey counties — shot at Smith during the exchange.