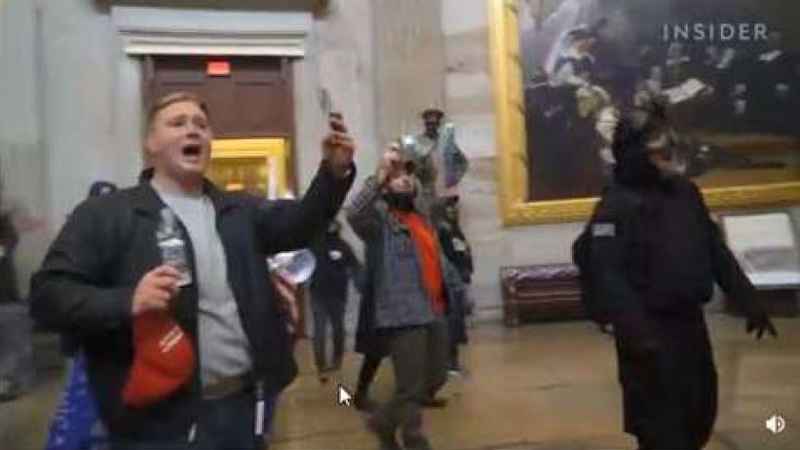 Jonah Westbury, 26, of Lindstrom, Minnesota, is seen inside the U.S. Capitol during the Jan. 6, 2021, riot. FBI special agents arrested Westbury on Friday, April 9, 2021, in connection with his participation in the insurrection.[FBI]

For the second time this week, a Minnesotan has been arrested in connection with the Jan. 6 storming of the U.S. Capitol.

FBI special agents arrested Jonah Westbury, 26, of Lindstrom, on Friday. According to the statement of facts linked to his arrest, the FBI received tips from two separate people within days of the riot in Washington, D.C.

The day after the attack, one person who said they went to high school with the suspect told the FBI they had seen him inside the Capitol in videos posted to social media, first on TikTok. The source said they also came across a video on Twitter that had originally been posted to Snapchat in which Westbury narrated his foray into the Capitol.

On or around Jan. 9, another tipster named someone other than Westbury in a video that had been posted to Reddit, but after further investigation, it was determined that the person the tipster identified was, in fact, Westbury because his attire matched what he was wearing in the videos uploaded to Snapchat.

The FBI was able to collect several videos from a Snapchat account belonging to Westbury that depict him inside the Capitol. The videos show the entryway of what appears to be the Capitol and later entering the building with a crowd of people.

He faces four federal charges: two separate counts of disorderly and disruptive conduct; one count of entering and remaining in a restricted building and grounds; and one count of parading, demonstrating or picketing in the Capitol building.

Westbury’s charges were announced the day after those of another Minnesotan, 39-year-old Victoria White of Rochester. She faces six separate charges for her involvement in the Jan. 6 insurrection at the Capitol.