Two suspects have been charged with a dozen felonies each in connection with a shootout that killed 27-year-old Marquisha Wiley and injured 14 others early Sunday morning in St. Paul’s entertainment district.

"I can’t be more proud of the life-saving measures they took with our fire department, paramedics — bring calm to a chaotic situation — just a tragic situation where there was so much blood, so much chaos, conflict going on at the time, and gathering the evidence necessary to bring to the prosecutor to help us hold people accountable," St. Paul Police Chief Todd Axtell told 5 EYEWITNESS NEWS.

"What I can tell you this was a conflict between multiple people who, normally in the past through my experience, would have solved it through a physical confrontation — pushing, shoving, punching — again this is another example of somebody pulling a gun out of their waistband, firing at each other to solve that difference, to settle that dispute," Axtell said.

"I know there have been people who have been arrested in this case who aren’t legally allowed to carry a gun; in some point, we need to draw that line to ensure accountability so that future victims don’t have to go through the same thing," the chief added. 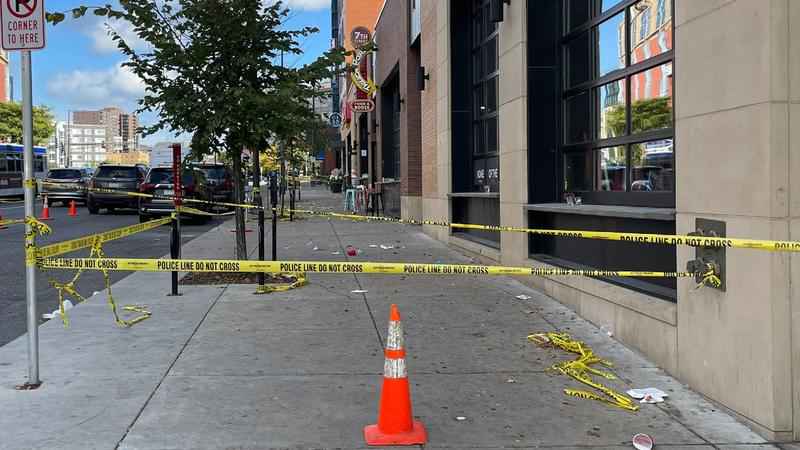 Police tape blocks off Seventh Street Truck Park, where 15 people were shot and a woman were killed on Sunday, Oct. 10, 2021.[Brittney Ermon/KSTP]

According to a criminal complaint, police responded to a report of a shooting at Seventh Street Truck Park at 214 West Seventh Street around 12:15 a.m. When officers arrived, they encountered a "chaotic scene" with multiple people who had been shot.

Wiley was being carried with a gunshot wound to her back, the complaint states. She was not moving. Officers briefly found a pulse, but it disappeared after a few seconds. A medic pronounced her dead minutes later.

The Ramsey County Medical Examiner determined Wiley died of a gunshot wound that punctured her left lung and heart.

"My heart drops, I think about the impact, the human toll it takes on city, and the victims who have been injured by gunfire," Axtell said.

Both of the suspects were taken to hospitals to be treated for gunshot wounds. Brown was taken to Hennepin County Medical Center, and Phillips was taken to Regions Hospital. By the time Phillips was out of surgery, officers who were reviewing surveillance video determined he was one of the shooters.

Police say a third person, Jeffrey Hoffman, was also taken into custody but remained at the hospital.

Police said the suspects would be booked into the Ramsey County Jail once they were discharged. A judge has ordered Brown and Phillips to be held on $10 million bail.

The complaint lists 11 other victims — five men and six women — who were taken to hospitals in the area. So far five of the victims have been treated and discharged.

That video captured an interaction between Phillips and a man who was with Brown that allegedly led up to the shooting.

Phillips was talking to two women at the bar when a 32-year-old man identified as "JH" told one of the women to walk with him toward the end of the bar. Phillips then stopped talking to the other woman and went back with the rest of his group, the complaint states.

Brown then entered the bar with a man with dreadlocks. JH spoke to Brown and the other man while looking over at Phillips, who had his back to them. JH then walked up to Phillips while the man with dreadlocks tried to catch up to him. Brown stayed back and watched from about 15 feet away, the complaint states.

Surveillance video then shows Phillips shooting JH in the abdomen. Phillips walked toward the door and raised a gun at Brown. Phillips was in between Wiley and Brown when he fired his gun. Brown shot back.

Wiley’s back was turned toward Brown when he fired from the ground. Video shows an apparent defect on her shirt near her left shoulder after Brown started shooting.

The two had fallen to the floor and continued shooting at each other. Brown tried to stand up but he immediately fell down because he had broken his leg, the complaint states.

Several witnesses told police they disarmed Brown while he was on the floor of the bar. One witness said they repeatedly punched Brown’s face, and Brown asked the witness why he was hitting him. The witness then told Brown to "Drop the f—ing gun," according to the complaint.

At that point, the complaint states, a different witness grabbed the gun, carried it outside and set it on the ground. A security guard stood over the gun, a KAHR Arms 9 mm handgun, until police collected it. Brown pleaded with a guard, "Don’t let the police get the gun … the light-skinned guy shot me first."

Phillips managed to make his way out of the bar. According to the complaint, he limped down the street to a Honda Civic, got inside and then fell to the street until emergency responders tended to his wounds. A search warrant was later executed on the Civic, and a handgun was found inside.

JH was admitted to Regions Hospital with two gunshot wounds to the stomach. He told investigators he went to the bar with Brown and that he "messes with" one of the women who was talking with Phillips. The complaint states JH denies being upset over Phillips talking to the woman and claimed he only said, "What’s up?" when he walked over to Phillips.

Brown told police Phillips was a relative of the woman he is dating and that he and Phillips are "in a beef" over alleged domestic abuse between Brown and his girlfriend. Brown said Phillips shot at him first and admitted that he carried a firearm illegally.

In an interview with investigators, Phillips denied his involvement in the shooting, even when he was told the events were captured on surveillance cameras.

Brown has five prior felony convictions for robbery and drug-related offenses that make him ineligible to carry a gun. Phillips has a previous aggravated robbery conviction that excludes him from carrying a gun.

Brown and Phillips were expected to make their first court appearances Tuesday morning.

Editor’s Note: A previous version of this report indicated Phillips was charged with 12 counts of second-degree murder. Phillips has been charged with 12 counts of attempted second-degree murder. The copy has been updated. A previous version of this report also indicated Terry Brown is 31. Brown’s age has been corrected to 33.