Burnsville firefighters investigating apartment complex fire as an arson, say a male suspect is in custody

The cell phone video, shot by a resident, shows a cloud of white, billowing smoke.

Other photos show blackened, damaged hallways in one of the buildings at the Parkvue Flats Apartments in Burnsville.

“I looked out my window, and I saw there was a bunch of cops and people outside,” recalls Grace McGuire, a two-year resident. “And I see the entire side of the building, right over there, is just burnt.”

Now — Burnsville Police and the Burnsville Fire Department have launched an arson investigation.

“We do believe this was an intentional act,” says Fire Chief BJ Jungmann. “It started as a domestic incident, other than that, I can’t say much until we investigate it further, other than we have a suspect in custody.”

Burnsville firefighters were called to the complex, on the 1500 block of East Burnsville Parkway, around 8:50 Saturday morning. 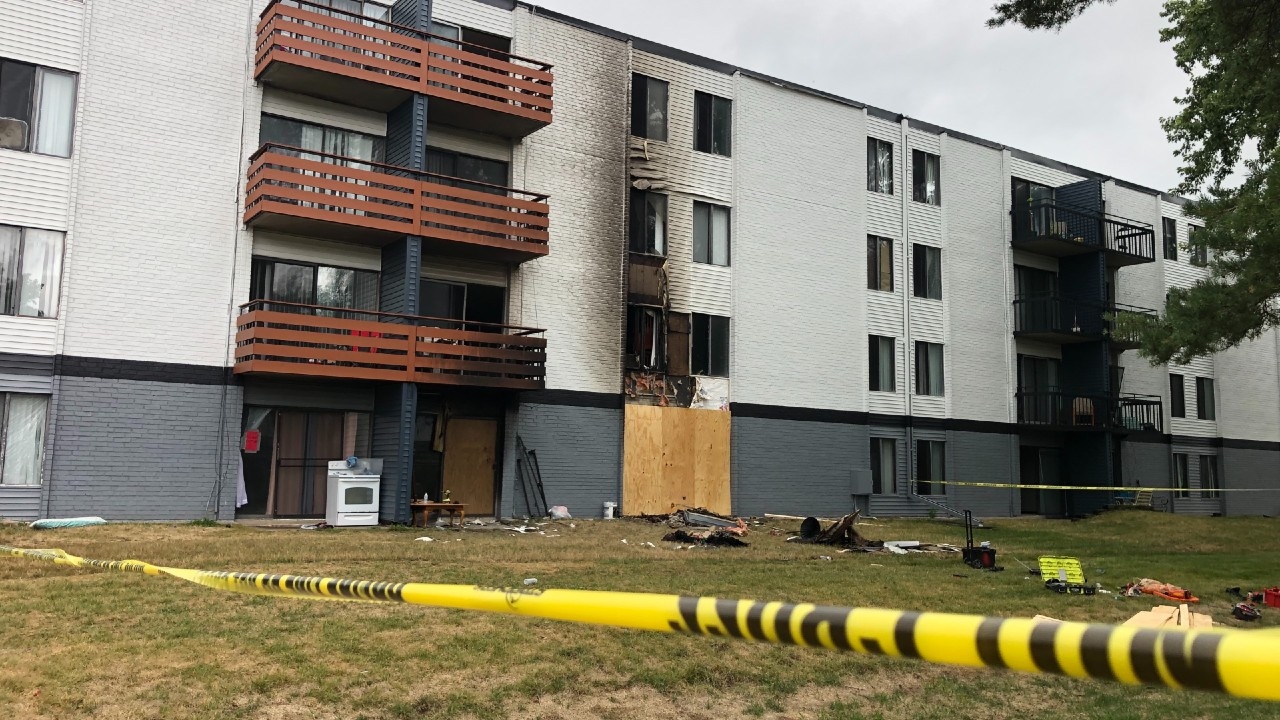 The aftermath of a fire at Parkvue Flats Apartments in Burnsville (KSTP).

Arriving crews spotted heavy smoke and fire climbing up a rear wall from a first-floor unit, where authorities believe the blaze began.

“We had numerous occupants that had not evacuated at that point when the alarms were sounding,” Jungmann tells 5 EYEWITNESS NEWS. “(Firefighters) worked diligently to get people out as well as put out the fire, and this was during the heavy rain. So those conditions made it even more difficult to set up and operate.”

The chief says it took more than 30 firefighters, with mutual aid help from Apple Valley and Eagan — about an hour to get the blaze under control.

Jungmann says fire crews evacuated about 100 people, half of them displaced because of heat and smoke damage, and electrical and fire system issues.

“It’s not safe for them to reoccupy, so thankfully Red Cross and the Salvation Army have come out to help those that are displaced,” he explained. “Until it’s safe again, we don’t want them living in there and creating any risk for them.”

It’s not yet known when the displaced residents will be able to return home.

“It was real bad,” declares Giselle Riosmillan, who says for now she’ll stay with family members.

She says she was allowed to briefly go back inside to retrieve a few personal items.

“We live on the fifth floor, we live basically in the middle, but you can still smell, and it smells really bad,” Riosmillan says. “Just going up the stairs for a minute, it just hurts your head.”

Authorities are identifying the person in custody only as a “male suspect.”

Jungmann says his department, partnering with Burnsville Police, will present any evidence to Dakota County prosecutors.

The chief says one person was transported with minor injuries — and one firefighter was treated at the scene.

He says the fire could have been much worse if more flames had penetrated inside, instead of running up the exterior back wall.

Still — the notion that someone might have deliberately set the building ablaze has left residents shaken.

“That’s crazy,” McGuire says. “I mean, you never think something like that would happen, like in your own complex, but apparently that does, and so close to home, too.”