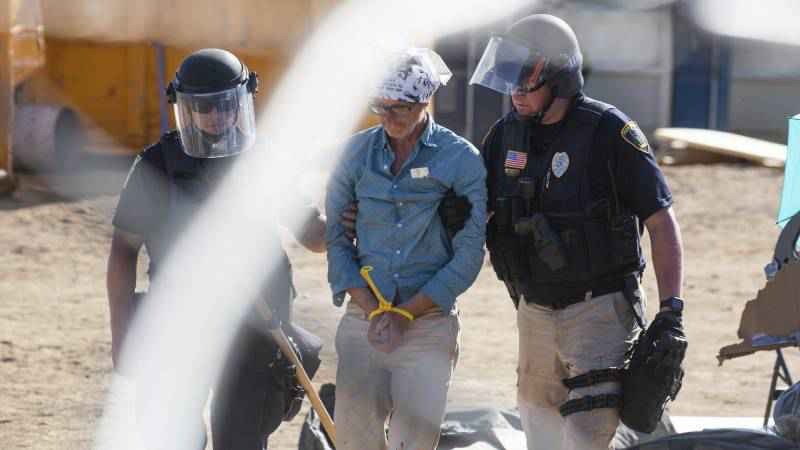 The Hubbard County Sheriff’s Office says nearly 180 protesters were arrested on Monday, noting that they caused an "extensive amount of damage" to Enbridge Line 3 Pipeline equipment.

Officers from 31 different law enforcement agencies assisted in the removal and arrest of the protesters. In total, 179 protesters were arrested and charged with trespassing, and 68 additional people were cited with public nuisance and unlawful assembly.

On Monday at 7:38 a.m., the Hubbard County Sheriff’s Office received a report of about 20 pipeline protesters on foot approaching a pumping station, located on 300th Street, north of Park Rapids. Authorities say more calls were made to the sheriff’s office reporting additional protesters on site attempting to allegedly scale the fence with ladders.

Protesters have been fighting the Canadian-based company’s push to replace an aging pipeline across the northern part of the state this summer as the Minnesota segment of the pipeline is about 60% complete as of Monday.

As Hubbard County deputies responded, further reports were made that stated the crowd grew to around 300 people at the Enbridge property. According to a release, there were 43 employees unable to exit the property due to the protesters locking them in behind the front gate.

Officers saw numerous vehicles parked along Highway 71 with numerous protesters walking on the roadway creating a traffic hazard. As Enbridge employees were eventually able to exit the premises, it was learned by police that protesters had caused a large amount of damage to equipment and other assets. Protesters assembled barricades inside the fenced-in area of the pumping station, according to the sheriff’s office. Additionally, it was noted that they put up barricades across the roadways and dug trenches across the township roads.

Protesters also hauled in a large boat where approximately 20 protesters then chained or attached themselves to it. Police say as the number of protesters grew to an estimated crowd of 500 people, additional law enforcement personnel were called to assist with the crowd. Authorities noted these individuals were trespassing and committing acts of criminal damage to property.

The sheriff’s office said the protesters left a boat, garbage and feces in the roadway, and caused an "extensive amount of damage" to equipment.