10 vehicles involved in crash along Hwy 169 at I-94, slick road conditions reported

Highway 169 has reopened after being temporarily closed in both directions near Brooklyn Park and Maple Grove due to a crash involving 10 vehicles at Interstate 94.

KSTP Traffic Reporter Josie Smith said crashes were reported on both sides of the highway at this scene.

Smith said serious injuries were reported and that ambulances were at the scene.

A preliminary report from the Minnesota State Patrol states one of the occupants of a vehicle in the pileup exited their vehicle and was hit by another vehicle. 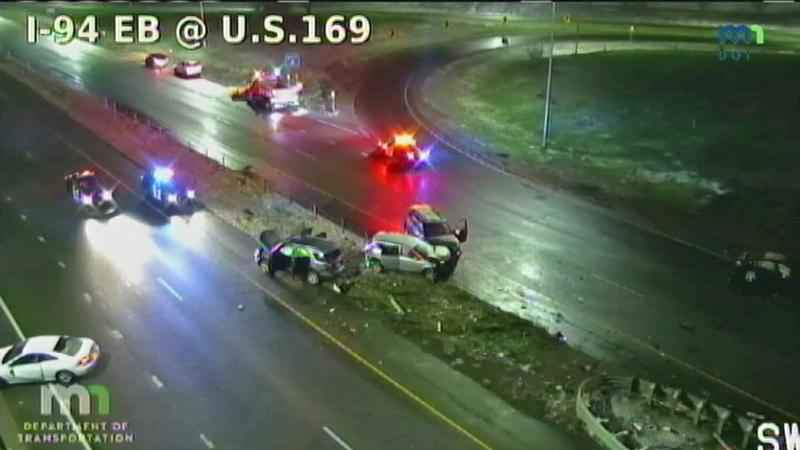 Highway 169 was temporarily closed in both directions near Brooklyn Park and Maple Grove due to a multi-vehicle crash at Interstate 94.[MnDOT Traffic Camera]

That person was taken to a nearby hospital with serious injuries.

This view from Hwy 169 SB just past I-94. Ambulance on scene. https://t.co/wiagwePlXs pic.twitter.com/TBKWs96qFO

Then, along northbound Interstate 35 at County Road 50 in Lakeville, Smith said a pickup truck was righted after its driver lost control of the vehicle and it spun out.

Smith said the interstate was temporarily closed to traffic due to the crash. Drivers were eventually allowed to pass the scene via the right lane.

Rollover! This pickup truck is back on its wheels now after losing control on I-35 NB at Cty Rd 50 in Lakeville. Getting reports that it is slick in this area. https://t.co/wiagwePlXs pic.twitter.com/zxCXfUz3Jy

Smith also said icy bridge decks were reported throughout the metro and that a crash along northbound Cedar Avenue at I-35E occurred on a bridge.

Continuing to get reports of icy bridge decks! Crashes here along Cedar Ave NB at I-35E and Hwy 610 WB at Hwy 169. https://t.co/wiagwePlXs pic.twitter.com/ES1HOPAh03