Protesters are gathering outside the Brooklyn Center Police Department for the seventh night in a row to demand justice for Daunte Wright, a Black man who was fatally shot during a traffic stop Sunday.

Kim Potter, the officer who shot Wright, has been charged with second-degree manslaughter. Investigators believe she intended to deploy her Taser and drew her sidearm by accident while attempting to subdue Wright.

The Minnesota Operation Safety Net announced Sunday morning that a total of one arrest was made Saturday night relating to the protest. 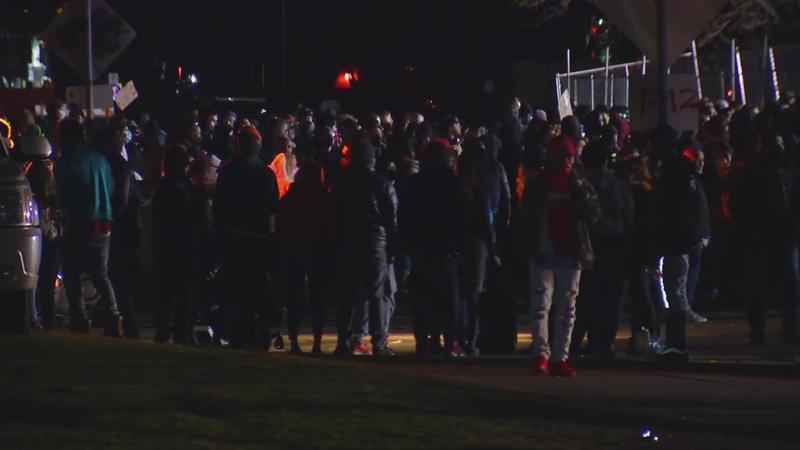 Curfew is now in effect, and the crowd is starting to thin out. Police have not issued any dispersal orders so far.

The curfew is now in place. The crowd has thinned out some but so far, I haven’t heard any announcements from law enforcement. pic.twitter.com/XFpSyDIHvs

KSTP reporter Callan Gray says protesters have started to leave the area, but there is still a sizeable vocal group remaining as the city’s 11 p.m. curfew draws nearer.

In past nights, some demonstrators have rattled and attempted to break through the fence surrounding the police department, but that has not been observed yet tonight. Our crews have captured interveners escorting some people away from the protest throughout the night.

Despite curfew being less than 90 minutes away, people are still arriving at the police station. The crowd is relatively calm, with a drumbeat leading chants of "No justice, no peace!"

Several hundred people have turned out so far, according to KSTP reporter Richard Reeve. He also noted the street is more brightly lit than in past nights.

Night has fallen, and the crowd outside the police station is growing larger. Demonstrators are lining up near the barrier and chanting "Black Lives Matter" and Daunte Wright’s name.

Officials say the secondary layer of fencing surrounding the police station was breached Friday night; so far protesters are not trying to break it down.

According to KSTP reporter Richard Reeve, protesters outside the police station have been singing, praying and chanting Daunte Wright’s name. Protesters have affixed a sign reading "Stop State Terror" to the outer layer of fencing around the compound.

A citywide curfew goes into effect at 11 p.m., and Mayor Mike Elliott has asked law enforcement not to use tear gas, rubber bullets, marking rounds or other devices on protesters.

This is a breaking news story. Stay with 5 EYEWITNESS NEWS for the latest updates.