Revolutionary technology is helping patients at Allina Health’s Courage Kenny Rehabilitation Institute get back on their feet. The Lite Run system was designed to reduce the weight a patient needs to support themselves.

“I love it because I can start walking again,” said Tony Lancaster, a Courage Kenny patient. “I actually walked the farthest I’ve walked in a long time.”

Lancaster has spent months rebuilding his strength after a stroke in November. The bleeding on the right side of his brain caused paralysis on the left side of his body.

“Last thing I remember is being put in an ambulance,” he said. “I couldn’t walk, I couldn’t even stand.”

His father, Bob Lancaster, rushed to the hospital. 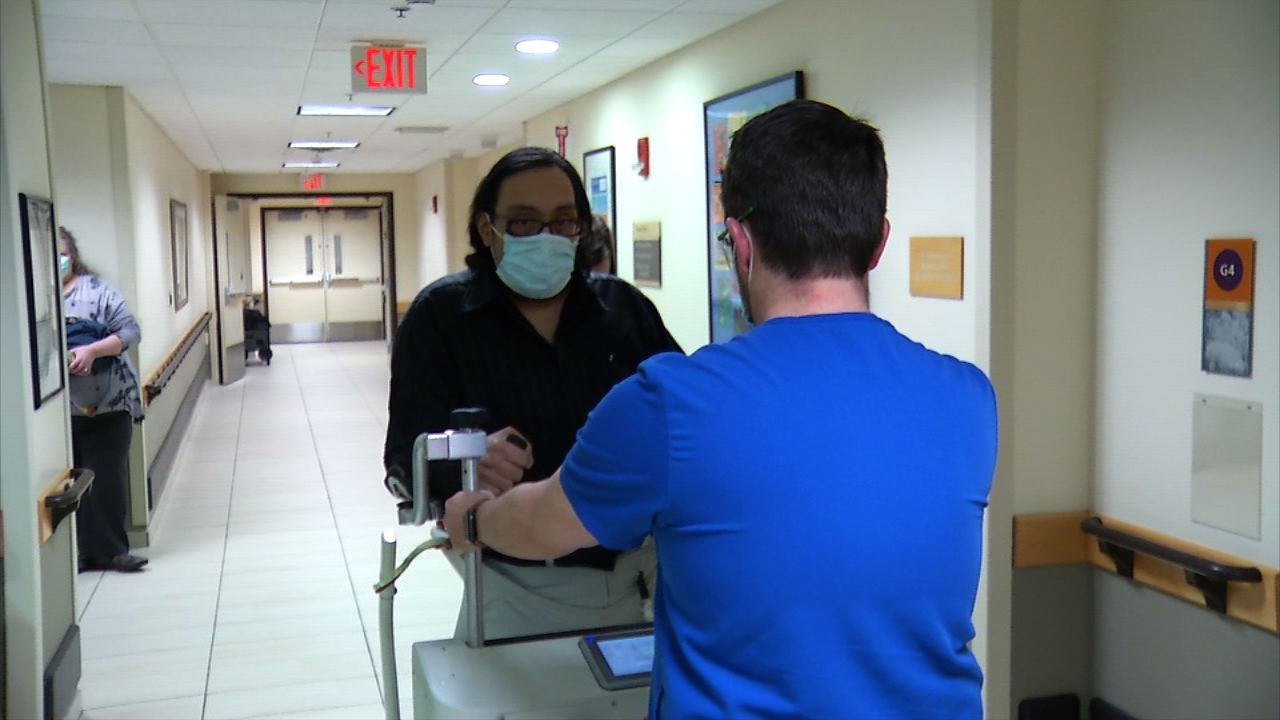 “The prognosis that was given to me was that he wasn’t going to make it,” said Bob Lancaster. “When I came upon him in the room that morning, he wasn’t moving. He was motionless.”

A few moments after his father walked into the room and spoke to him, Tony reached out his hand.

Together with two physical therapists, they did laps at Courage Kenny this week. Tony was assisted by the Lite Run system.

“Amazing to say the least,” said Bob Lancster. “As a parent, words just can’t describe it.”

The technology includes a pants that resemble snow pants. Therapists fill the pants with air, an amount which they can adjust. The air pressure essentially lifts the patient, reducing their body weight.

“One thing I like to compare it to is walking on water, where water will kind of lift you up and take some of the weight off of your feet,” said Dan Frush, a physical therapist at Courage Kenney. “Feels a little bit more natural than the other options out there that might be a little bit more mechanical.”

“I think on the surface it can look a little silly and you think ‘How is this really going to work?’ but then you start using it and then you see ‘Oh so and so could only walk 50 feet the other day and now they’re walking 500 feet in this’,” said Frush. “When you’re working with people who have these kinds of injuries, repetition is kind of the thing we’re always searching for because that is what is going to heal them.”

He estimates 10 to 15 patients have benefited from the technology since they started using it in January.

“Nearly all of our patients here are going through a life-changing event so there’s a lot of uncertainty when they get here,” said Frush. “I think it’s really exciting to see people kind of start to feel a little bit more normal again, do something they’re used to.”

Lancaster recently started using the Lite Run system. Friends who have been by his side throughout his recovery have noticed a positive change.

“It’s been amazing to see, even just his excitement in getting better and starting to walk more,” said Richard Rucker, who has been friends with Tony for 20 years. “Helping him with self-esteem, it’s helping him with every aspect.”

Rucker was with Tony the night before he suffered his stroke and told us he didn’t notice any sign his friend was about to have a life-threatening emergency.

“Got the call the next day from his roommate that he had had the stroke,” said Rucker. “They were saying it was really grim and we should brace for the worst that he wasn’t going to be waking up.”

Over the past several months, loved ones say they’ve witnessed Tony’s determination to recover.

“He’s just so proud of himself,” said Diane Pfeffer, another long-time friend. “Tears of joy to see him making the progress he has.”

Movement is an essential part of Lancaster’s life. He performs in drag shows across the Twin Cities.

“My greatest fear was, because he’s a performer and that’s his love is that stage, that hearing he was paralyzed scared me that he may never do that again,” said Pfeffer.

The team at Courage Kenny has worked his muscles to develop strength and endurance. He can now stand up and walk with assistance.

“It’s been a long, hard journey, a lot of blood, sweat, tears, pain, sore muscles, a lot of pinched nerves, all of that, make it all worth it just so I can get back to having my life back,” said Tony Lancaster. “I’ve been very fortunate, very blessed and highly favored.”

This week, he was able to stand up and hug his father who was visiting from Connecticut.

“If anyone had seen him that day and saw what we saw today, it’s beyond amazing beyond words,” said Bob Lancaster.  “Great strides and I know more are coming.”