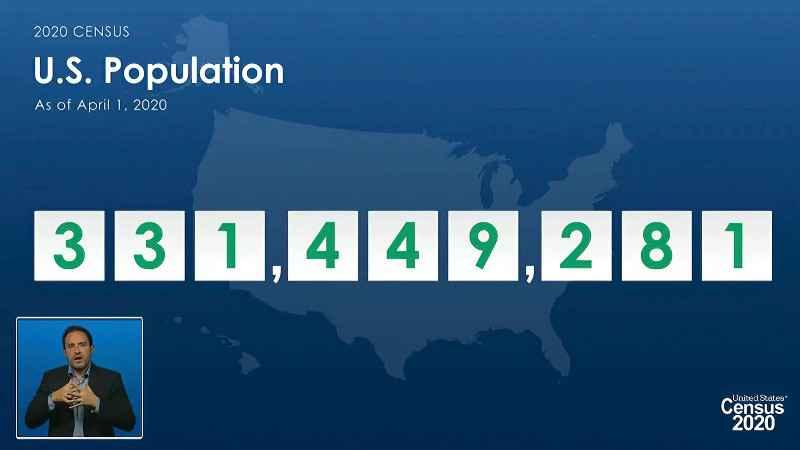 FILE- In this file image from video provided by the U.S. Census Bureau, a sign language interpreter, lower left, signs for acting director of the U.S. Census Bureau Ron Jarmin, who is speaking off camera, as a graphic showing the U.S. population as of April 1, 2020, is displayed during a virtual news conference. When U.S. Census Bureau workers couldn't find out any information about some households after repeatedly mailing them questionnaire reminders and sending census takers to knock on their doors, the statisticians turned to an obscure, last-resort statistical technique known as “imputation.” Less than 1% of households were counted using the technique during the 2020 census. But some conservative political groups are questioning it, potentially laying a foundation for legal challenges to the data that will ultimately be used for drawing congressional and legislative districts.[U.S. Census Bureau via AP]

The 2020 census is expected to cost $14.2 billion, well below a previous estimate of $15.6 billion, reflecting a slowdown in the price tag for the nation’s headcount thanks to technological innovations, according to a new watchdog report released Monday.

The lower cost came even though the Census Bureau spent an extra $1.1 billion responding to the pandemic, whose spread in the U.S. coincided with the start of the nation’s head count for most U.S. residents in March 2020.

Technological innovations allowed most households to answer the census questionnaire online for the first time instead of just by mail or phone, surprising statisticians with a self-response rate that exceeded expectations.

The innovations also permitted census takers to take down answers from households using mobile devices that also created the most efficient routes for census takers to follow when going from home to home, according to a report from the Government Accountability Office.

Cost savings came from the bureau’s opening fewer field offices and using administrative records to fill in answers for households that didn’t respond on their own or didn’t open their doors to census takers seeking answers about their households, the report said.

The per-household cost of the 2020 census wasn’t significantly more than it was in 2010 — $96 per household versus $92 per household. By contrast, it had been jumping decade to decade before that, rising from $16 per household in 1970 to $80 per household in 2000. At the same time, self-response rates had declined, requiring more money to pay for census takers to knock on the doors of people who hadn’t yet answered the questionnaire, the report said.

“This suggests that even with the expenses associated with COVID-19, the Bureau moderated the historically rising cost curve of the census," the GAO report said.

The pandemic caused delays in operations, forced the bureau to extend the deadline for ending field operations by several months and necessitated the purchase of millions of gloves and masks for census takers.

The once-a-decade census determines how many congressional seats and Electoral College votes each state gets, as well as the distribution of $1.5 trillion in federal spending.