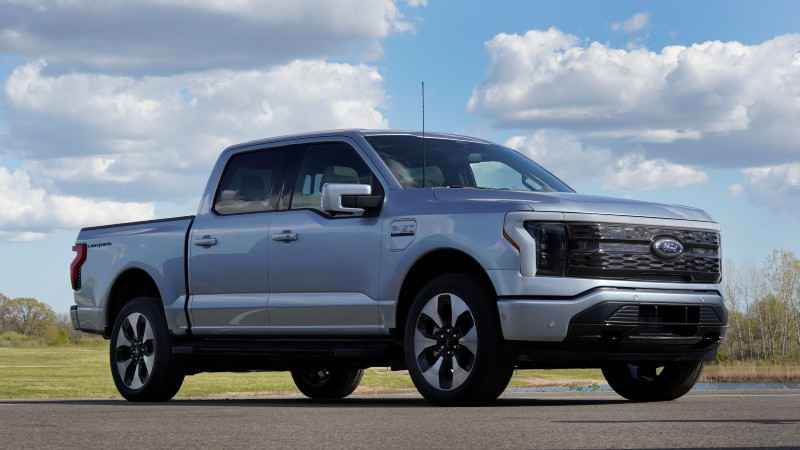 pre-production Ford F-150 Lightning is shown in Bruce Township, Mich., May 12, 2021. The electric truck is aimed at the heart of the American auto market, a deliberate effort by Ford to move electric vehicles from specialized niche products to the mainstream.[Paul Sancya/Associated Press]

On the outside, the electric version of Ford’s F-150 pickup looks much like its wildly popular gas-powered version. Yet the resemblance is deceiving. With its new battery-powered truck, Ford is making a costly bet that buyers will embrace a vehicle that would help transform how the world drives.

Branded the F-150 Lightning, the pickup will be able to travel up to 300 miles per battery charge, thanks to a frame designed to safely hold a huge lithium-ion battery that can power your house should the electricity go out. Going from zero to 60 mph (97 kilometers per hour) will take just 4.5 seconds.

With a starting price near $40,000 (before options), Ford has calculated that an electric version of America’s top-selling vehicle will appeal to the sorts of buyers who favor rugged pickup trucks prized for strength and durability. If it succeeds, it could speed the nation’s transition away from petroleum burners — a cornerstone of President Joe Biden’s broad effort to fight climate change.

“It’s a watershed moment to me,” Ford CEO Jim Farley said of the electric truck, which was formally unveiled Wednesday night. “It’s a very important transition for our industry.”

For the Biden administration to prevail in its push for green energy-driven manufacturing, it will need to overcome resistance as well as skepticism. Critics fear the loss of auto industry jobs in a shift away from gasoline-fueled vehicles. Because EVs are much simpler, it takes fewer workers to build them. And bottlenecked supply chains could leave automakers short of computer chips and vehicle batteries, along with other parts, for months and perhaps years.

That said, a vehicle like the Lightning is so critical to Biden’s policies that even before its formal unveiling, he visited the Ford plant in Michigan where it will be built beginning next year. The president even drove the truck on a test track.

“This sucker’s quick,” he declared.

For its part, Ford is taking a significant risk by sinking so much capital into an electric version of a pickup that commands a huge and loyal following. In a typical year, Ford sells about 900,000 F-series trucks nationally. It has been America’s top-selling vehicle for nearly four decades.

Gas-powered F-150s are staples on job sites across the nation, where workers haul equipment and materials and often don’t see a need for change. So it could be years before Ford realizes a return on its investment in an electric F-150. This year, through April, the company has sold only 10,000 of its new gas-electric hybrid F-150s — just over 6% of the F-150’s total sales.

Still, introducing a capable electric truck at a fairly reasonable price could potentially produce the breakthrough that draws many more people to battery-powered vehicles of all sizes, said Ivan Drury, a senior manager at Edmunds.com.

“If you’re going to choose one vehicle in the industry that’s going to do it, this is going to be the one,” Drury said. “I expect this to be a home run, and I expect it to really convert a lot of consumers’ minds."

At the same time, the electric truck, due in showrooms by the middle of next year, comes at a time when American drivers remain reluctant to jettison gas vehicles. Through April, automakers sold about 108,000 fully electric vehicles in the U.S. Though that’s nearly twice the number from the same period last year, EVs still account for only 2% of U.S. vehicle sales, according to Edmunds.

In addition to the Lightning, though, the growing number of fully electric offerings will help raise sales numbers. Automakers now sell 18 electric models in the U.S.; Drury expects 30 by year’s end.

To be sure, Ford won’t stop building gas-powered trucks for years. They remain an enormous cash cow. A study by the Boston Consulting Group found that the F-Series generates $42 billion in annual U.S. revenue for the automaker — more than such entire companies as McDonald’s, Nike or Netflix do.

Initially, Ford expects Lightning customers to be mainly higher-income urban and suburban residents who seldom go off road or use truck beds to haul anything heavy. But the company plans a commercial version designed to make work more efficient. Ultimately, Farley expects sales to be evenly balanced between work and personal buyers.

But Ford may have a hard time selling it to people who build houses, maintain lawns or plow snow.

“It sounds good, but it’s not good for the type of business I’m in,” said Jimmie Williams, owner of a landscaping firm on Chicago’s South Side. He doesn’t think the battery will have enough range to last the 12-14-hour days his crews sometimes work maintaining about 700 properties.

He’ll stick with his three gas-powered pickups, in part because he plows snow in the winter, when cold weather can limit an EV’s range.

Others aren’t ready now but might be convinced to switch in the future.

Goodbye gas: Volvo to make only electric vehicles by 2030

“Maybe when I’m retired,” quipped Steven Realy, a foreman for a subcontractor at a housing development in Pittsfield Township, Michigan.

Realy, 28, whose company uses diesel trucks to carry equipment and building materials, doesn’t think an electric truck will do the job now but maybe in the future.

“When electric takes off more than what it is right now," he said, "I could see myself owning one, definitely.”

Yet it may be difficult to persuade some people to give up the big gas engines they’re used to.

“I like my V-8,” Anthony Lane, a 26-year-old plumber in the same development, said from the driver’s seat of his gleaming Chevrolet Silverado.

Aside from a charging port and a Lightning decal, Ford’s new truck resembles a standard F-150. That was intentional. Ford wants the Lightning to be perceived as just as capable as gasoline versions, if not more so.

Even the base version of the electric F-150, with two rows of seats and a 230-mile estimated range per battery charge, can haul up to a ton in its bed. A high-end Lightning equipped with a longer-range battery can tow an estimated 10,000 pounds, matching many gas-powered trucks, though falling about 3,000 pounds shy of Ford’s V-8 engines.

Perhaps the most surprising thing about the truck is its price, which Ford said is about equal to a comparably equipped gasoline F-150. With a federal tax credit of up to $7,500 still available on Ford electric vehicles, the base price falls to around $32,500. That’s below the lowest-priced gas F-150 with a crew cab, which starts at roughly $37,000.

The Lightning has a front trunk with plugs for power tools and lights at job or camp sites. And if the electricity goes, out, it can run your house for up to three days, which Farley expects to be a big selling point.

Competition for the Lightning is looming. General Motors says it’s working on an electric Silverado. Stellantis is developing an electric Ram. Tesla’s angular Cybertruck is due out this year. And startups Bollinger Motors, Nikola, Rivian and Lordstown Motors have trucks in the works.

All will face an inevitable obstacle in seeking buyers: brand loyalty. Pickup drivers often stick with one company for life. Sometimes, they choose a brand because it’s been in the family for years, if not generations.

“I’m not a Ford guy,” said Lane, the plumber. “I drive Chevys my whole life.”

Once General Motors comes out with an electric Silverado, though, Lane might consider a change.

“I’ll probably stick with the gas," he said. "But if they ever fully switch over to electric, I’ll probably get the Chevy one.”