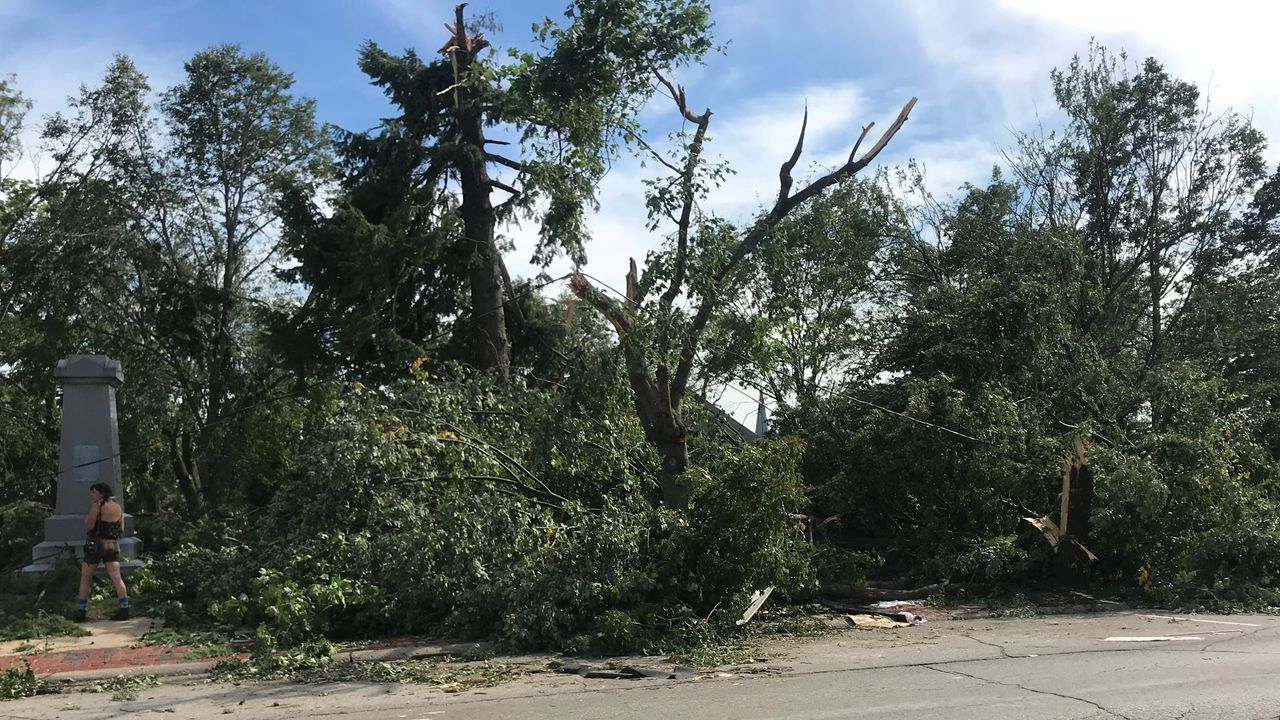 The Aug. 10, 2020 storm knocked down trees all over Midwest cities. One Iowa resident said the most striking thing about the storm damage was the amount of trees lost in the storm. Credit: Amilee Laube from Marion, Iowa

Two years ago Wednesday, a derecho ripped through the Midwest, costing lives, billions of dollars in damage and the loss of millions of acres of staple crops, the National Centers for Environment Information (NCEI) reports.

Four people died during the event, which moved across 700 miles from Iowa to Ohio on Aug. 10. Multiple wind reports of more than 100 mph were received, according to the NCEI, a department of the National Oceanic and Atmospheric Administration, or NOAA.

The National Weather Service (NWS) says a derecho, pronounced “deh-Ray-cho,” is a rare type of severe thunderstorm that is widespread, long-lived and causes “straight-line wind damage.”

The states most affected during the 2020 event were Illinois, Indiana, Iowa, Minnesota and Ohio.

The storm cost the Midwest around $12.5 billion in damage, according to a NCEI table that shows Consumer Price Index-adjusted costs of billion-dollar disaster events in the U.S.

According to the NCEI, some of the worst damage occurred in Linn County, Iowa, where Iowa’s second-largest city, Cedar Rapids, is located.

“We originally thought this was a typical thunderstorm,” reflected Amilee Laube, who lives just outside Cedar Rapids. “We went to the basement due to the sirens going off and then quickly realized this was serious as we heard the howling wind that was stronger than anything we had heard before. Soon we saw debris flying through the air and it seemed to last forever.”

Melanie Van Weelden, a Cedar Rapids resident whose home was declared uninhabitable by their insurance company, said her greatest concern when the thick of the storm passed was finding her daughter.

“Our house backs up to a nature preserve and she abandoned her car on the other side of the woods. We hiked about a mile through the fallen trees in the woods to meet her and bring her home while the rain was still falling,” Van Weelden said.

Van Weelden said her family left their basement when they felt it was safe to find the neighbor’s 65-foot tree inside their home. While the Van Weelden’s were able to move into a rental home Melanie called “too small” for her family, not all were so lucky.

“Even after two years it’s not unusual to drive around town and see homes with blue tarps on the roofs because families just don’t have the financial resources or connections to facilitate repair,” Van Weelden says.

The Van Weelden family finally moved back into their home – which is still under construction – in July 2022. Neighboring homes are just beginning construction in summer 2022, Van Weelden says.

The NCEI says millions of people across the Midwest lost power during storms, with thousands losing power for more than a week.

“Several days after the event, more than 100,000 people were still without power in the Cedar Rapids area, and tens of thousands were without power for more than a week, as many local and regional utility crews had been dispatched to the east coast for Hurricane Isaias recovery. An estimated 90% of structures in Cedar Rapids sustained some sort of damage from the storm, and more than 1,000 homes were destroyed,” NCEI reported.

Laube says her home was without power for about 10 days, while unlucky neighbors waited two or three weeks before their power was restored. NOAA reports some of the local and regional utility crews had been sent to the East Coast to help with recovery following the landfall of Hurricane Isaias.

While refrigerators and lights are back on, some communities are still feeling the effects, as well as industries across the board that rely on crops like corn and soybeans that were flattened in the storm.

“Many community buildings were impacted, for example Marion High School experienced a roof collapse,” Van Weelden recalled. “Our daughter Ella was getting ready for her senior season of volleyball in 2020 and had to play home games in the middle school gym. The football team had to play their games in a neighboring school’s stadium due to damage at the field. I am a minister and my church has just recently completed the $1.2 million reconstruction of our building after the copper cladding blew off the steeple during the storm causing significant water damage.”

View damage pictures from Iowa in the gallery below.

Editor’s Note: The two people quoted in this article are a family member and family friend of a 5 EYEWITNESS NEWS employee, who was born in Cedar Rapids, Iowa.