Nurse organizes humanitarian supplies to be sent to Ukraine

Marco DuBois is preparing for a long journey.

“Watching what was going on in Ukraine, just it really bothered me,” he says. “To see that kind of suffering.”

DuBois is collecting free medical supplies ahead of a trip to Lviv, Ukraine.

“He is just dedicated to helping in any way he can,” declares Joel Anderson, Matter’s executive vice president. “Everything from tourniquets to bandages, to specialized wound care.” 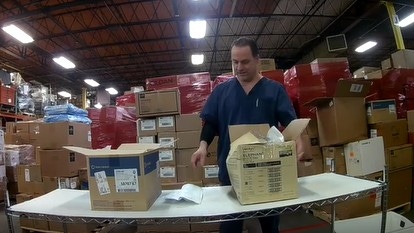 A nurse gathers humanitarian aid to be sent to Ukraine.

DuBois — married with two children, works in the emergency department at Allina Health’s Mercy Hospital — the Unity Campus in Fridley.

He says he’s taking several suitcases of IV tubes, bandages, sutures and other medical supplies, to the war zone.

“I do really feel that this is going to save some lives with the medical supplies,” DuBois explains. “As far as what I do over there, hopefully, I’ll get to use some of my nursing skills and take care of some people.”

Now based in Lviv, Lindquist says he’s been raising money to help supplies for refugees, for food but also personal items like shoes, rubber gloves, plastic cups, and soap.

“Look what’s happening over there,” Lindquist told 5 EYEWITNESS NEWS, days before departing to Poland. “You watch the news, you see the tragedy.”

DuBois says he saw that interview, and was inspired to help with medical supplies and expertise.

“He is there. We’ll get those to the people we can get them to on the Ukrainian side,” he says. “And then I also plan to work — doing some medical aid, nursing care wherever I can. I’m sure it’s needed.”

Anderson is aiding DuBois with his mission.

Inside the nonprofit’s warehouse are thousands of pallets and boxes of medical supplies.

Anderson says Matter acts as a go-between — repurposing donated medical supplies from fifty hospitals or hospital chains from across the country — and giving them in turn, to humanitarian aid workers.

He notes the group repurposed 3.1-million pounds of medical materials in 2021.

“When there’s disasters that happen in the world, we try to respond,” Anderson says. “We are able to take those, help those people, fill up their suitcases and duffel bags and head over in planes and do the necessary skills to save people.”

He adds that in the last two months, Matter has supplied 75,000 pounds in medical supplies for humanitarian aid in Ukraine.

Some of those supplies were sent to Atlanta, where the U.S. Defense Department’s ‘Denton Program’ airlifts them to Europe.

Anderson says for him, helping DuBois — and the humanitarian effort is personal.

He notes he’s visited and worked in Ukraine several times over the years, before the war broke out.

“If we can support those heroes like Marco, going overseas and putting hands on people and helping them in their real difficult stage, we are so honored to do that,” Anderson says.

DuBois says his family is concerned for his safety — he’s planning to fly to Poland in about a week, then he’ll go by truck to Lviv.

He expects to stay in Ukraine for about two weeks.

DuBois says he’s carefully explained his reasons for helping in the humanitarian effort to his family.

“If it was us, and suddenly we were bombed out of our home and out in the cold with only what’s on our backs, I would hope somebody would come and and try to help us,” he says quietly. “So hopefully, I come back feeling that I really did something — and I’m really motivated to do that.” You can find out more information about Matter here.