People waited patiently in their vehicles as long lines snaked around the parking lot at the Ukrainian American Community Center in Minneapolis. More than 650 people were expected to pick up a fish fry, with pierogi, on Friday.

The Lenten tradition has taken on new meaning since Russia’s invasion of Ukraine.

“We love pierogis and fish fries and I saw on Facebook they were doing both on Fridays,” said Vanessa Hauge, who waited in line. “Everyone is upset by the situation going on there […] I think this is one way Minneapolis can support what’s going on there.”

Ukrainian American Community Center members, including Bohdan Kuczwarskyj, waved drivers through the queue. He told 5 EYEWITNESS NEWS more than 500 people have turned out each of the past few Fridays. Each car brings the opportunity for a conversation.

“It goes from ‘I want to go over there and help fight’ to ‘what can I do?’” he said. “We’re really happy about all of the support from the Ukrainian Center and be able to talk about what’s going on in Ukraine and support that effort too.” 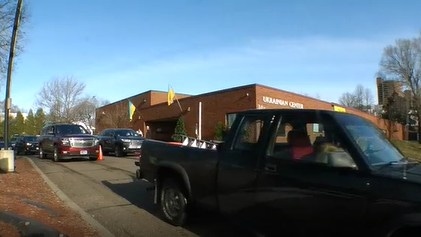 Kuczwarskyj has been a member of the community center since he was a small child. He said, “I came over with my parents in 1958.”

He still has 22 cousins in Ukraine. From donations to reaching out to refugee services, he told us he’s doing everything he can to help his family abroad.

“I call them every couple days,” he said. “The refugee status is not set up so I can’t pull them over here so that’s difficult.”

Community Center President Paul Jablonsky hasn’t been able to get ahold of his distant cousins in Ukraine.

“A lot of Ukrainian-American immigrants that have come here have been kind of quiet in the cities living the American life, enjoying the freedoms that we have here, have finally understood how important that freedom is,” said Jablonsky.  “Unfortunately, their parents are in Ukraine, their brothers and sisters, their cousins. At the Ukrainian Center, we have a huge map and on that map are pins of where a lot of our members still have family members.”

He explained the heartbreak and hardship of the loss and destruction in Ukraine is felt deeply in the Twin Cities community. The images remind him of past wars that forced Ukrainians to flee. His father left the country during World War II when he was only 14 years old.

“That experience was just traumatic for him and a lot of other people,” said Jablonsky. “Now we’re facing the same dilemma, which is the Ukrainian question, what does the world do with Ukraine? It’s a question that has been lingering since World War I and it’s never been answered and here we are two generations later and we’re facing the same issues that our parents and our grandparents faced generations ago.”

He estimates the Ukrainian American Community Center has raised $80-$90,000 to help the humanitarian efforts. Jablonsky explained their main focus areas are refugee help, medical supplies for wounded civilians and soldiers and personal protective gear for EMT’s and first responders in Ukraine.

“[We are] passing [the funds] on to other non-profits that have actionable people on the ground and get medical supplies very quickly to them,” he said. “Those non-profits are fully vetted, they’re better equipped than us to do that.”

He said other businesses, including Dangerous Man Brewing, have hosted events to support the Center’s humanitarian efforts. Nonprofits have also dropped off medical supplies to ship oversees. Several local schools, including Washburn High School, are raising money as well.

“I think it’s fantastic how the American public has come to the aid of Ukraine in small ways to big ways,” said Jablonsky.

The Ukrainian American Community Center suggests reaching out to one of these organizations to help: