The Centers for Disease Control continues to investigate cases of severe liver illness of unknown origin among children across the country. Possible cases have been reported in at least half a dozen states, now including Minnesota.

On Friday, the Minnesota Department of Health told 5 EYEWITNESS NEWS it is investigating several severe hepatitis cases among children, which Minnesota hospitals recently reported to the agency.

M Health Fairview confirmed it reported two cases to MDH, which involve an infant and a two-year-old.

One of the patients was treated several months ago, which included receiving a liver transplant.

“Why this kid had such severe acute hepatitis is unknown,” said Dr. Heli Bhatt, M Health Fairview Pediatric Gastroenterologist and Transplant Hepatologist. “It was kind of fitting enough for me to let Minnesota Department of Health know and they are going to investigate the case further.” 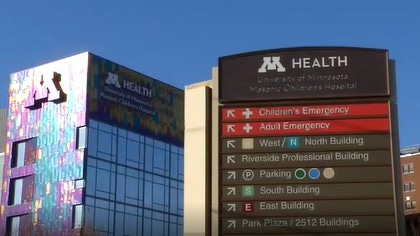 The other patient is currently in the hospital and is on the transplant list, according to Dr. Bhatt.

“I pray for that kid to turn around, which they might, but some of those indicators do say that it is severe and so we have evaluated this patient for transplant,” she said.

Dr. Bhatt explained additional lab testing is pending and she expects they’ll have more information in the coming days.

“Right now, a lot is unknown,” she said. “We are blaming all of this on adenovirus, and yes a lot of cases do have this adenovirus, but whether it is just that kid had adenovirus and had this, is it coincidental or proven? We don’t know.”

The CDC sent out an alert to physicians last week regarding severe hepatitis cases. The agency encouraged doctors to test children with severe liver illness for adenovirus.

The recommendation was issued after a cluster of cases was reported in Alabama, dating back to October. The CDC has now confirmed in each of those nine cases, the child had both hepatitis and tested positive for adenovirus.

“I think it’s really the clustering of cases and the severity of cases that has us on high alert,” said Dr. Anu Kalaskar, the medical director of infectious disease at Children’s Minnesota. “In the cases in Alabama, all of the cases were associated with an adenovirus infection at some point.”

She added, “We know it’s a type of adenovirus that causes really a mild gastroenteritis, which is usually symptoms of vomiting and diarrhea in otherwise healthy children. But in the cases in Alabama, those children that were infected were all known to be previously healthy or at least no known underlying medical conditions and progressed to a very severe form of hepatitis that we wouldn’t typically see in an otherwise healthy child.”

A growing number of similar cases are now being reported across the country. This week, the Wisconsin Department of Health Services issued an alert that it’s investigating at least four similar cases, including one involving a transplant and another patient who died.

“The reason the alerts are being put out, the Health Alert Network in Wisconsin and in Minnesota and across the country, is there’s a little bit of a delay between the vomiting diarrhea and hepatitis that’s developing,” said Dr. Stacene Maroushek, a Hennepin Healthcare pediatric infectious disease specialist. “They want to make sure that everybody has this on their radar and we’re really looking at cases of hepatitis not as something else but possibly related to the adenovirus, as well as looking at other causes.”

Hennepin Healthcare has not identified any of these cases within its network but Dr. Maroushek told 5 EYEWITNESS NEWS they are looking at patient records.

“We’re working with the Minnesota Department of Health to look a little bit closely at some of our unusual stomach flu virus that we’ve had come through,” she said. “Right now I have a heightened sort of lookout for it.”

“Maybe that means thinking about checking liver enzymes a little more often in some kids,” said Dr. Maroushek. “Or, counseling parents if their child has vomiting and diarrheal illness to make sure that if they’re getting yellow or seemingly like they’re changing skin color, like getting jaundice, that they seek medical care sooner rather than later.”

She advises parents and children to wash their hands after using the bathroom or changing a diaper, or before eating or touching their face to avoid speeding adenovirus.

“The biggest message I want to say is there is a lot that is unknown yet,” said Dr. Bhatt, with M Health Fairview. “We are not in a panic stage and the best you can do for your little ones is maintain good hand hygiene […] and if there are symptoms reach out.”