Inside Poland, just 200 yards from the Ukrainian border, is a safe zone.

A way station for refugees seeking safety and shelter from the Russian invasion.

“So this is ground zero, staging ground for hundreds of thousands of people,” declares Igor Radonjic, an advisor with Alight, a global humanitarian organization based in Minneapolis. “Huge, huge lines of people trying to get in, and they are getting in, but it’s the sheer scale, it takes time.”

Radonjic— who’s worked with Alight in the Balkans, Haiti, Darfur, and Ethiopia— says this is the largest exodus of refugees he’s ever seen.

The crossing, in the town of Medyka, is busy around the clock, he says.

Radonjic is one of an eight-member team that’s distributed more than 2000 blankets, hats, socks and gloves here. 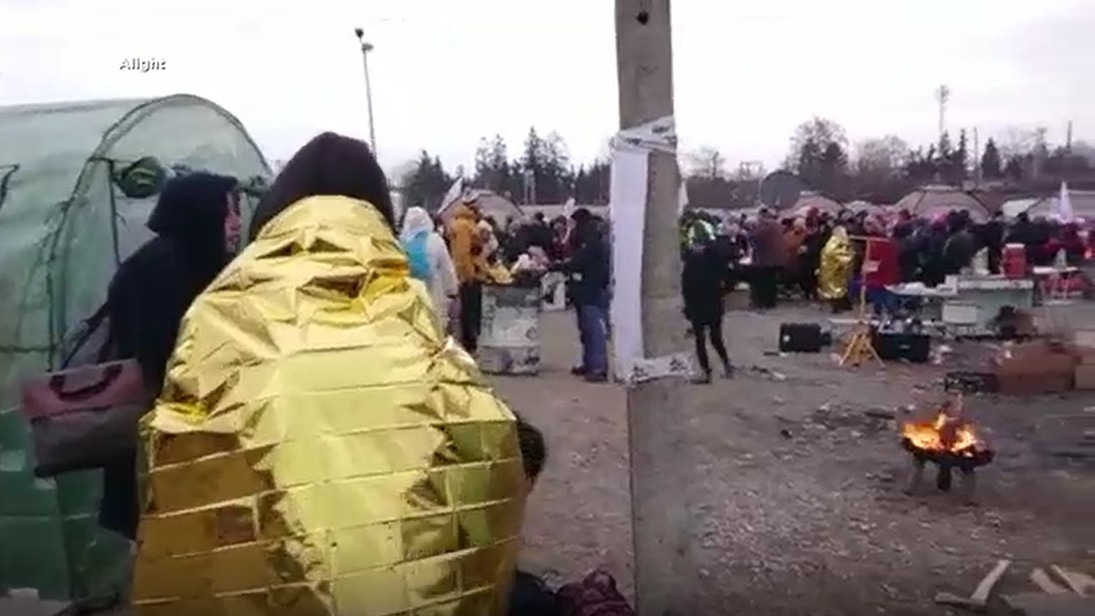 “Because people can wait, sometimes wait for a few hours before they get on the bus to more further,” Radonjic explains. “It’s very cold and we’re trying to get warm clothes, blankets. Other people are providing food.”

The team has set up a warming tent and an information center.

“For example, people are looking for sim cards once they exit their country, Ukraine,” Radonjic notes. “They like to keep in contact with their loved ones or aid organizations or friends in Ukraine.”

The 51-year old veteran aid worker, original from Montenegro, in the Balkans— says many are being bused to a nearby shopping mall as a temporary shelter.

“What I hear from the refugees themselves, they didn’t expect this— and the scale of movement of the people toward the Polish border is staggering,” Radonjic exclaims. “(One man) told me ‘I’m here with my family, we waited in a line on the Ukrainian side, the line was like twenty hours to cross in the cold.’”

The United Nations relief agency says more than 2.5-million refugees have already fled from Ukraine— with the majority, fleeing to Poland.

Many have lost everything.

All this— in the aftermath of Russian airstrikes in the industrial city of Dnipro, where at least one is reported dead.

“As tragic as the humanitarian situation is, I don’t see the Ukrainians backing down,” says Kathleen Collins, a political science professor at the University of Minnesota.

She says there is defiance and resistance against the Russian invasion— but also, much suffering.

“It’s the civilian population that’s going to suffer the most and the Russian government doesn’t care,” Collins says. “That’s the bottom line, they simply don’t care.”

In the port of Mariupol, now cut off by Russian forces, there are food and water shortages, with people melting snowballs for water, and using generators to charge phones.

The shelling of a hospital is a terrible sign of more to come, Collins says.

“It’s about terrorizing the population, the civilian population to force the government into submitting to Putin’s will,” she adds. “Now they are shelling anything where they can, to maximize the number of casualties and maximize the terror.”

Collins says she believes if the Ukrainian resistance continues, Russia will ramp up those attacks.

We asked how long she thinks this could go on.

“It’s likely that over the course of months to several years,” Collins says. “They will take control of Ukraine militarily, but it’s extremely possible we will see a long term multi-year, even decade-long campaign of insurgency on the part of the Ukrainian people for their land.”

Meantime, along the border, Radonjic and his team are bracing for more refugees seeking safety.

“Just a huge movement of humanity we’re seeing,” he says. “It’s a safe place to be, so if that’s any comfort, when it comes to what’s happening on the other side.”

You can find more information about Alight here.