Minneapolis man keeps in touch with loved ones in Ukraine, tells them they are not alone

About once a week, Stephen Vitvitsky makes a very special long-distance zoom call from his home in south Minneapolis.

He uses the video conferencing technology to see and speak with family members in Chernivtsi, Ukraine.

“It’s reassuring to see their faces, even though it’s on video,” Vitvitsky says. “It’s one of those little things we can do, is make ourselves available for these conversations, and just be human.”

On Saturday, he let 5 EYEWITNESS NEWS sit in on a Zoom call with his second cousin, Mykhailo Pavliuk, a city council member and a father of three in Chernivtsi, a city about 5000 miles from Minneapolis, on the Romanian border.

The conversation began with family. 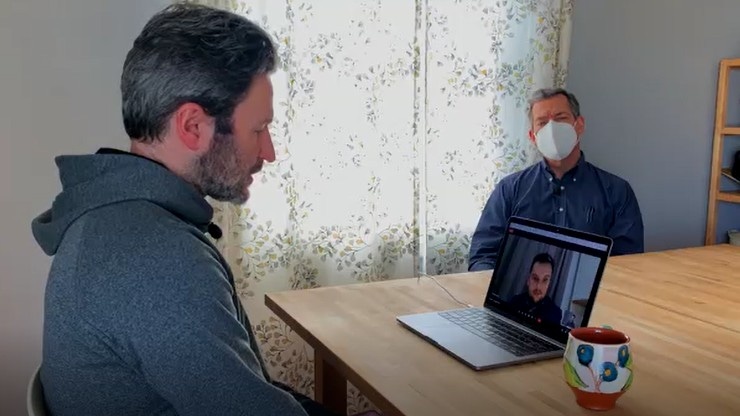 “How are they holding up?” Vitvitsky asked.

“Here we don’t much suffer from bombs or from rockets, but still have air alarms, usually at night,” Pavliuk answered. “(My children) understand, we talk with them, we communicate. There are many kids in the basement, they are even playing, taking some of their games and playing football.”

“You can see the anxiety that they have, or the stress that they have,” Vitvitsky told us afterward. “I know it’s difficult to sleep, especially if you have to run to the bomb shelter when the air raid sirens go off, or drag your kids down into the basement.”

Chernivtsi is just twenty-two miles from the border.

Vitvitsky asked him if he felt, at least for now — that his family is safe.

“Nobody feels safe in Ukraine the last three weeks,” Pavliuk declared. “That’s absolutely true. If we don’t see rockets or hear bombs, that doesn’t mean we are in the safe, because we have different people coming here.”

The council member says police in his community have arrested Russians — dressed in civilian clothes— suspected of collecting information about the community.

“I’m not surprised to hear him talk about spies or miscreants, Russian miscreants around the city of Chernivtsi or really any other city in eastern Ukraine, southern Ukraine, or western Ukraine,” Vitvitsky says.

Pavliuk says he hopes there will be news about additional military aid or sanctions against Russia, when President Joe Biden travels to a NATO summit next week in Brussels, Belgium.

He says people in cities further east, like Kyiv or Mariupol, are suffering the most — and that Russian forces are targeting the civilian population.

“We suffer much as civilians in this war, because we have more than 110 kids already found dead in Ukraine,” Pavliuk says.

Meanwhile, he says and others are trying to help with humanitarian aid: items brought in from neighboring countries and shipped east.

He also says he hopes a no-fly zone will be backed by the NATO allies — a move President Biden has said will lead to World War III.

“We are fighting, not just for ourselves. We are fighting for democracy, for the rule of law — for the whole united democratic world,” Pavliak says. “And to give us more weapons, more financial support. And the idea to close the sky should unite all members of NATO. This is a war of ideas, this is a war of principles.”

Vitvitsky says he has hopes, too.

That these conversations, half a world apart — will make a difference.

“I think, I hope it offers a little bit of connection with the outside world,” Vitvitsky says. “A little bit of sense of normalcy in what must be and what is — a bizarre and terrifying experience for anybody in Ukraine.”