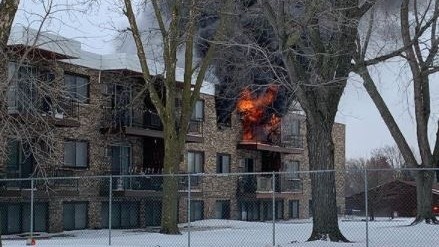 A woman has been charged with arson after a Thursday apartment fire in St. Paul that left dozens displaced, court records show.

Daniesha Marie Savage-McComb, a 28-year-old from St. Paul, is charged with two counts of first-degree arson.

At 12:30 p.m. Thursday, St. Paul police responded to the 100 block of Larpenteur Avenue West on a domestic call. Upon arriving, officers found the 911 caller’s apartment ablaze, according to a criminal complaint. The man told police that Savage-McComb, his spouse, had shoved him during an argument and that she’d set the apartment on fire.

The St. Paul Fire Department said that one person was rescued from their third-floor balcony by fire crews and one person received medical care at the scene. No one else was injured. However, the fire extended beyond the initial unit and caused significant damage, and, upon inspection, 42 units were condemned.

Officers arrested Savage-McComb. She told officers that she’d been struggling with her mental health and medication management; she also said she did push her spouse.

Savage-McComb told police that she’d lit a disposable face mask on fire and placed it on a bed, subsequently splashing it with alcohol, the complaint states. The fire then spread. She said she tried to put it out but was unsuccessful.

The Red Cross helped coordinate shelter for around 40 residents; animal control helped care for pets from the apartment building.

Savage-McComb made her first appearance in court Friday and has a second hearing in April.