‘There’s something special about them. I love ducks.’ Meet a local artist whose work is in the back pocket of every duck hunter in the country.

You could call Jim Hautman the duck whisperer.

Hautman uses paint, brush, and canvas in his Chaska studio to pursue that beauty.

It’s a quest that began early, influenced by his parents.

“I just remember growing up, looking at all the paintings my mom and dad had done,” Hautman recalled. “All the different species and different colors they had.” 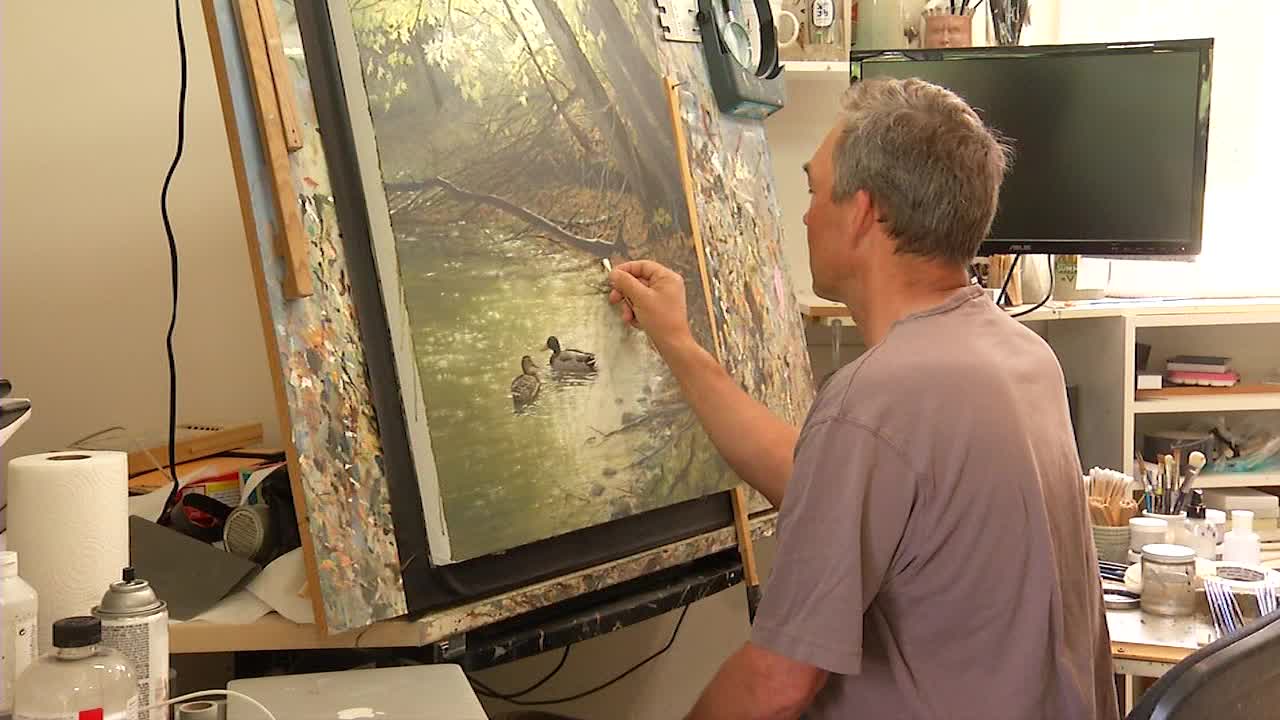 You probably know at least some of his pieces if you’re a duck hunter.

That’s because this year — and five times before — Hautman’s waterfowl portraits have adorned duck stamps, the federal duck hunting permits issued by the U.S. Fish and Wildlife Service.

“Attention to detail,” noted Chris Knutson, owner of Art Barbarians Wildlife Gallery in Rogers. “He’s been an artist all his life, and it shows in his work.”

The stamp artwork is chosen through a nationwide contest.

Hautman has won a record six times. The first time was in 1989 when he was 25 years old.

That win came with a trip to the White House and a meeting with then-President George H.W. Bush.

“It’s been great. My dream was to win it one time starting out,” Hautman said. “My dad had collected duck stamps from the time before I was born. He started with the first stamp in 1934.”

There’s no cash prize for winners.

But Knutson, who’s sold Hautman’s work for twenty-seven years, says an original painting can sell for $3000 and up.

“When Jim wins federal duck stamps like this, every newspaper in the country does an article on him,” the gallery owner declares.

It turns out this duck artistry is a family affair.

“All three of the brothers are avid duck hunters,” Knutson said. “They push each other, but they also help each other.”

“There’s definitely competition between us, but it’s a fun competition, and it’s constructive,” Hautman explained. “We still critique each other. So you can pick on the other guy’s painting and tell him what’s wrong, and it helps.”

His winning entry this year is titled simply ‘Redheads.’

Since he won this year, Hautman can’t enter the contest for three more years.

Meanwhile, on any given day, you’ll find Hautman in his studio, contentedly at work.

And at 58, he shows no signs of slowing down.

“I guess the whole idea was to try to become an artist and be able to paintwork for myself,” Hautman said quietly. “The fact that I’m still doing it 35 years later, I guess it makes me feel pretty good, pretty lucky.”