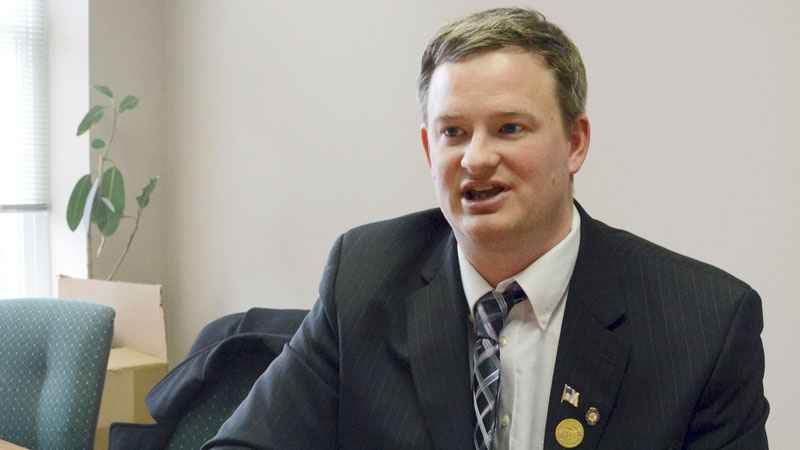 In this Feb. 23, 2014, file photo South Dakota Attorney General Ravnsborg speaks in Sioux Falls, S.D. The South Dakota House on Wednesday, March 3, 2021, left the impeachment of the state's attorney general in doubt as lawmakers moved to delay evaluating whether he should be impeached until the conclusion of the criminal case against him for hitting and killing a man with his car.[AP/Dirk Lammers, File]

South Dakota Attorney General Jason Ravnsborg pleaded not guilty in an initial court hearing Friday for three misdemeanor charges he is facing for striking and killing a man with his car last summer.

The Republican attorney general did not appear at the courthouse in Pierre, South Dakota, but his lawyer Tim Rensch made the plea on his behalf. The prosecutor noted that it is typical for defendants to plead not guilty at this point in the case before defense lawyers have a chance to look at the evidence.

Besides the misdemeanor charges, the state’s top law enforcement officer is facing calls for his resignation from Republican Gov. Kristi Noem and law enforcement groups.

But Ravnsborg has said he will not step down and —for now— maintains he is not guilty of breaking the law on the night of Sept. 12 when he struck a man walking on the shoulder of a rural highway. However, he could face up to 30 days in jail and up to a $500 fine on each misdemeanor charge: careless driving, driving out of his lane and operating a motor vehicle while on his phone. Though prosecutors said he was not using his phone at the time of the crash, he had been using it while driving about one minute before the crash occurred.

Rensch requested 60 days to look over the evidence in the case, to which the judge and prosecutors agreed.

Ravnsborg, who was elected to his first term in 2018, initially told authorities he thought he had struck a deer or another large animal as he drove home to Pierre from a Republican fundraiser. He said he had searched the unlit area with a cellphone flashlight and didn’t realize he had killed a man —55-year-old Joseph Boever— until the next day when he returned to the crash scene on U.S. 14 near Highmore in South Dakota.

After an investigation that stretched over five months, prosecutors said they still had questions about the crash but were unable to file more serious criminal charges such as vehicular homicide or manslaughter, which could have meant years of prison time.

Boever’s family members, including his widow Jenny Boever and his mother, traveled to Pierre for the hearing, which lasted less than 10 minutes. But for several minutes on Friday, the normally sleepy courthouse was crowded with lawyers, reporters and Boever’s family members. His widow is planning to file a civil wrongful death lawsuit against Ravnsborg for her late husband’s death.

"Jenny, the widow, just wants to make a presence," said Boever’s cousin, Nick Nemec, who has been outspoken in questioning the attorney general’s account of the crash.

Nemec called Ravnsborg’s decision not to plead guilty at the outset of the case "troubling."

"He was obviously outside of his lane. The skid marks on Highway 14 are still visible," he said. "I think he’s just as guilty as can be."

Emily Sovell, the Hyde County Deputy State’s Attorney who is the lead prosecutor, said "it is not uncommon at all" for defendants to initially plead not guilty before viewing the evidence.

Prosecutors declined to discuss details of the crash further, noting they are under a gag order from Retired Sixth Circuit Judge John Brown.

Brown made that order last month at the attorney general’s request after Noem released videos of investigators questioning Ravnsborg on two separate occasions after the crash. Detectives were incredulous that Ravnsborg did not realize he had struck a man, telling him that Boever’s face had smashed through his windshield and Boever’s glasses had been found in his Ford Taurus after the crash.

House lawmakers had moved to begin impeachment proceedings against the attorney general last month, but took a step back after the judge’s order.

Lawmakers have said they will consider whether Ravnsborg should be impeached after the criminal case concludes.