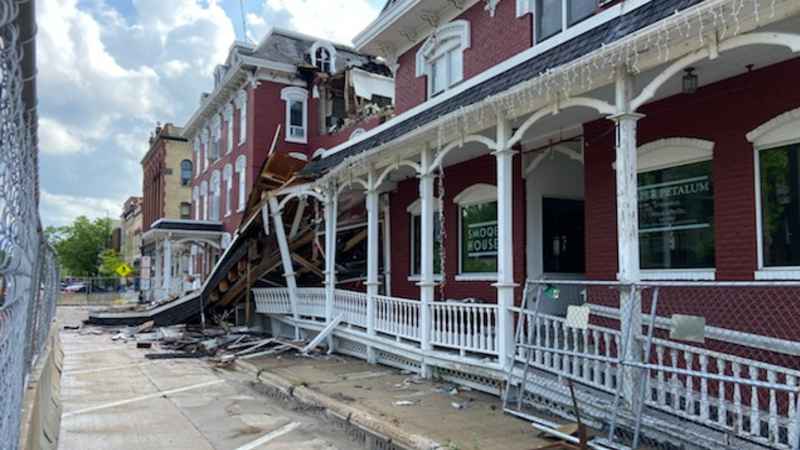 A sizeable section of Archer House River Inn, a historic red-brick hotel in Northfield that suffered a devastating fire in November, collapsed on Friday.

A pile of rubble spilled from the facade and knocked down what used to be part of the front veranda. It’s unclear what the collapse means for the hotel’s future as its owners grow frustrated with an ongoing insurance investigation.

Erected in 1877, the building was put out of commission after a fire originating in the kitchen of Smoqehouse, a restaurant on the first floor, spread to the walls and floors above.

Damage reported after fire at historic Archer House in Northfield

2 weeks after Archer House fire, fate uncertain but many hope for preservation

Sprinklers were activated, and firefighters worked 18 hours straight to put out the blaze; by the time the fire was contained, the building had taken on significant fire and water damage. Shortly afterward, fire officials estimated the section that caught fire was a total loss.

In February, the owners of Archer House said the insurance investigation was nearing its end. They said the results would help them assess the future of the site and decide between with restoring, replacing or redeveloping the building.

But Brett Reese, who owns Archer House, now says it’s taken "way too long to get results" from the insurance investigation and the building has been at a standstill.

The insurance company took over the hotel right after the fire and just relinquished control less than two months ago. That delay left the already-weakened building exposed to the elements and likely contributed to the collapse, Reese said.