This gives a brand new meaning to color commentating.

For the first time ever, the Minnesota Vikings have its own artist to capture the season. KickliySPORTS, a self-trained artist, is growing in popularity across Minnesota after capturing an array of sporting events, practices, and press conferences. Instead of reporting on the players, he’s been painting them.

Within a short amount of time, KickliySPORTS has managed to wow the sports community by capturing key plays by the Minnesota Wild, Twins, Gophers, and other high-profile tournaments like the 3M open.

Kickliy, who prefers to go by this one-name title, says he’s only been exclusively painting sports for about six months; adding he immediately found his calling while sitting down with his brother at a Minnesota Wild game. Kickliy began sketching, capturing, and stroking the paint during the fast-paced game on ice. He hasn’t looked back ever since.

“Each team, each sport causes new problems to be solved and I like that,” Kickliy said with a smile. 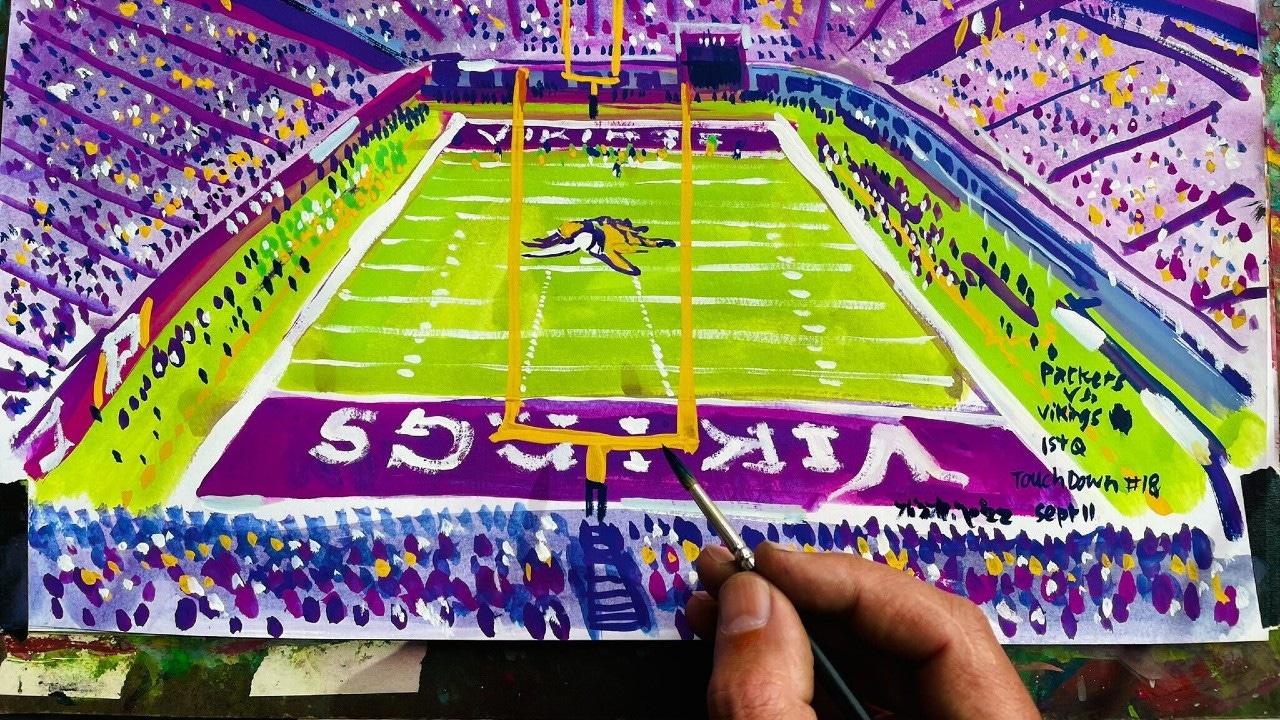 5 EYEWITNESS NEWS met the artist on the Minnesota Gophers’ sideline during their second in-season game against Western Illinois. The Gophers trampled the Leathernecks 62-10.

On the field, Kickliy was silently detailing moments around Huntington Bank Stadium the entire afternoon. From a concession stand painting, which seemed to only take Kickliy about 25 minutes, to an impressive wash of color that perfectly displayed the energetic Spirit Squad cheering on the crowd and the team. Kickliy likes to bounce from place to place, often seen in the Press Box or in the stands, trying to grasp all angles of the game.

We asked the extremely relaxed and confident artist why he didn’t take a photo to remember what inspired him. Kickliy’s response was simple, photos are too easy.

“I only have moments to be able to capture it,” he said, adding he likes the challenge of layering different moments, plays, and scenes together to create a more interactive canvas.

KickliySPORTS explained he never knows what he will capture before he enters the stadium, instead leans on his intuition and when he sees it, he just knows. It can take five minutes or an hour to paint what he’s feeling and when that spark expires, Kickliy knows when the piece of art is done.

But fans admit it takes them a second to realize what this focused, lone, man is doing at the game before the amazement sets in.

“I’m watching a football game and there’s this quiet man sitting on the bench and I’m like what is he doing? I have never seen a guy paint, (at a football game) paint! Look at this! He’s painting the cheerleaders.” Christopher W. Rohe, said after walking by and abruptly turning around to take a closer look at Kickliy’s work.

“The best photo we’ve ever had of them,” one Gophers Spirit Squad coach belted out while laughing and looking over the painter’s shoulder. Another dance coach who also kept peeking at the artwork said “it’s a really cool memory to have for sure,”.

Many people stopped to ask KickliySPORTS how they could purchase the painting, but Kickliy explained the artwork would be licensed at a later date. However, he went on to add these were only “notes” of what he was planning for later. Kickliy said while he wasn’t 100% sure what the end result would be, the painter would be finalizing the pieces and possibly creating a much larger display of the many moments altogether.

From Start to Finish: Capturing the Minnesota Twins

Earlier this year, Kickliy really caught on when the Minnesota native captured every angle of the Minnesota Twins games, including several stunning runs mentioned in national league updates.

The sports painter explained to KSTP-TV he likes to begin each season by starting big and then focusing inward. For example, Kickliy begins his vision outside of the stadium, sketching the crowds, the movement, and the light. Next, he moves inside and only takes out his brush when he sees what sparks his next piece, like a family watching the game intensely or a mascot revving up the fans.

But why sports? Kickliy first gained notice when he began painting scenes at the Great Minnesota Get Together, then shifted straight into his passion for painting play-by-plays.

Kickliy says it doesn’t get any better for a painter, “this has it all,” he said pointing to all the action, movement, colors, light, and endless energy.

Not only does he somehow capture clock-stopping plays in an instant, but the MVP of Minnesota sports (Most Valuable Painter) seems to also enjoy sharing his talents. Often you can catch moments on social media where the artist catches exciting moments of fans, reporters, announcers, or coaches; his muses then hold up the painting of themselves with a gigantic smile.

How Kickliy Sports Became So Talented

While Kickliy says he’s always painted, he wasn’t always this passionate or this gifted.

It was around seven years ago Kickliy vaguely describes a life-altering car crash that left him with tough decisions to make and a brand new perspective on the years he had left to live.

It was a struggle for Kickliy to even pick up a brush, his hand wasn’t able to grasp a brush, but he did it anyway.

His determination led him overseas. Kickliy then packed his bags, moved to Paris, and dove headfirst into training himself among the very best artists around the world; living and dead.

“I only draw what I can see,” on the Gophers sideline, Kickliy easily quoted Claude Monet several times, trying to describe how he sees the field versus how anyone else may be envisioning it. “I only see color,” he said.

KickliySPORTS’ Partnership with the Minnesota Vikings

His unique view of the game may just be why the NFL team chose him to be an official member of the Vikings team, as their number one painter.

It’s Kickliy’s first official partnership with a team, which means he is getting paid to be there. But, the artist explains he can still paint what he wishes and there isn’t a quota on how many pieces of art he has to produce.

Fueled with excitement, KickliySPORTS announced the news on Twitter.

“I am honored to announce that I have signed a contract with NFL’s Minnesota Vikings as the team’s artist!” Kickliy posted, giving the peace sign.

And it couldn’t be a sweeter arrangement for the growing painter.

And with just as much passion as the pros, he kicked off his first NFL game with the team against the Green Bay Packers.

“I train really hard and when it’s game time, I’m ready to go,” Kickliy says when he’s not out in public sketching, drawing, and painting, he’s often in his studio practicing.

A heart for his own version of color-commenting.

In the Viking’s first game of the season, they crushed their rivals, 23-7.

Kickliy’s stats, six paintings, and an entire season with first-class access ahead.