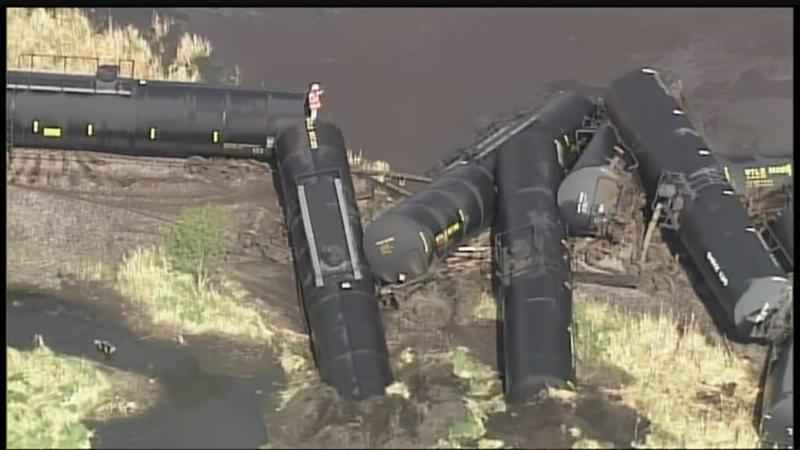 Chopper footage shows a derailed train Saturday, May 15, 2021, in Albert Lea, Minnesota. Police say no one was injured.[KSTP]

On Monday, Albert Lea city officials announced that a trail derailment Saturday resulted in around 40,000 gallons of hydrochloric acid being spilled, according to ABC and Hubbard Broadcasting affiliate, KAAL Rochester.

Saturday at 1:45 p.m., approximately 28 cars on a Union Pacific train derailed near Goose Lake in Albert Lea. Three rail tanker cars filled with hydrochloric acid were breached. One of those tankers was completely emptied and the other two were half emptied.

"The other 20,000 gallons remained in the two cars and has since been transferred to storage tanks at the staging area. Three tankers filled with liquid propane gas were also derailed. None of those tanks were breached. At this time, Union Pacific believes they will have those three cars up-righted and removed from the derailment site and the LP will soon be transferred to semi tankers for transport," city officials said.

"This is approximately 25 feet on each side of the track from the center. Union Pacific is in the process of working with the EPA and the MPCA to mitigate the spill and contaminated soil and wetlands. Currently, the contractor is monitoring air quality at four different sites near the derailment. They, along with the MPCA, are doing soil and water samples multiple times per day."

Crews are working rapidly and safely to restore the land and wetlands. The EPA and MPCA are ensuring that all necessary precautions are being taken and the required steps for a proper clean-up are occurring.

The cause of derailment is still under investigation by the UP railroad.