Nearly 80% of Minn. under abnormally dry or drought conditions 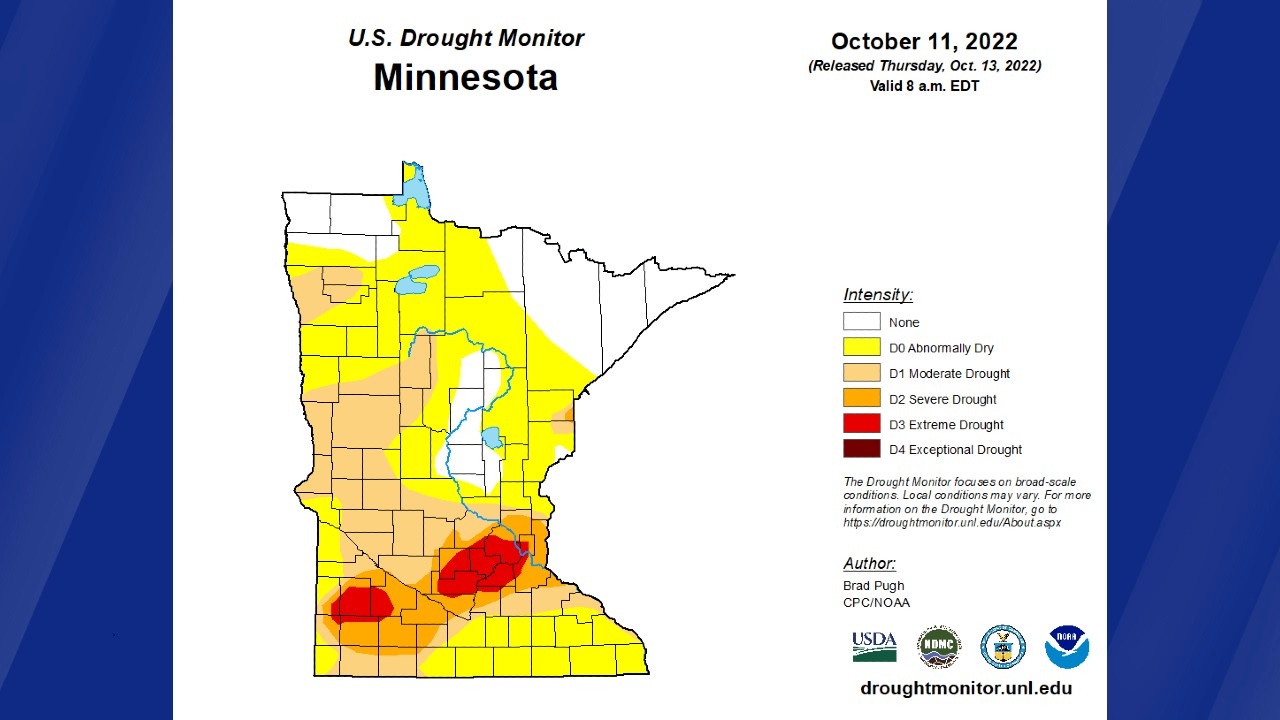 The latest data from the U.S. Drought Monitor shows drought conditions have worsened slightly across Minnesota over the past week.

Last Thursday, the agency reported a little more than 77% of the state had abnormally dry or worse conditions. This week, that percentage has increased to 79.32%.

CLICK HERE to view the latest report for the entire United States.

The data is valid as of 7 a.m. Tuesday. As of Tuesday, only three counties in the entire state didn’t have any kind of dryness reported — Cook and Lake counties along the North Shore, and Kittson County, which borders North Dakota and Canada. All other counties in the state are reporting a level of dry conditions in at least some portion of the county.

On the other end of the spectrum, the percentage of land seeing extreme drought since last week increased from 3.71% to 4.2%. That area is a pocket of land in southwest Minnesota, as well as the western half of the Twin Cities metro and into McLeod and Sibley counties.

The Minnesota Department of Natural Resources noted the past two weeks are the first time any part of the state has been in an extreme drought this year. The agency also noted that droughts can last multiple years — 2021 had the state’s most severe drought since at least 1988 — and urged Minnesotans to be mindful of water conservation.

“Precipitation deficits in fall and leading through the winter can often dictate drought conditions leading into the spring,” said Dan Hawblitzel, meteorologist-in-charge with NOAA/National Weather Service in Chanhassen. “That was the case for the 2021 drought and it is possible these deficits in late 2022 will persist into 2023.”

Wisconsin is seeing similar increases in dryness; however, no parts of the state are in extreme drought conditions. The percentage of land in severe drought in Wisconsin increased to 3.95%.

The latest seven-day forecast from 5 EYEWITNESS NEWS continues to show dry conditions in the Twin Cities metro area, with some snowflakes expected to fall Friday morning.