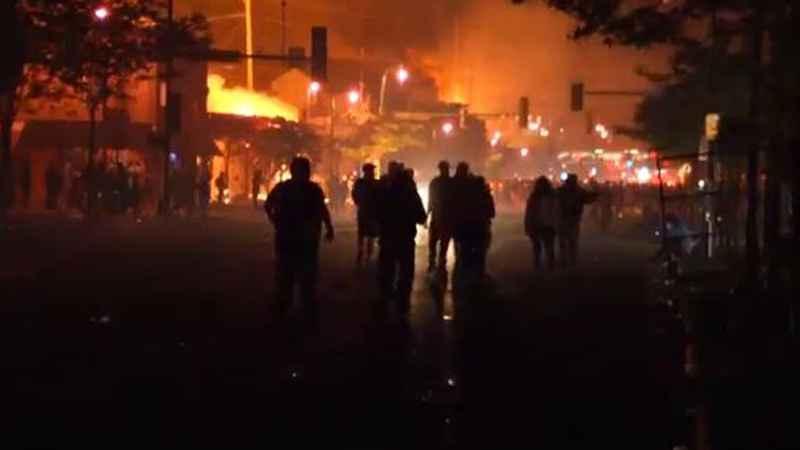 Fires burn during unrest in Minneapolis following the death of George Floyd.[KSTP]

An Illinois man who traveled to Minneapolis to participate in the riots following the death of George Floyd pleaded guilty to arson, according to the Minnesota U.S. Attorney’s Office.

According to Rupert’s guilty plea and documents filed in court, on May 28, he posted messages on Facebook announcing his intent to travel to Minnesota, including one that stated, “I’m going to Minneapolis tomorrow who coming only goons I’m renting hotel rooms.”

On May 29, Rupert recorded a Facebook Live video that shows him in Minneapolis entering a boarded-up Sprint store on Nicollet Avenue. The video shows him surveying the store before going into a back room. Rupert and others then knocked several boxes on the ground. Rupert sprayed them with lighter fluid, and a juvenile — who allegedly acted at Rupert’s direction — lit them on fire.

The store was damaged as a result of the fire.

Initially, Rupert was charged with civil disorder, carrying on a riot and possession of an unregistered destructive device. According to a criminal complaint, he said on a video posted to Facebook that "I’ve got some bombs." He was later arrested in Chicago on suspicion of violating curfew, at which point officers searched his vehicle and found "destructive devices."