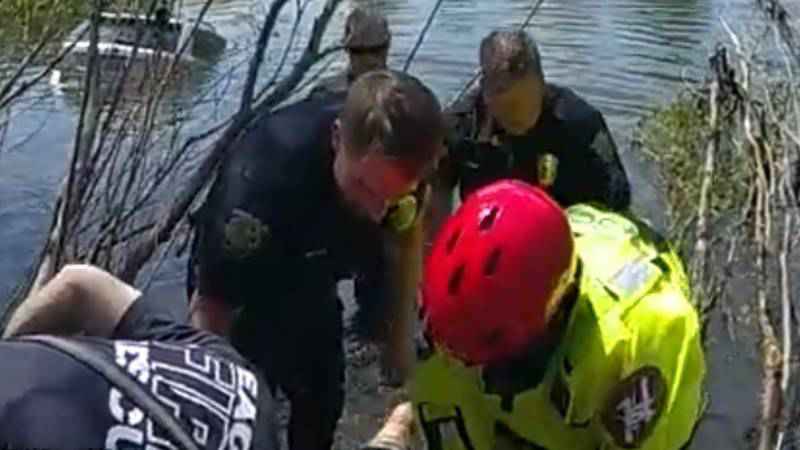 A man, who suffered a medical emergency and crashed into an Eagan pond, was rescued by the Eagan Police Department and a good Samaritan.

According to police, the incident happened at 1:11 p.m. Monday. Officers responded to a report of a vehicle that had driven off the road near Byerly’s, down a steep hill and then rested in a water pond. Police learned that a man had suffered a medical emergency and narrowly missed colliding with another vehicle before leaving the roadway.

When officers arrived on scene, several bystanders were flagging them down, pointing toward the pond below the trees. A good Samaritan who witnessed the incident was already in the water, checking to see if the car was still occupied as officers were arriving. Officers then immediately entered the water and attempted to remove the driver. However, they found all the doors locked, windows rolled up and an unresponsive driver still with his seatbelt on.

While the SUV was floating, pointing nose down and slowly filling with water up to the driver’s knees, rescuers in the water were able to grab the floating car and push it closer to shore, providing them better footing to extricate the driver.

Police said while doing this, the vehicle continued to fill with water and was now up to the driver’s stomach. Acting quickly, so the driver wouldn’t be fully submerged in the water, officers made the decision to break the windows and open the doors from the inside. This allowed them to remove the seatbelt and pull the driver from the soon-to-be submerged vehicle.

Officers and firefighters carried the man up the hill and began providing medical care. The man was transported to a local hospital in stable condition. One officer was treated for minor cuts he sustained while breaking through the windows.

The police department provides a special thanks to the good Samaritan, who happens to also be a city employee. They also commend the officers and the firefighter who jumped into the water without hesitation.