Crews work to determine cause of St. Paul church fire

A congregation in St. Paul is trying to regroup after their church was heavily damaged in a fire Tuesday night.

“We need faith, we need prayers from everyone, it’s just a shock to us, just can’t believe it happened to us,” Greg Demaray, a first elder for the church, said.

“All of a sudden this happened, it’s devastating,” Libny Dubreuze, a member and former pastor at the church, added.

Fire crews were called to the church shortly after 9 p.m. A 5 EYEWITNESS NEWS camera at the scene caught flames shooting through a hole in the roof. 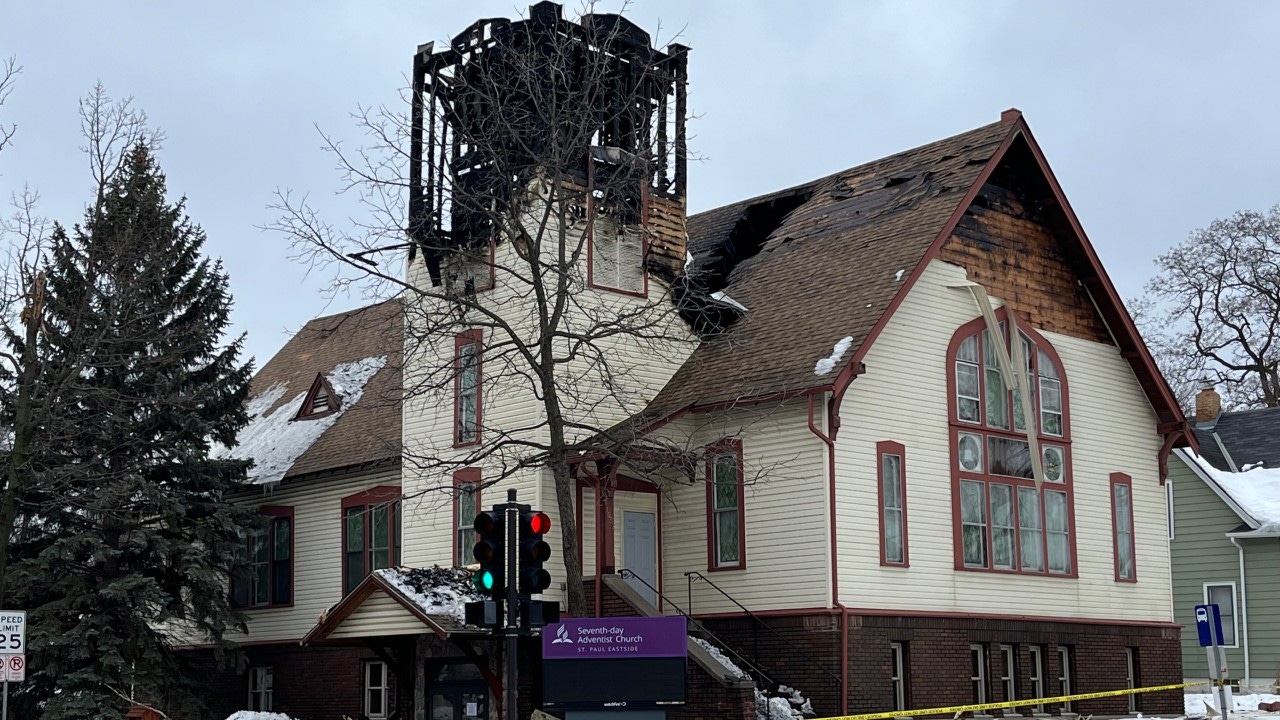 Fortunately, firefighters say nobody was inside when the fire started.

The Minnesota Conference of Seventh-day Adventists says it is still assessing the extent of the damage but noted the steeple and roof have extensive damage and said there is also “significant” water damage.

Roy Mokosso, the deputy chief for the St. Paul Fire Department, says there weren’t any signs of a break-in or forced entry at the church. He added that crews were at the scene for more than four hours, as more than 50 worked to extinguish the flames and contain hotspots.

“The weather’s not coming until tomorrow, so we got lucky with the weather — no icy conditions due to the conditions roads from the night before, so everything was kind of a good condition for tonight,” Tony Farina, the district chief for the St. Paul Fire Department, said.

Dubreuze says that, after learning of the fire, he thought about the church’s work and how that would stop, for now.

The Minnesota Conference of Seventh-day Adventists says the church provides 80 hot meals to the community on the first Sunday of each month, with the remaining food given to the homeless. The church also hosts several small Bible studies and prayer groups on Saturdays, Sundays and Wednesdays, as well as free seminars and concerts throughout the year and an annual Vacation Bible School for children.

“We’d give water or literature or food, these types of things that serve the community will be on pause until we get a new building,” Dubreuze said.

“The first thing that came to mind, I said, ‘Thank God that no life was lost, nobody was injured,’ I was also grateful to the city of St. Paul fire service for putting out, so loss is not bigger than it is,” church member Uche Onukwuwe said.

Onukwuwe says the congregation’s faith will now have to guide them through what comes next.

“Our faith in God is not for when things are going well, when life is rosy, it is for times like, faced with adversity, faced with challenges, how are you able to tap into that faith,” Onukwuwe said.

The conference says anyone wanting to help the church can make a donation online.