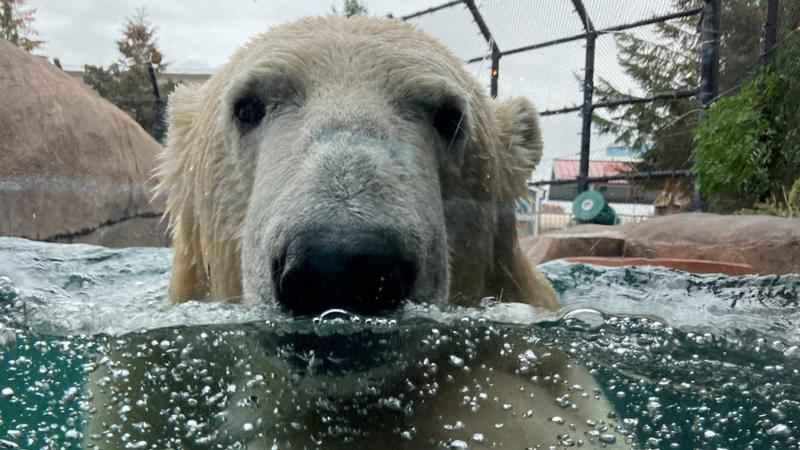 Kulu comes from the Columbus Zoo and Aquarium, where he gained a large following since his birth on Nov. 28, 2019. The move for the almost 2-year-old polar bear is based on recommendations by the polar bear Species Survival Plan and the Association of Zoos and Aquariums’ advisory group that uses a science-based approach in managing the population in North American Zoos.

The zoo says while Kulu will be able to see, smell and verbally interact with Como’s current resident polar bears Nan and Neil, they will be physically separated until Kulu completes a mandatory quarantine period.

In addition to welcoming a new resident at the zoo, Kulu also came with a new, innovative tracking device called a "tri-brush attachment." It’s just one of several prototypes in the Burr on Fur program. Developed through a partnership with Polar Bears International and Minnesotan-owned 3M, the program’s devices stick to a polar bear’s fur, providing a minimally invasive way of tracking wild polar bears.

"Traditionally, scientists have used satellite collars to follow polar bears, but the collars can only be placed on adult females," said Geoff York, senior director of conservation at Polar Bears International. "Adult males can’t be collared because their necks are as wide as their heads, and young bears grow too quickly to be safely collared. As transmitters have become smaller researchers have tested GPS ear tags and implants. But ear tags must be permanently attached, and implants require minor surgery. The devices designed by 3M represent a major potential step forward — they could be used on all classes of polar bears and would allow us to obtain critical data with the least impact possible."

Researchers study these animals’ behavior in the Arctic to better understand movement patterns and habitat use while collecting other data.

To learn more about these tracker tags that are currently in a pilot phase, click here.