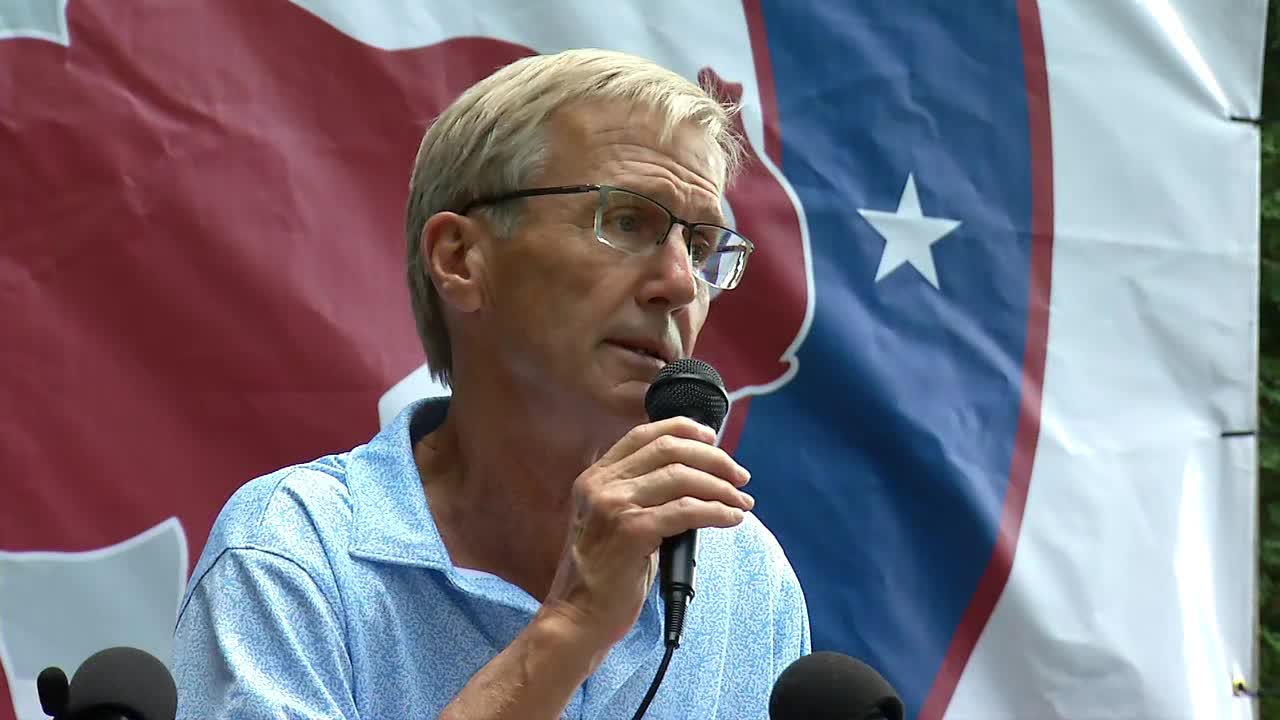 Jensen speaks on his education plan at the Minnesota State Fair (KSTP).

The pair unveiled their 10-point plan for statewide school reforms they say is meant to raise academic proficiencies, improve safety standards for students and teachers and introduce a “Parents Bill of Rights,” among other things.

“If you’re not upset with the education report that came out [last week], I don’t know what you’re thinking,” Jensen said.

The first point of Jensen’s plan, implementing a “Parents’ Bill of Rights,” aims to create a transparent system for parents to review the curriculum and books used by schools across the state.

Jensen also spoke on the goal of keeping political discussions out of class.

“When we do things like critical race theory or hypersexualize our kids with curricular questions or instructions that don’t fit at the level of grades that they’re at, we’re doing them no favors,” Jensen said.

Senate Republicans tried to pass a “Parents’ Bill of Rights” during this year’s legislative session, a package of bills that critics said would limit schools’ ability to teach about diversity and racism and even endanger LGBTQ students.

The plan also hopes to raise student achievements by “implementing scientifically proven research in schools” and providing financial incentives for teachers to work in “high-need schools,” according to the campaign website.

The candidate also criticized Gov. Tim Walz’s response to schools being closed during the height of the COVID pandemic.

While acknowledging the “uncharted territory” of the pandemic, Jensen said that many leaders on either side of the aisle now believe that shutting down schools was “absolutely the wrong thing to do.”

Jensen’s plan also emphasizes teaching “subjects with real-world application.” He shared a goal to “blow open the trades,” referring to the need to train more students in skill-based trade careers.

There are also ideas for improving school safety that include partnerships with local authorities, nonprofits and churches to address a student’s mental health needs.

Jensen also hopes to create “standardized protocols to identify and assist students who may be in need,” as well as allow key staff members to know the criminal background of violent students.

The plan includes an initiative meant to broaden choices for students and their families. The campaign website lays out the goals of redesigning “very low performing schools” and “creating a new governance structure by converting schools to charters, self-governed schools, nonpublic schools or other models for low-performing schools in their respective districts.”

Education Minnesota, an organization representing 472 unions in the state, released this statement from its president after the plan was unveiled:

“This looks like a list of greatest hits of failed and discredited policies from the past 20 years of the billionaire-funded school privatization movement, with a few nods to the latest MAGA fads of book bans, whitewashing history lessons, harassing educators and generally making schools less welcoming, inclusive and effective for all our students. Every Minnesota student, no matter their gender, how they look, or where they live, deserves a great public school in their community, with a full staff of trained educators and dedicated professionals who can provide the mental health support that students need. Our union remains committed to providing a world-class education to our students and electing politicians who will make the biggest corporations and wealthiest households pay what they truly owe our communities in taxes. That’s how Minnesota can finally fully fund its schools.”

The Walz-Flanagan campaign responded with a statement condemning the plan:

“Scott Jensen’s radical plan to convert public schools into private schools and put politicians in charge of students’ learning takes his ‘defund public education’ ideology to a new extreme. Even for someone who has long advocated for cutting funding for public schools, this is a shocking proposal that would make Betsy DeVos proud.”