MINNEAPOLIS (AP) — The Biden administration dealt a serious blow Wednesday to the proposed Twin Metals copper-nickel mine in northeastern Minnesota, ordering a study that could lead to a 20-year ban on mining upstream from the Boundary Waters Canoe Area Wilderness.

The U.S. Forest Service filed an application with the Bureau of Land Management for a “mineral withdrawal,” which would begin with a two-year comprehensive study of the likely environmental and other impacts of mining if it were permitted in the watershed that flows into the Boundary Waters.

“A place like the Boundary Waters should be enjoyed by and protected for everyone, not only today but for future generations,” Interior Secretary Deb Haaland said in a statement. “Today the Biden Administration is taking an important and sensible step to ensure that we have all the science and the public input necessary to make informed decisions about how mining activities may impact this special place.”

The Biden administration has taken several steps on the environmental front to reverse the previous administration’s initiatives. Earlier this month, President Joe Biden restored the Bears Ears and Grand Staircase-Escalante national monuments in Utah, undoing President Donald Trump’s decision to open them for mining and other development. Biden also killed the Keystone XL oil pipeline, although he has disappointed environmental and Native American groups by not stopping the Enbridge Energy Line 3 oil pipeline.

The Obama administration tried to block the Twin Metals project by launching a similar mineral withdrawal study in its final weeks, citing the potential threat to the Boundary Waters from acid mine drainage. But the Trump administration cancelled that 20 months into the 24-month process, and reinstated the project’s federal mineral rights leases, which the Obama administration did not renew. 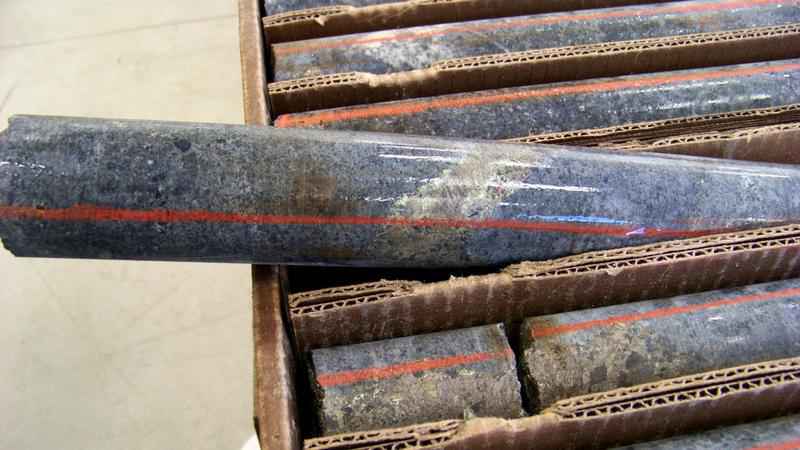 FILE - In this Oct. 4, 2011, file photo, a core sample drilled from underground rock near Ely, Minn., shows a band of shiny minerals containing copper, nickel and precious metals, center, that Twin Metals Minnesota LLC, hopes to mine near the Boundary Waters Canoe Area Wilderness in northeastern Minnesota. The Biden administration ordered a study Wednesday, Oct. 20,2021, that could lead to a 20-year ban on mining upstream from the wilderness. (AP Photo/Steve Karnowski, File)

Then, as now, one of the key decision-makers was Agriculture Secretary Tom Vilsack, who oversees the Forest Service and held the same post under President Barack Obama.

“The Boundary Waters area is an irreplaceable natural resource renowned for high quality fishing, wildlife viewing, and recreational opportunities,” Vilsack said in the announcement. He said the Forest Service and Bureau of Land Management will "complete a careful environmental analysis and engage the public on whether future mining should be authorized on any federal land adjacent to this spectacular and unique wilderness resource.”

The decision raises serious obstacles to the Twin Metals project but doesn’t kill it outright. The announcement said the order affects land upstream from the Boundary Waters, the country’s most-visited wilderness area. It prohibits issuing new prospecting permits or leases for mining-related activities in that area. The agencies said it does not affect valid existing rights or activities on private lands, including Twin Metals’ leases in the area, although they are currently the subject of a federal court challenge.

Opponents said Twin Metals could not operate if the study leads to a 20-year moratorium on mining in the area, which is the longest ban the Biden administration can impose. Only Congress could make it permanent. The government will soon begin a 90-day review process that will include participation by the public, state, local and tribal governments, and other stakeholders.

“Twin Metals Minnesota is deeply disappointed with the federal government’s action to initiate a mineral withdrawal study yet again on nearly 230,000 acres of land in northeast Minnesota, which sits on top of the world’s largest known undeveloped copper-nickel deposit," the company said in statement. “We are working to determine the best path forward to continue advancing our proposed world-class underground copper, nickel, cobalt and platinum group metals mine.”

When Twin Metals, which is owned by the Chilean mining giant Antofagasta, submitted its formal mine plan to federal and state regulators in 2019, the company said its design would prevent any acid drainage from the sulfide-bearing ore and protect the wilderness from pollution.

Environmental groups disputed that claim and challenged the lease renewals in court. They welcomed the announcement.

“This is a great first step on the pathway to permanent protection,” Becky Rom, national chair of the Campaign to Save the Boundary Waters, said in a statement. "The appropriate next step for the administration is to revoke the two Twin Metals leases that the Trump administration unlawfully reinstated.”

"This national treasure needs to be protected through sound, scientific principles, not the whims of special interests or industry. Today, the Biden administration signaled it would do just that,” Knopf said.

But Republican U.S. Rep. Pete Stauber, who represents northeastern Minnesota, accused Biden of “putting politics over science” and reneging on campaign promises to bring more mining jobs the region and secure America’s mineral supply chain. He pledged to try to reverse the decision.

“Today’s announcement further proves that the Biden Administration and Democrats in Congress are incapable of doing what’s right for union members and working families across northeast Minnesota," Stauber said in a statement.

Twin Metals is not connected to the proposed PolyMet open pit copper-nickel mine and processing plant at nearby Babbitt and Hoyt Lakes, which is much further along in the approval process. PolyMet, whose majority shareholder is Swiss commodities giant Glencore, would be Minnesota’s first copper-nickel mine but the project remains tied up in court and regulatory proceedings.