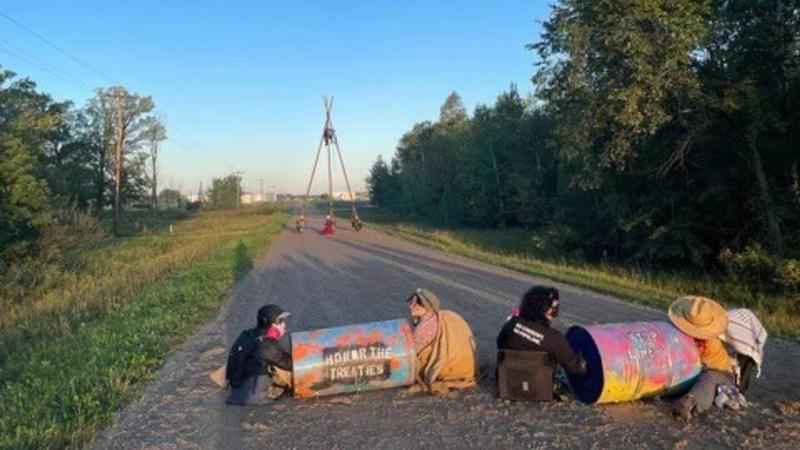 The Northern Lights Task Force made 23 arrests on Tuesday after Enbridge Line 3 protesters refused to leave the area and blocked a road in Clearwater County.

According to a report, at about 6:05 a.m., the Clearwater County Sheriff’s Office received a call on protesters blocking the road on 470th Street. The initial call reported that they were setting up a tipi and barrels in the roadway, making it so drive-thru traffic was not possible.

When law enforcement arrived on scene, it was discovered that several items had been placed in the road, spanning approximately one mile. The items included a tripod, three 55-gallon barrels filled with concrete, an overturned car, a boat and a group of six people in chairs connected with PVC pipe.

After dispersal orders were given at each location along 470th Street, a total of 23 people were arrested after refusing to leave the area.

Six people were noted to be attached to the 55-gallon barrels, four people attached to the tripod, seven attached or near the boat, and six were in the connected chairs, according to authorities. Five individuals that had been at, or attached, to the overturned car left the scene on their own before extrication teams arrived.

According to the sheriff’s office, the process to remove everyone from the objects took about seven hours to complete. Debris, including oil that had run into the ground from the overturned car, was also left behind.

The 23 people arrested are from the following locations: Massachusetts, Oregon, Maine, Illinois, South Dakota, Washington, D.C., New York and Texas. They are all being held in jail on probable cause holds for public nuisance and obstructing the legal process.