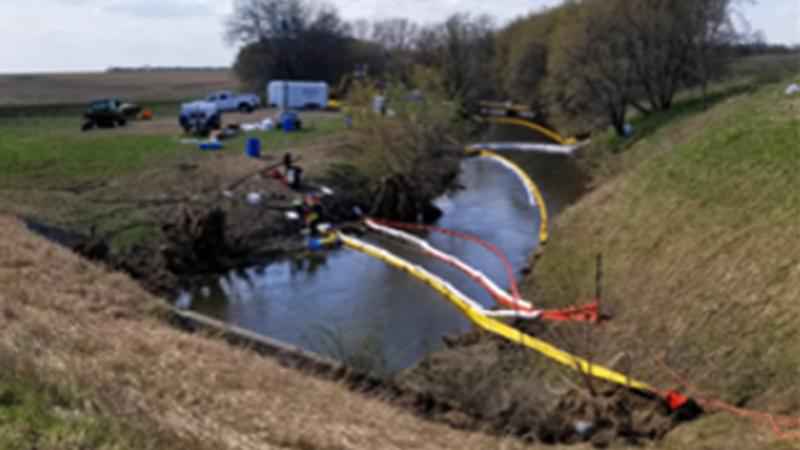 Fire departments from Cottonwood, Marshall, and Hanley Falls worked around the clock to contain and clean up a fuel oil spill in Lyon County on April 24, 2019.[Minnesota Pollution Control Agency]

Two men from southwest Minnesota have been sentenced for causing a nearly 4,000-gallon oil spill in 2019 that leaked into a river.

The U.S. Attorney’s Office says 25-year-old Eric Jay Weckworth-Pineda, of Cottonwood, Minnesota, and 21-year-old Tanner John Sik, of Ivanhoe, Minnesota, went to the northwest side of Cottonwood Lake in Lyon County on April 24, 2019, to a bridge that spans a dam between the lake and a creek called Judicial Ditch 24, which flows into the Yellow Medicine River.

Sik then fired multiple gunshots at a diesel fuel pipeline that runs perpendicular across the creek while Weckworth-Pineda spotted him using a scope on his rifle. At least one of the shots hit and ruptured the pipe. Prosecutors say when the men returned to the area later in the day and saw the pipeline was leaking, they reported it to authorities.

The owner of the pipeline, Magellan Midstream Partners, L.P., said the rupture caused at least 3,906 gallons of diesel fuel to spill into the creek, which cost over $1.1 million to clean up and repair the pipeline.

The men were each sentenced to one year of probation and ordered to pay $1,138,772.06 in restitution.