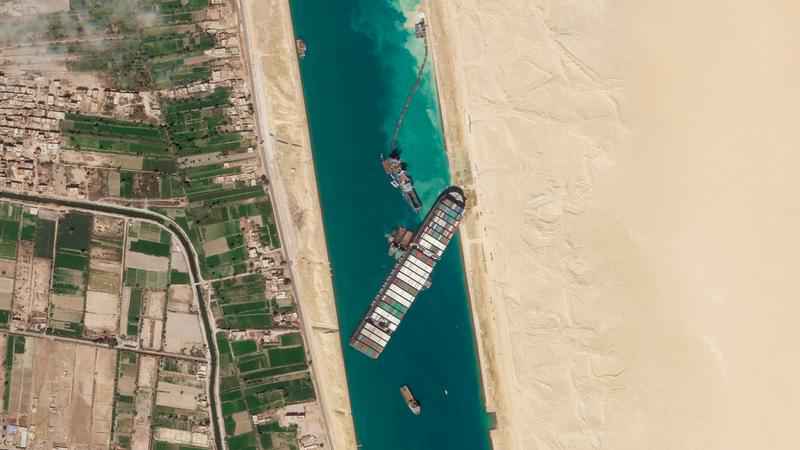 In this March 28, 2021, satellite file image from Planet Labs Inc, the cargo ship MV Ever Given sits stuck in the Suez Canal near Suez, Egypt. Consumers may face shortages and higher prices for electronics, toys, furniture and other goods should attempts to free the mammoth container ship stuck in Egypt’s Suez Canal drag on several weeks. [AP/ Planet Labs Inc.]

A canal service provider says that workers have successfully set free a colossal container ship that for nearly a week has been stuck sideways across the Suez Canal, one of the world’s most crucial arteries for trade.

Leth Agencies said that the vessel had been refloated on Monday. Helped by the peak of high tide, a flotilla of tugboats managed to wrench the bow of the skyscraper-sized Ever Given from the sandy back of the crucial waterway, where it had been firmly lodged since last Tuesday.

Tugboats were pulling the vessel toward the Great Bitter Lake, in the middle of the waterway, where it will undergo inspections.

THIS IS A BREAKING NEWS UPDATE. The following is AP’s previous story:

Engineers on Monday "partially refloated" the colossal container ship that continues to block traffic through the Suez Canal, authorities said, without providing further details about when the vessel would be set free.

Satellite data from MarineTraffic.com showed that the ship’s bulbous bow, once lodged deep in the canal’s eastern bank, had been partly wrested from the shore — although it remained stuck at the canal’s edge. The ship’s stern had swung around and was now in the middle of the waterway, tracking data showed.

Although the development marked the vessel’s most significant movement since getting stuck last week, the salvage crew urged caution as obstacles loomed.

"Don’t cheer too soon," Peter Berdowski, CEO of Boskalis, the salvage firm hired to extract the Ever Given, told Dutch NPO Radio 1.

Last Tuesday, the skyscraper-sized Ever Given got stuck sideways in the crucial waterway, creating a massive traffic jam. The obstruction has held up $9 billion each day in global trade and strained supply chains already burdened by the coronavirus pandemic. At least 367 vessels, carrying everything from crude oil to cattle, were still waiting to pass through the canal, while dozens were taking the lengthy alternate route around the Cape of Good Hope at Africa’s southern tip — a detour that costs ships hundreds of thousands of dollars in fuel and other costs.

With canal transits stopped, Egypt already has lost over $95 million in revenue, according to the data firm Refinitiv. If the ship is freed in the next few days, clearing the backlog of ships waiting to pass through the canal would take over 10 days, Refinitiv added.

The partial freeing of the vessel came after intensive efforts to push and pull the vessel with 10 tugboats when the full moon brought spring tide, canal services firm Leth Agencies said, raising the canal’s water level and hopes for a breakthrough. Videos shared widely on social media showed tugboats in the canal sounding their horns in celebration.

Even as salvage work was ongoing, Egyptian President Abdel Fattah el-Sissi portrayed the development as a victory in his first comments on the stranded vessel.

"Egyptians have succeeded in ending the crisis," he wrote on Facebook.

However, the rescue team said the ship’s bow remained stuck in the sandy clay at the canal’s edge.

"The good news is that the stern is free but we saw that as the simplest part of the job," said Berdowski, noting that workers would struggle to haul the 220,000-ton vessel over the clay of the canal bank.

An official at Shoei Kisen Kaisha Ltd., the company that owns the Ever Given, confirmed the vessel’s bow had moved slightly, but warned the bottom of the ship was touching the seafloor. The official spoke on condition of anonymity due to the sensitivity of the issue.

On Monday morning, an Associated Press journalist could see that the ship’s position had distinctly changed — where previously only the ship’s stern was visible, the ship’s side could now be seen.

Lt. Gen. Osama Rabei, the head of the Suez Canal Authority, said workers had straightened the vessel’s position by 80% and that the stern had moved 102 meters (334 feet) from the canal bank.

The price of international benchmark Brent crude dropped some 2% to just over $63 on the news.

With high tide returning at 11:30 a.m. local time on Monday, salvage crews resumed their attempts to tow the ship into the middle of the waterway. An Egyptian TV channel aired live footage of five tugboats with ropes around the ship’s bow, their engines churning, struggling to nudge it away from the shore. Weather forecasts showed strong winds, gusting up to 32 kph (20 mph).

Although the vessel is vulnerable to damage in its current position, the vessel’s owner said that the ship’s engine was functional and it would head north when freed. It wasn’t decided whether the Panama-flagged, Japanese-owned ship, would continue to its original destination of Rotterdam or if it will need to enter another port for repairs, the Shoei official said. Workers would first try to pull it toward the Great Bitter Lake, a wide stretch of water halfway between the north and south end of the canal, where it would undergo technical examination, according to canal authorities.

Ship operators did not offer a timeline for the reopening of the crucial canal, which carries over 10% of global trade, including 7% of the world’s oil. Millions of barrels of oil and liquified natural gas flow through the artery from the Persian Gulf to Europe and North America.

The unprecedented shutdown has threatened to disrupt oil and gas shipments to Europe from the Middle East and raised fears of extended delays, good shortages and rising costs for consumers.

Canal authorities have desperately tried to free the vessel by relying on tugs and dredgers alone, even as analysts warned that 400-meter-long ship may be too heavy for such an operation. As a window for a breakthrough narrows with high tide receding this week, fears have grown that authorities would be forced to lighten the vessel by removing the ship’s 20,000 containers — a complex operation, requiring specialized equipment not found in Egypt, that could take days or weeks.

The salvage team’s next step is dredging beneath the vessel’s bow with high pressure water jets to wrench the ship from the clay, said Berdowski.

"If that doesn’t work, then in the end you will have to remove weight and that can only happen by removing containers from the front," he added. "But that is a process that will take time."