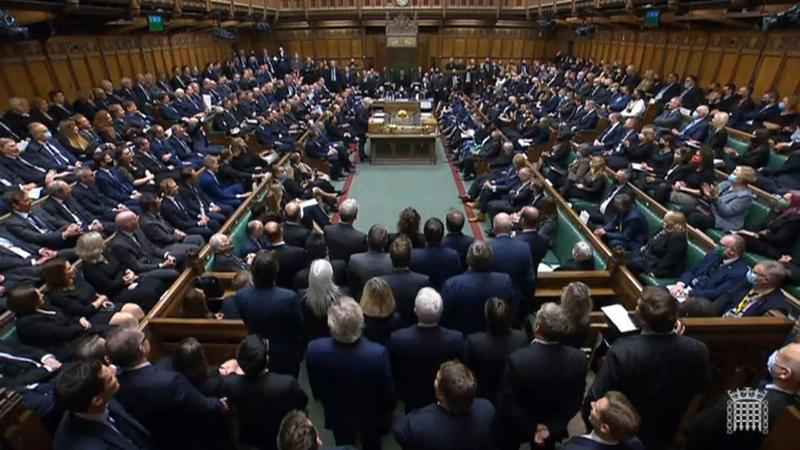 In this image from video, Britain's Prime Minister Boris Johnson speaks in the chamber of the House of Commons, London, Monday Oct. 18, 2021, where tributes will be made to honor the Conservative lawmaker David Amess, who was stabbed to death as he met constituents on Friday.[House of Commons/PA via AP]

Prime Minister Boris Johnson led a somber British Parliament on Monday in honoring the Conservative lawmaker stabbed to death as he met constituents at a church hall, an attack that has raised questions about how the country protects its politicians and grapples with extremism at home.

The tributes from shaken and grieving colleagues came as detectives tried to determine whether David Amess was targeted simply because he was a legislator, or for more individual reasons. A 25-year-old British man with Somali heritage, Ali Harbi Ali, was arrested at the scene and is being held under the Terrorism Act on suspicion of murder. Police say the suspect may have had a "motivation linked to Islamist extremism."

The prime minister told lawmakers that "this House has lost a steadfast servant."

"Sir David was taken from us in a contemptible act of violence, striking at the core of what it is to be a member of this House and violating the sanctity both of the church in which he was killed and the constituency surgery that is so essential to our representative democracy," Johnson said, referring to the open meetings British lawmakers hold with those they represent.

The death of the popular legislator — who had served in Parliament for almost 40 years and was knighted by Queen Elizabeth II in 2015 — has shocked Britain, especially its politicians. It came five years after Labour Party lawmaker Jo Cox was shot and stabbed to death by a far-right extremist. Cox was the first British lawmaker to be killed since a peace accord ended large-scale Northern Ireland violence almost 30 years earlier.

The House of Commons returned Monday from a three-week break for a session that opened with a prayer from the Speaker’s chaplain, Tricia Hillas, and a minute of silence. Then lawmakers from all parties stood to recall Amess fondly as a hard-working legislator who never sought high office but, as Johnson put it, "simply wanted to serve the people of Essex," his home county.

Amess, 69, was a social conservative who opposed abortion, campaigned for animal rights and strongly supported Britain’s exit from the European Union.

Labour Party leader Keir Starmer, who often differed with Amess politically, said the late lawmaker held his beliefs "passionately but gently," and his life was a reminder that "civility matters."

After the tributes, lawmakers crossed the street from Parliament to the medieval St. Margaret’s Church, for a memorial service that included prayers for those who "feel vulnerable in public service."

Archbishop of Canterbury Justin Welby said that, despite the horror of Amess’ death, "the light lit by public service must never be put out."

"In the face of mindless injustice, we determine to shine it all the more brightly," said Welby, the leader of the Church of England.

The government has ordered a review of lawmakers’ security following the attack on Friday in Leigh-on-Sea, a town in Amess’ Southend West constituency 40 miles (60 kilometers) east of London. British politicians are protected by armed police when they are in Parliament but generally are not given such protection in their home districts.

That is despite the fact that many politicians say the amount of abuse they receive, both online and in-person, has soared. Police in Wales said Monday they had arrested a 76-year-old man on suspicion of sending a death threat to Labour lawmaker Chris Bryant, the latest in a string of threats to politicians.

Bryant said the tenor of politics was "more sour now than I’ve known it in 20 years."

While many politicians fear for their safety, most also resist putting more barriers between themselves and the public in a country where lawmakers regularly hold "surgeries" to hear their constituents’ complaints and suggestions.

The killing has also renewed debate about the threat from people radicalized by Islamic extremist or far-right ideology.

Multiple media outlets have reported that the suspect was referred several years ago to a government-sponsored program to steer people away from extremism, but was not considered a current subject of interest by the security services.

Ali comes from a family prominent in politics in Somalia. His father, Harbi Ali Kullane, a former adviser to Somalia’s prime minister, told the Sunday Times he was "traumatized" by the attack and his son’s arrest.

Ali is being questioned at a police station and has not yet been charged or appeared in court. Police have until Friday to charge or release him — though that time can be extended. They are working to determine what, if any, connection he had to Amess.

Amess had campaigned for children with disabilities, women with endometriosis and — tirelessly — for the town of Southend to be made a city. To cheers in Parliament on Monday, Johnson announced that the queen had agreed to grant Southend city status.

U.K. investigators so far have not found any evidence that the link to Qatar is significant.

On Monday, lawmakers and parliamentary staff left bouquets of flowers and handwritten notes in a courtyard at Parliament. Outside the Methodist church in Leigh-on-Sea, his widow, Julia, wiped away tears as she viewed the many flowers, notes and cards left by residents.

Amess’ family said in a statement that they were struggling to comprehend what had happened.

"We ask people to set aside their differences and show kindness and love to all," said Julia Amess and the couple’s five children. "This is the only way forward. Set aside hatred and work towards togetherness."