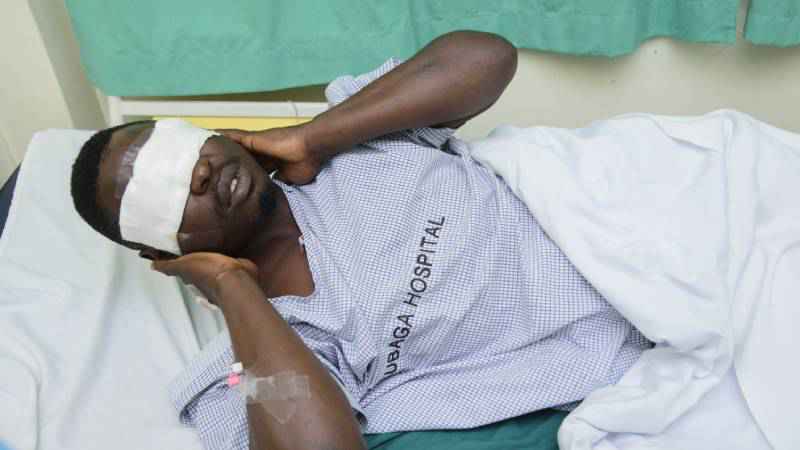 The opposition party of Ugandan presidential challenger Bobi Wine said on Monday that police have prevented top officials from going to their headquarters in the capital, Kampala, as they prepare to launch a legal challenge to free Wine from house arrest.

Wine, whose real name is Kyagulanyi Ssentamu, was the main challenger in presidential elections last week that electoral authorities say long-time leader Yoweri Museveni won with 58% of the vote.

Wine, who took 34% of the vote, has rejected the official outcome as fraudulent and insists he will use all legal means to protest the allegedly “cooked-up” results. Wine can petition the East African nation’s Supreme Court, but justices have been reluctant to rule against Museveni in previous election suits.

Wine’s party has said it has video evidence of the military stuffing ballot boxes, casting ballots for people and chasing voters away from polling stations.

Opposition lawmaker Medard Sseggona, an attorney for Wine, said he feared police would seize any vital information related to the polls that was kept at the party’s headquarters.

Museveni has dismissed the claims of vote-rigging.

“I think this may turn out to be the most cheating-free election since 1962,” when Uganda won independence from Britain, said Museveni in a national address on Saturday.

But the election was marred by violence ahead of polling day as well as an internet shutdown that remained in force until Monday morning, when access was restored for most Ugandans. Social media sites remain restricted.

‘The world is watching’: Ugandans vote in tense election

Wine has been effectively under house arrest since he cast his vote and now is allegedly unable even to receive visitors. Police thwarted opposition officials who were trying to meet with Wine at his home outside Kampala in order to discuss the way forward, Ssenyonyi said. Lawmaker Francis Zaake has been hospitalized after allegedly being assaulted by police who denied him access to Wine’s house on Saturday.

The opposition party will seek a court order to end Wine’s apparent house arrest, Ssenyonyi said. “His home is not a detention facility,” he said.

Ugandan police are holding at least 223 suspects over election-related offenses, police said in a statement Monday.

Police spokesman Fred Enanga said security forces are “maintaining a security presence” around Wine’s home as a pre-emptive measure against possible rioting in the aftermath of the disputed polls. Wine is allowed to leave his home under “escort” in order to prevent his followers from “instigating riots and violent demonstrations," he said.

Police similarly surrounded the home of opposition candidate Kizza Besigye after presidential elections in 2016, preventing him from going out after the official results of his loss to Museveni had been declared.

Wine has said his campaign against Museveni is nonviolent and that his followers are unarmed.

In a generational clash watched across the African continent with a booming young population and a host of aging leaders, the 38-year-old singer-turned-lawmaker posed arguably the greatest challenge to Museveni, 76, since he came to power in 1986.

Calling himself the “ghetto president,” Wine had strong support in Uganda’s cities, where frustration with unemployment and corruption is high. Museveni’s support is concentrated in rural areas, where many still praise him for bringing stability. A long-time U.S. security ally once praised as part of a new generation of African leaders, Museveni at the start of his presidency criticized African leaders who refused to step aside but has since overseen the removal of constitutional limits on the presidency.

Uganda’s elections are often marked by allegations of fraud and abuses by security forces.

“We reiterate our intention to pursue action against those responsible for the undermining of democracy and human rights in Uganda,” it said.