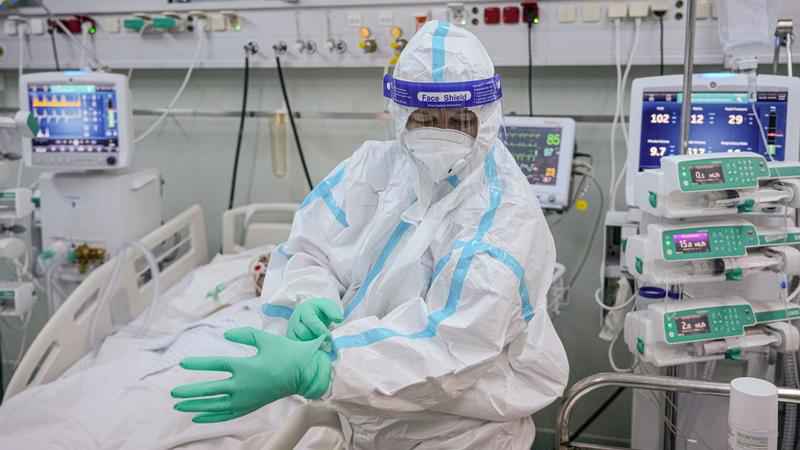 A member of the medical staff puts on an extra pair of gloves in the COVID-19 ICU unit of the Marius Nasta National Pneumology Institute in Bucharest, Romania, Thursday, Sept. 23, 2021. Daily new coronavirus infections in Romania, a country of 19 million, have grown exponentially over the last month, while vaccine uptake has declined to worrying lows. Government data shows that 91.5% of COVID-19 deaths in Romania between Sept. 18-23 were people who had not been vaccinated. (AP Photo/Vadim Ghirda)

In a packed intensive care unit for coronavirus patients in Romania’s capital, Bucharest, 55-year-old Adrian Pica sits on his bed receiving supplementary oxygen to help him breathe. "I didn’t want to get vaccinated because I was afraid," he said.

Around 72% of adults in the 27-nation European Union have been fully vaccinated against COVID-19, but a stubbornly low uptake of the shots in some eastern EU nations now risks overwhelming hospitals amid a surge of infections due to the more contagious delta variant.

"Until now I didn’t believe in COVID-19," Pica, who said his early symptoms left him sweating and feeling suffocated, told The Associated Press. "I thought it was just like the flu. But now I’m sick and hospitalized. I want to get a vaccine."

Bulgaria and Romania are lagging dramatically behind as the EU’s two least-vaccinated nations, with just 22% and 33% of their adult populations fully inoculated. Rapidly increasing new infections have forced authorities to tighten virus restrictions in the two countries, while other EU nations such as France, Spain, Denmark and Portugal have all exceeded 80% vaccine coverage and eased restrictions.

Stella Kyriakides, the EU’s health commissioner, said the "worrying gap" on vaccinations needs urgently addressing. Slovakia, Croatia and Latvia have vaccinated around 50% of all their adults. But jab uptake in many Central and Eastern European countries has remained weak or declined.

In Norway, where about 70% of the population has been vaccinated, authorities on Saturday scrapped restrictions that Prime Minister Erna Holberg called "the strictest measures in peacetime."

Nordic neighbor Denmark lifted virus restrictions on Sept. 10, while the U.K. has also abandoned most pandemic restrictions due to high vaccine rates.

In contrast, at Bucharest’s Marius Nasta Institute of Pneumology, the ICU’s chief doctor, Genoveva Cadar, says the beds are now at 100% capacity and around 98% of all the virus patients are unvaccinated.

"In comparison to previous waves, people are arriving with more severe forms" of the disease, she said, adding that many patients in this latest surge are younger than in previous ones. "Very quickly they end up intubated — and the prognosis is extremely bleak."

New daily coronavirus cases in Romania, a country of 19 million residents, have grown exponentially over the last month, while the number of people getting vaccinated has declined to worrying lows.

On Sunday, 1,220 of Romania’s 1,239 ICU beds for virus patients were occupied. In many cases, only deaths freed up spaces. At the Marius Nasta Institute, a mobile ICU on hospital grounds that opened Monday was already full.

"I don’t know how we’re going to get over the next period, but we’re definitely going to be here," hospital manager Beatrice Mahler told the AP. "We’re going to do everything we can (but) we don’t have a winning recipe."

Vlad Mixich, a Romanian public health specialist, told the AP that a "historic distrust of authorities" together with what he said was a very weak government vaccination campaign has contributed to the low vaccine uptake among his compatriots.

"During the vaccination campaign, unfortunately, the politicians were the main communicators," he said, adding that a frequent turnover in the country’s health ministers has had a massive impact on efforts to inoculate Romanians.

In neighboring Bulgaria, an alarming 23% of people said they do not want to get vaccinated, compared with only 9% across the bloc, according to a Eurobarometer survey.

Sabila Marinova, the ICU manager at a hospital in Bulgaria’s northern town of Veliko Tarnovo, says none of its COVID-19 patients is vaccinated.

"We are very exhausted," she said. "It seems that this horror has no end."

The vice president of Romania’s national vaccination committee, Andrei Baciu, said that fake news has been a key factor in keeping people from getting jabbed.

"There is and was a culture that promotes fake news. We are working with a team of specialists to combat (it) … right now there is a high number of (infections) due to low vaccination rates," he said, adding that the government is looking to increase ICU capacity.

Sometimes medical workers in Eastern Europe face additional risks. In September in Bulgaria’s port city of Varna, a group opposed to vaccines attacked a medical team at a mobile vaccination station. Health Minister Stoycho Katsarov condemned the attack, saying "we will not allow our medics to be insulted, publicly harassed and humiliated" for trying to save lives.

The implementation of vaccine passports, which allow people to show their vaccine status to carry out day-to-day activities, may be one of few options left for European governments at a loss on how to encourage their vaccine-hesitant citizens to get jabbed.

Experts say vaccine skeptics in parts of Europe could hamper the entire continent’s efforts to end the pandemic.

Back at the Marius Nasta Institute, Nicoleta Birtea, a 63-year-old unvaccinated COVID-19 patient who had previous health issues, says she woke up a month ago feeling dizzy and ill and called for an ambulance.

"I hope that I got here on time," she said, adding "I understand very clearly that the vaccine can’t protect you."