Number of injured in Russia school shooting rises to 23 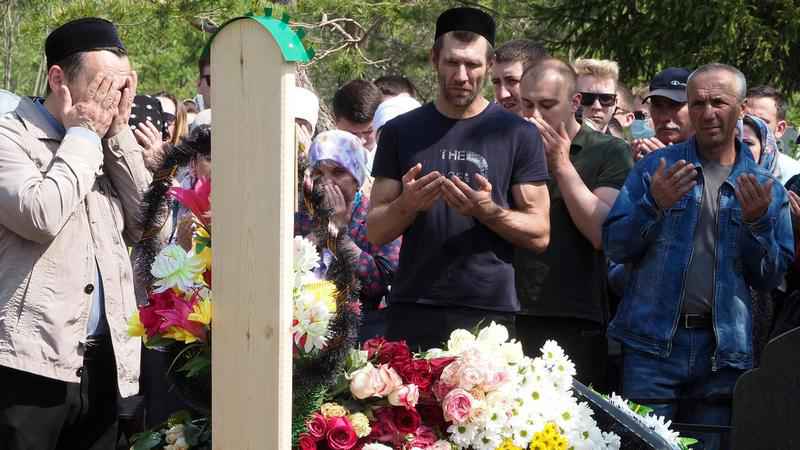 People pray next to the grave of Elvira Ignatieva, an English language teacher who was killed at a school shooting on Tuesday in Kazan, Russia, Wednesday, May 12, 2021. Russian officials say a gunman attacked a school in the city of Kazan and Russian officials say several people have been killed. Officials said the dead in Tuesday's shooting include students, a teacher and a school worker. Authorities also say over 20 others have been hospitalised with wounds.[AP Photo/Dmitri Lovetsky]

Twenty-three people remained hospitalized on Wednesday following a school shooting in the Russian city of Kazan which killed nine people, including seven youngsters.

All 23 were in stable condition Wednesday morning, the authorities said, though at least eight people — three adults and five children — were to be transferred to Moscow for treatment.

A gunman on Tuesday morning attacked a school in Kazan, a city 430 miles (700 kilometers) east of Moscow, sending students hiding under their desks or running out of the building. Nine people — seven students and two school employees — were killed.

The attacker, identified only as a 19-year-old, was arrested. The authorities gave no immediate details on a motive, but said he legally owned a firearm.

Wednesday was declared a day of mourning in Tatarstan, the Russian region of which Kazan is the capital, with funerals of the victims expected to take place.

Russian media said the gunman was a former student at the school who called himself “a god” on his account on the messaging app Telegram and promised to “kill a large amount of biomass” on the morning of the shooting.

Attacks on schools are rare in Russia, and President Vladimir Putin reacted by ordering the head of the country’s National Guard to revise regulations on the types of weapons allowed for civilian use.

The deadliest school attack in Russia took place in 2004 in the city of Beslan, when Islamic militants took more than 1,000 people hostage for several days. The siege ended in gunfire and explosions, leaving 334 dead, more than half of them children.

In 2018, a teenager killed 20 people at his vocational school before killing himself in Kerch, a city in the Russian-annexed peninsula of Crimea. In the wake of that attack, Putin also ordered authorities to tighten control over gun ownership. But most of the proposed measures were turned down by the parliament or the government.

Russian lawmaker Alexander Khinshtein said on Telegram that the suspect in the Kazan attack received a permit for a shotgun less than two weeks ago and that the school had no security aside from a panic button. Authorities did not specify what kind of gun the attacker used.

Officials in Kazan said the school had a doorperson for security during day time, and she was the one who hit the panic button, alerting law enforcement about the attack.

Russian officials promised to pay families of those killed 1 million rubles (roughly $13,500) each and said that the payments will be wired by the end of day Wednesday.