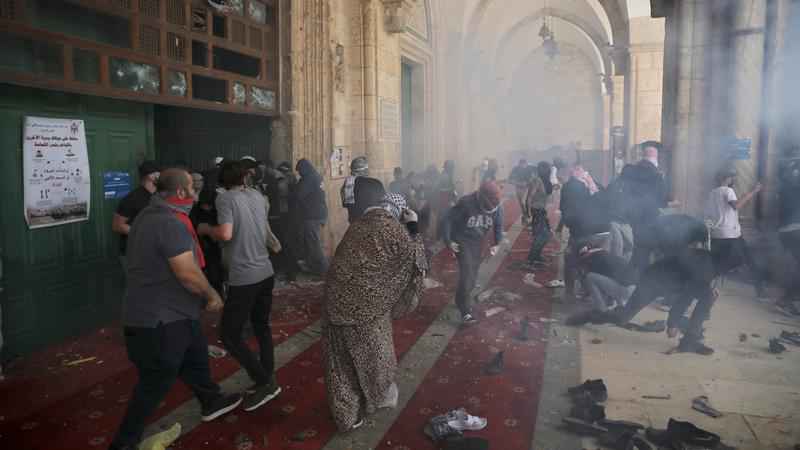 Palestinians clash with Israeli security forces at the Al Aqsa Mosque compound in Jerusalem's Old City Monday, May 10, 2021. Israeli police clashed with Palestinian protesters at a flashpoint Jerusalem holy site on Monday, the latest in a series of confrontations that is pushing the contested city to the brink of eruption. Palestinian medics said at least 180 Palestinians were hurt in the violence at the Al-Aqsa Mosque compound, including 80 who were hospitalized.[AP Photo/Mahmoud Illean]

Israeli police firing tear gas, stun grenades and rubber bullets clashed with stone-throwing Palestinians at a flashpoint Jerusalem holy site on Monday, the latest in a series of confrontations that threatened to push the contested city toward wider conflict.

More than a dozen tear gas canisters and stun grenades landed in the Al-Aqsa mosque, located in a compound sacred to both Jews and Muslims, said an Associated Press photographer at the scene. Smoke rose in front of the mosque and the iconic golden-domed shrine on the site, and rocks littered the surrounding plaza. Inside one area of the compound, shoes and debris lay scattered over ornate carpets.

Monday’s confrontation was the latest after weeks of mounting tensions between Palestinians and Israeli troops in the Old City of Jerusalem, the emotional center of their conflict. The clashes have come during the Muslim holy month of Ramadan, already a time of heightened religious sensitivities.

Most recently, the tensions have been fueled by an eviction plan in an Arab neighborhood of east Jerusalem where Israeli settlers have waged a lengthy legal battle to take over properties.

Hundreds of Palestinians and about two dozen police officers have been hurt over the past few days in clashes at the sacred compound, which is known to Jews as the Temple Mount and to Muslims as the Noble Sanctuary. The compound, which, has been the trigger for rounds of Israel-Palestinian violence in the past, is Islam’s third-holiest site and considered Judaism’s holiest.

An AP photographer at the scene said that early Monday morning, protesters had barricaded gates to the walled compound with wooden boards and scrap metal. Sometime after 7. a.m., clashes erupted, with those inside throwing stones at police deployed outside. Police entered the compound, firing tear gas, rubber-coated steel pellets and stun grenades.

At some point, about 400 people, both young protesters and older worshippers, were inside the carpeted Al-Aqsa Mosque. Police fired tear gas and stun grenades into the mosque.

Police said protesters hurled stones at officers and onto an adjoining roadway near the Western Wall, where thousands of Israeli Jews had gathered to pray.

After several days of Jerusalem confrontations, Israel has come under growing international criticism for its heavy-handed actions at the site, particularly during Ramadan.

Prime Minister Benjamin Netanyahu pushed back against the criticism Monday, describing Israel’s actions in Jerusalem as a law-and-order issue. Netanyahu said Israel is determined to ensure the rights of worship for all and that this “requires from time to time stand up and stand strong as Israeli police and our security forces are doing now.”

Ofir Gendelman, a spokesman for Netanyahu, claimed in a tweet that “extremist Palestinians planned well in advance to carry out riots” at the holy site, sharing photos of mounds of stones and wooden barricades inside the compound.

Ayman Odeh, a leading Arab politician in Israel, blamed the violence on Israel’s discriminatory policies toward the Palestinians and said it had provoked the violence. “Wherever you find occupation, you will find resistance,” he said at a news conference in Sheikh Jarrah, near the homes whose residents are under threat of eviction.

In other violence, Palestinian protesters hurled rocks at an Israeli vehicle driving just outside the Old City walls. The driver later told public broadcaster Kan that his windows were smashed by stones and pepper spray shot into the car as he drove past the Old City. CCTV footage of the incident released by the police showed a crowd surrounding the car and pelting it with rocks, its rear window shattered, when it swerved off the road and into a stone barrier and a bystander.

The day began with police announcing that Jews would be barred from visiting the holy site on what Israelis mark as Jerusalem Day, with a flag-waving parade through the Old City that is widely perceived by Palestinians as a provocative display in the contested city. The marchers celebrate Israel’s capture of east Jerusalem in the 1967 Mideast war.

In that conflict, Israel also captured the West Bank and Gaza Strip. It later annexed east Jerusalem and considers the entire city its capital. The Palestinians seek all three areas for a future state, with east Jerusalem as their capital.

Police have allowed the Jerusalem Day parade to take place despite growing concerns that it could further inflame tensions after violence has occurred almost nightly throughout Ramadan.

It began when Israel blocked off a popular spot where Muslims traditionally gather each night at the end of their daylong fast. Israel later removed the restrictions, but clashes quickly resumed amid tensions over the planned eviction of Palestinians from the Arab neighborhood of Sheikh Jarrah.

Israel’s Supreme Court postponed a key ruling Monday that could have forced dozens of Palestinians from their homes, citing the “circumstances.”

The Israeli crackdown and planned evictions have drawn harsh condemnations from Israel’s Arab allies and expressions of concern from the U.S., European Union and United Nations.

The tensions in Jerusalem have threatened to reverberate throughout the region.

Palestinian militants in the Gaza Strip have fired several barrages of rockets into Israel, and protesters allied with the ruling Hamas militant group have launched dozens of incendiary balloons into Israel, setting off fires across the southern part of the country.

In response, COGAT, the Israeli Defense Ministry organ responsible for crossings with the Gaza Strip, announced Monday that it was closing the Erez crossing to all but humanitarian and exceptional cases until further notice.