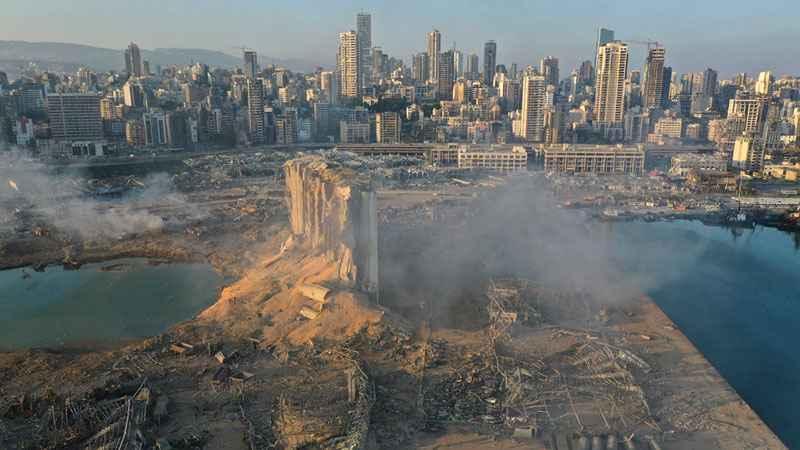 A drone picture shows the scene of an explosion at the seaport of Beirut, Lebanon, Wednesday, Aug. 5, 2020. A massive explosion rocked Beirut on Tuesday, flattening much of the city's port, damaging buildings across the capital and sending a giant mushroom cloud into the sky. More than 70 people were killed and 3,000 injured, with bodies buried in the rubble, officials said.[AP/Hussein Malla]

Lebanon’s highest court on Thursday asked the chief prosecutor investigating last year’s massive Beirut port explosion to step down, following legal challenges by senior officials he had accused of negligence that led to the blast, a judicial official and the country’s official news agency said.

The Court of Cassation called for a new investigating judge to be appointed to lead the probe, nearly six months after it had started.

The development is likely to further delay the investigation into the horrific explosion that killed more than 200 people, wounded over 6,000 and disfigured much of Beirut. Families of the victims and survivors had blamed the ruling political class for corruption and negligence that led to the explosion of ammonium nitrate, a dangerous chemical that had been stored in the port for years. They planned a protest outside the Palace of Justice later on Thursday.

Human Rights Watch, the New-York based watchdog, said the decision to remove Investigating Judge Fadi Sawwan “makes a mockery of justice’" and is an “insult to the victims."

The explosion, one of the largest non-nuclear blasts in history, has been one of the most traumatic national experiences the Lebanese have faced. Family members of those killed had been skeptical of a transparent and independent investigation into the Aug. 4 explosion, in a country where a culture of impunity has prevailed for decades.

Judge Sawwan had accused and summoned for questioning Lebanon’s caretaker prime minister and three former ministers on suspicion of negligence that led to the deadly explosion.

Two of the former ministers challenged Sawwan in court in December, accusing him of violating legal and constitutional procedures and asking that he be recused. Last month, the Court of Cassation had asked Sawwan to resume his work while it looks into the complaints.

On Wednesday, he summoned the third former minister for questioning. The minister tweeted that he would not show up.

Details of the court’s decision were not made public. A judicial official, speaking on condition of anonymity because he was not authorized to speak to the media, said the office of the attorney general had received a copy of the decision. The official said all summoning now are off since Sawwan has been asked to step down.

According to the law, the minister of justice now has to propose a new lead investigator, before a government-appointed judicial body signs off on the nomination.

Sawwan’s appointment process itself was considered opaque and the investigation, s o far secret, has been tainted with political interference, Human Rights Watch has said. Two judges named by the justice minister before Sawwan were rejected without an explanation by the body in charge of approving the selection.

The families of the victims had welcomed Sawwan’s decision to summon senior officials, saying no senior politician should be spared.

After the decision was announced, Kayan Tleis, whose 40-year-old-brother was killed in the blast, said Sawwan was up against major political actors.

“We had put a lot of hope in Judge Sawwan. But there were lots of political pressure on him, and once he started summoning senior officials, it was likely they would get rid of him or take the file away,” Tleis said.

Aya Majzoub, Lebanon researcher at Human Rights Watch, said Thursday’s decision shows the courts in Lebanon “have drawn the red lines: politicians are not subject to the rule of law.”

“There were many serious problems with Sawan’s investigation, and there may have been legitimate reasons to challenge his investigation," she said. “But the mere fact that he charged politicians is not one of them.”

“This charade needs to end," she added and called for an independent international investigation.