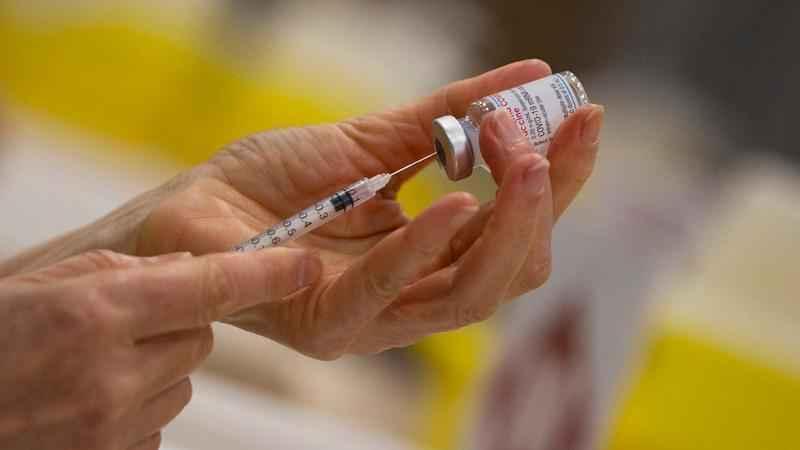 In this file photo dated Wednesday, April 14, 2021, a pharmacist fills a syringe from a vial of the Moderna COVID-19 vaccine in Antwerp, Belgium. Moderna and vaccine promoter Gavi have announced Monday May 3, 2021, the pharmaceutical company will provide up to 500 million coronavirus vaccine doses for the U.N.-backed program for needy people in low- and middle-income countries by the end of 2022.[AP Photo/Virginia Mayo]

Almost 80% of adults in Germany are fully vaccinated and about 84% have received at least one shot, according to the country’s disease control center, the Robert Koch Institute. That’s some 3.5 million people higher than previously stated.

"The discrepancy between the numbers that had been reported so far and those that the Robert Koch Institute now found out about in surveys is due to the fact that some vaccinations may not have been reported," Health Minister Jens Spahn told reporters in Berlin.

He added that vaccinations of employees at big companies and those given shots by mobile vaccination teams in nursing centers and elsewhere, in particular, may not have been fully reported.

The new figures by the Robert Koch Institute are based on surveys and did not include people under the age of 18, which is why the agency did not yet give a new overall number of vaccinated people in Germany, but has so far only adjusted the number of vaccinated adults. Anybody aged 12 and older is eligible for a coronavirus vaccination in Germany.

Spahn said the higher-than-thought number of fully vaccinated people in Germany would give the country more security in the pandemic as fall and winter are approaching — a period during which people spend more time inside leading to possible higher COVID-19 infection rates again.

While the health minister warned it was still too early to stop wearing face masks inside or on public transportation, he suggested it would be fine to no longer wear masks outside.

On Thursday, the Robert Koch Institute reported 11,644 new infections among the country’s 83 million inhabitants. The agency said another 68 deaths had been reported in the last 24 hours bringing the overall death toll to 94,027.

Also Thursday, Germany’s standing vaccination committee issued a draft recommendation for people above 70, nursing home residents and employees of medical facilities with direct patient contact to get a booster shot with an mRNA vaccine six months or more after their second shot.

In addition, it recommended that people who were given the single-dose Johnson & Johnson vaccine get a booster shot with an mRNA vaccine.

The committee said that the proportional number in Germany of people who were infected with COVID-19 despite being vaccinated was particularly high among those who received Johnson & Johnson, and said a "comparatively low" effectiveness against the delta variant had been observed.

"Because of the insufficient vaccination protection" after the single dose, the committee recommended an extra shot of an mRNA vaccine four weeks or more after the Johnson & Johnson vaccination.

While people can catch COVID-19 despite being vaccinated, they are much less likely to develop severe cases of the illness that result in hospitalization or death.