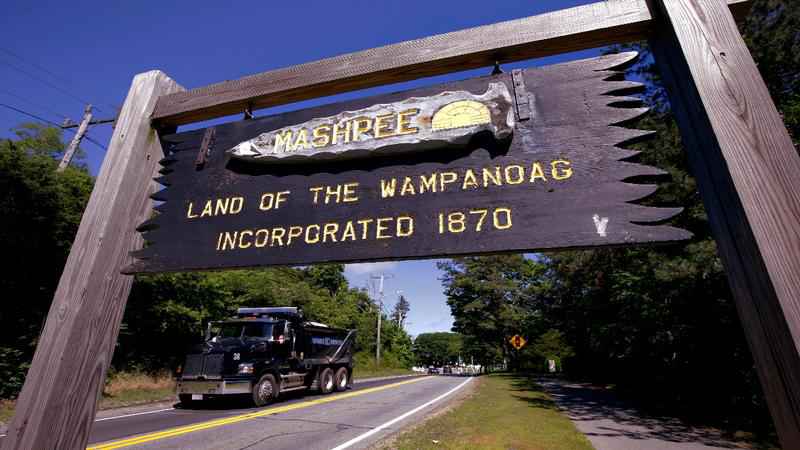 A wooden sign advises motorists of the location of Mashpee Wampanoag tribal lands, June 25, 2018, in Massachusetts. The tribe scored a major victory in its years long battle to preserve its reservation in December 2021, but it doesn't mean the Massachusetts tribe's path to building a resort casino on the sovereign lands has become any clearer. [AP Photo/Steven Senne, File]

As he begins his first full year in office, the new head of a Massachusetts tribe says he intends to take a cautious approach to gambling while turning attention to social challenges and other economic opportunities for its members.

Mashpee Wampanoag Tribe Chairman Brian Weeden, who is 29 and is the youngest ever to old the post, said last month’s decision by President Joe Biden’s administration to affirm the tribe’s reservation and reverse a controversial Trump-era order gives the tribe legal footing to continue pursuing its long standing casino dreams.

But he said tribal leaders also want members to look at the idea with fresh eyes, given how much the landscape for gambling has changed.

"We’re back to the drawing board, basically," said Weeden, who took office in May, in a wide-ranging interview Thursday. "There’s still an appetite for gaming. It just needs to be a smart approach. It has to be different from the past. We need to learn from our mistakes and proceed with caution."

Meanwhile, anti-casino residents in Taunton, the city where the Mashpee Wampanoag project is proposed, have asked a Boston federal judge to reopen their legal challenge.

They argue, as they have before, that the tribe wasn’t eligible for a reservation because it wasn’t an officially recognized tribe in 1934, the year the federal Indian Reorganization Act, which laid the foundation for modern federal Indian policy, became law.

Weeden said the latest legal challenge won’t deter the tribe, which traces its ancestry to the Native Americans whom the Pilgrims encountered centuries ago but which was federally recognized only in 2007.

Just prior to last month’s decision, the tribe extended its deal with its Malaysian casino developer partners, Genting Berhad, for another year, according to Weeden.

But he said the tribe, which has roughly 3,000 members, is looking to reach new financial terms to rein in its debt to the gambling giant, which is about $600 million and growing, but which comes due only if a gambling hall actually opens. Company spokespersons didn’t respond to emails seeking comment.

Weeden said tribal members should also consider whether to scale back their casino ambitions.

Before litigation and the Trump administration order derailed it, the tribe broke ground in 2016 on a $1 billion resort casino in a former industrial park. Dubbed First Light, the resort was to include a hotel and shopping, dining and entertainment options, including a water park.

Opting to build a more modest slot parlor or bingo hall, Weeden said, would exempt it from a 17% state tax on gaming revenues, even if it meant not being able to offer popular table games like blackjack and poker.

Weeden said the tribe also shouldn’t rule out abandoning the casino plan altogether and finding other ways to bring financial stability to the tribe. He’d like to see it look into opening tax-free smoke shops, tax-free gas stations, recreational marijuana shops, and other economic development initiatives on its lands.

"We need to exercise our sovereignty," Weeden said. "Casinos are just low-hanging fruit."

The new chair says he also intends to focus more on homelessness, substance use and other social ills facing the tribe.

Next month, tribal leaders hope to present to members a plan to spend down the tribe’s roughly $15 million allocations from Biden’s coronavirus stimulus bill. Weeden says they will also pursue federal funds through the $1.2 trillion infrastructure bill Biden recently signed into law, which includes some $11 billion for tribes.

Among the projects being considered is the construction of tiny homes or cabins where homeless members can live temporarily, Weeden said. The tribe also hopes to bolster staffing and programming for substance use, mental health and other critical health services.

And with the national reckoning on racism reviving calls for reparations for Black slavery, Weeden said the tribe also intends to step up its own calls for restitution.

He says the state should return seized lands or provide financial compensation as the tribe’s current landholdings represent less than 1% of its ancestral territory.

"Everything going on in this country around social injustice and racial injustice, that’s all fine and good," Weeden said. "But the original inhabitants of this country are still fighting for what little land we have. Native Americans still don’t have their fair share."