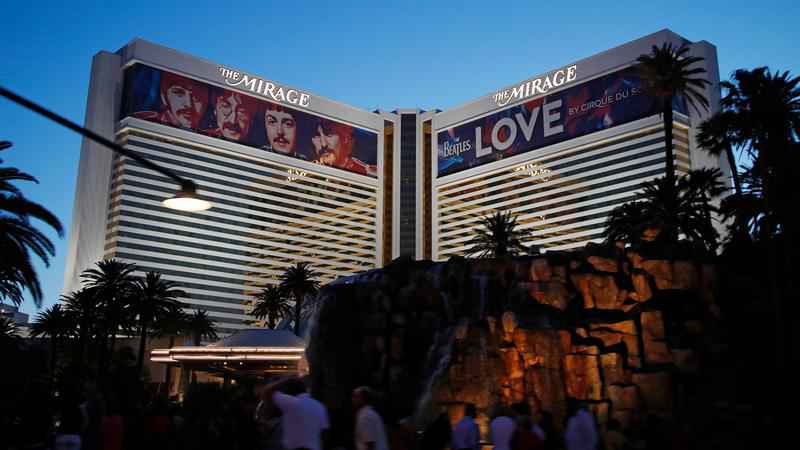 Hard Rock International said Monday it wants to see how a guitar-shaped hotel will play at the heart of the Las Vegas Strip.

In what MGM Resorts International CEO and President Bill Hornbuckle called "a significant milestone for MGM Resorts and for Las Vegas," the companies announced MGM Resorts will sell operations of The Mirage to Hard Rock International in a cash deal worth almost $1.1 billion.

It wasn’t immediately clear if the iconic Mirage volcano fountain will remain at the property that former casino mogul Steve Wynn opened with a Polynesian theme in November 1989. MGM Resorts acquired the 3,000-room resort in 2000.

The underlying Mirage real estate is now owned by MGM Growth Properties, which is being bought by New York-based VICI Properties in a $17.2 billion deal expected to close next year.

"This announcement marks the culmination of a series of transformational transactions for MGM Resorts during the last several years," said Paul Salem, Chairman of the MGM Resorts board of directors.

"The monetization of our entire real property portfolio, together with the addition of CityCenter and our agreement to acquire The Cosmopolitan of Las Vegas, will position the company with a fortress balance sheet, premier portfolio and significant financial resources to pursue our strategic objectives," he said.

Jonathan Halkyard, MGM Resorts treasurer and chief financial officer, said that as the real estate owner of The Mirage, VICI will be expected to reach a new lease agreement with Hard Rock.

Allen said Hard Rock International will welcome The Mirage’s 3,500 employees to its roster.

He noted that his company had no previous involvement with the former Hard Rock Hotel & Casino that operated from 1995 to 2020 east of the Las Vegas Strip. That property was purchased in 2018 and renovated and rebranded by Virgin Hotels Las Vegas with a gambling floor operated by Mohegan Sun Casino.

Hard Rock International bought the naming rights in May 2020 with plans to eventually open a Las Vegas Strip property.

Under the terms of the agreement, MGM Resorts will keep The Mirage name and brand, licensing it to Hard Rock royalty-free for up to three years while it finalizes its plans to rebrand the property.

The transaction is expected to close in the second half of 2022, following regulatory approvals.

The sale is one of several involving MGM Resorts in recent months on Las Vegas Boulevard. The company currently operates 13 hotel-casino properties in Las Vegas and 32 worldwide.

The Las Vegas-based company said in July it would buy out its partner in the sprawling CityCenter development for $2.1 billion, take control of The Aria and Vdara resorts, and lease the property to New York private equity firm Blackstone Group for nearly $3.9 billion.

MGM Resorts announced in September it will buy operations of The Cosmopolitan of Las Vegas for $1.6 billion from Blackstone. That is part of a $5.65 billion deal to put ownership of the 3,000-room Cosmopolitan in hands of the Cherng Family Trust, headed by Panda Express billionaires Andrew and Peggy Cherng; real estate investment firm Stonepeak Partners; and a Blackstone real estate fund, Real Estate Income Trust Inc.