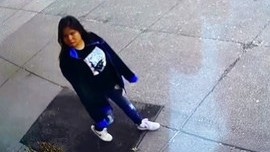 Brooklyn Park Police said the missing girl has been found safe. She was located by an alert community member and has been retuned.

PREVIOUS STORY: An alert from the Brooklyn Park Police Department said officers are searching for a vulnerable juvenile.

The news release states that officers responded to a report of a missing juvenile at about 6:30 p.m. on Saturday. The girl was last seen at 7980 Brooklyn Boulevard in Brooklyn Park.

The missing girl was last seen leaving a barber shop. Police said initial reports indicate she may have left with an unknown male. That male is described as Black, wearing a lightweight coat with black pants and a trimmed beard.

The photos below were taken at the time the girl went missing, according to police. Anyone with information is asked to call 911.