Veterans Memorial Park in Blaine is a place of honor and remembrance.

“When you’ve been shot at and depended on each other in the most highest of stakes imaginable, you just become pretty close,” says Eric Bakken, a U.S. Army veteran who served two tours in Afghanistan.

In one section of the park is a new memorial bench, dedicated on Saturday.

It’s placed here, in honor of U.S. Army Specialist Eric Finniginam, who was killed in action on May 1, 2010.

Bakken says having the 26-year-old as a friend and comrade in arms “changed everything.” 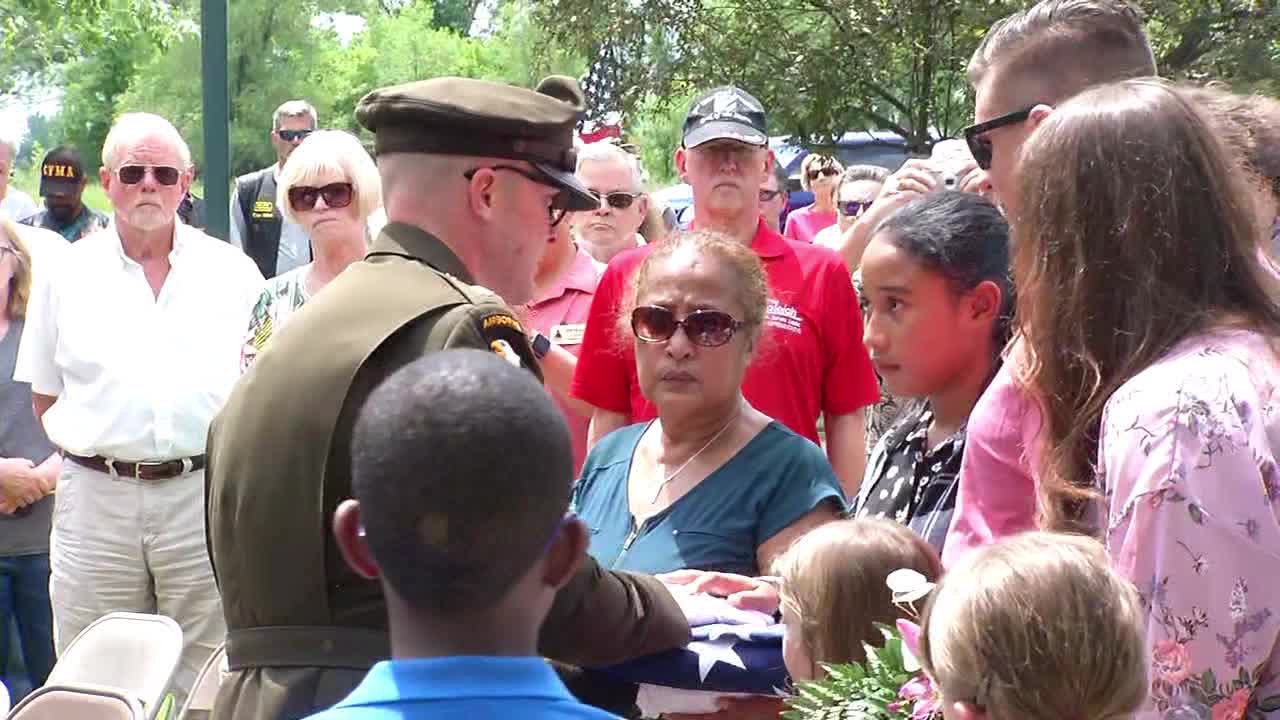 The family of a fallen U.S. veteran who died in Afghanistan receives his burial flag (KSTP).

He adds making sure the bench came to be was a mission of honor.

During a dedication ceremony, Bakken told Finniginam’s family — and dozens of assembled military veterans — about his friend’s death.

“I’ve never felt pain like that ever in my life,” he said. “One of the hardest things I’ve ever had to do in my whole life was to call my mother and tell her that Finn was killed.”

Bakken says Finniginam — or ‘Finn’ to soldiers in his unit — was born and raised in Micronesia, in the South Pacific, before he joined the army.

Amid the fighting, the two Erics — from opposite sides of the globe — became best friends.

“We stood side by side, in firefights, we knocked doors down. I went right, he went left,” Bakken recalls. “Firefights, big missions, it was super intense. And when you go through all that stuff with each other, one after another, that’s just where the real magic happens. That bond is just solidified for life.”

During leaves — he says he brought Finniginam back to the states.

Just weeks before his death, his friend became an American citizen.

Bakken says he was there when Finniginam was killed during a rocket propelled grenade attack.

“There’s lots of survivors guilt,” he explains. “There was a lot of pain. I still have a lot of pain, and I’ve said it before, I don’t exactly want it to go away because that’s how I remember him.”

More than a decade later, Bakken is honoring his friend.

Dozens of veterans surrounded Finniginam’s family, who were flown to Minnesota for the ceremony.

The gathering included a 21-gun salute, a playing of taps — and a folded American flag given to his mother.

“I can’t express enough how it means for my family and I to be here today,” Maria Finniginam told the group. “I am beyond blessed with the legacy my son has left behind.”

Bakken says he organized a crowd-funding effort to raise $30,000 for the memorial bench.

He says his mission is not over — that he wants to honor other members of his unit who made the ultimate sacrifice.

His idea is to surround the bench with bricks, etched with the names of the fallen — so they can be together again.

Finniginam is laid to rest in Micronesia, on the island of Yap, where he was born.

Bakken now has a legacy of his own — he’s named his 7-year-old daughter ‘Finley’ in honor of his friend.

Slowly, the weight of his loss is easing, Bakken says — especially with this remembrance.

“We gave something to his family and selfishly, I got something back, too,” he says. “Kind of like a restored faith in the people of Minnesota, and I get to give them and be a part of something so special. I’m probably going to get a little peace back that’s been taken from me a long time — and I’m really grateful to get that peace back.”