It’s a seemingly never-ending line, from one country to another.

Most are women and children fleeing Ukraine, trying to get into Poland.

“This is the border. This is where people are coming across,” says Mike Zuckerman, with Alight, a global humanitarian organization based in Minnesota. “From Ukraine, most of the Ukrainians.”

They come with their belongings packed in shopping carts or in a single suitcase.

This is Medyka, Poland, 200 yards from the Ukrainian border. A gateway to freedom for thousands of refugees. 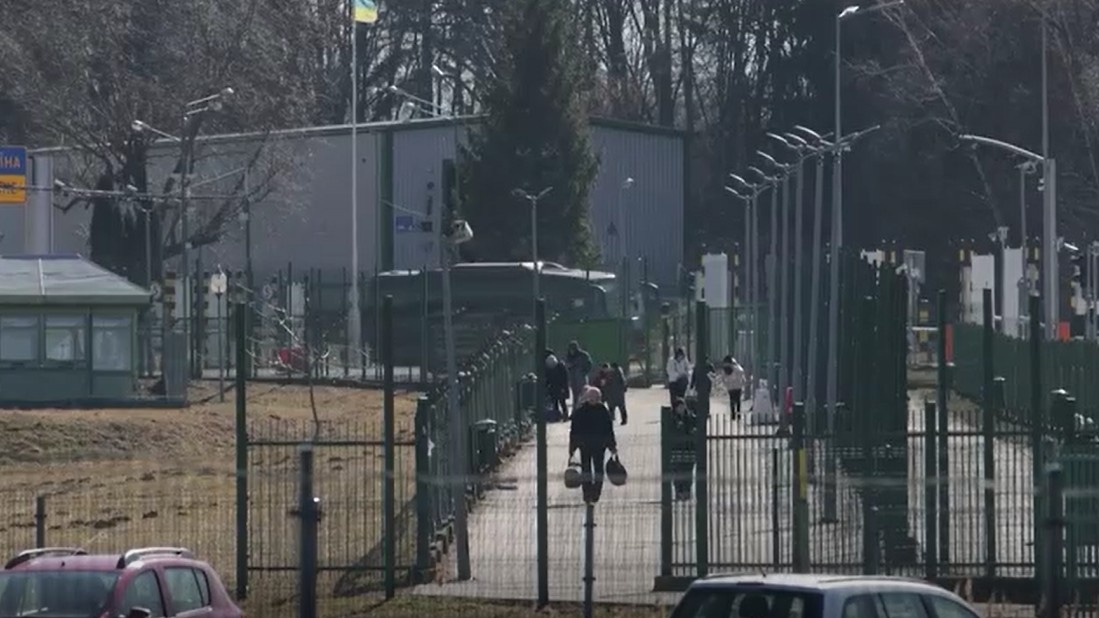 “The need is certainly more dire than maybe anyone in America could know,” declares Mark Lindquist, a U.S. Air Force veteran from Moorhead. “Having fled a war zone, traveled four days across the country. Scared, [they] don’t know where to go. Some don’t have a plan, [and] some don’t have any money. Some are carrying everything they own in plastic bags.”

Lindquist has been in Ukraine since April 1, trying to help in the humanitarian effort.

He spoke to 5 EYEWITNESS NEWS on a zoom call from Lviv.

The United Nations Refugee Agency (UNHCR) says about 4.7 million people have fled Ukraine since the Russian invasion on February 24.

More than half, some 2.6 million refugees, have evacuated to Poland, according to UNHCR.

The UN’s latest numbers show between 23,000 and 24,000 people crossing the Polish border every day.

“A week ago, it was slowing,” explains Chris Kindler, Alight’s communications director. “With some recent fighting and events in the last few days, we’ve seen it spike again.”

Alight says it’s had a team on the ground in Medyka since late February —about a dozen people.

Aid workers say the refugee center has grown from a few tents to seventy or eighty.

“Essentially, this place is a transit site to get people away from the border to additional facilities where they can be routed to homes, to other cities,” Zuckerman explains. “We’re really trying to establish communications from the other side of the border, the Ukraine side. Find out how long that queue is, when to anticipate people, making sure the buses are running.”

“People need to know that somebody heard them, that somebody recorded what they experienced,” said Sanja Djurica, an Alight Ukraine team member. “If nobody hears it, if nobody validates it, it seems like nothing happens.”

Meanwhile, Lindquist — who dropped out of a Minnesota congressional race to come to Ukraine — has started a humanitarian effort of his own, based in Lviv.

That decision came after changing his mind about enlisting as a military volunteer.

“If we could get food, which we’re loading up a van tomorrow to do that … if we could get food and calories to these people, that would do way more good than an air force guy could do with a weapon,” Lindquist says.

The 40-year-old air force veteran says he’s funding his visit with $5,000 of his own money.

He’s also raising funds to help buy supplies for refugees, not just for food but also for personal items like shoes, rubber gloves, soap, and even plastic cups trying to meet individual needs.

Back in Medyka, with the refugee crisis more than a month old, Alight has begun setting up short-term housing for refugees in Poland, about 200 people so far.

“The Airbnb’s where they’re staying, it’s a 30-day stay,” Kindler says. “They can’t sign a one-year lease, [and] they don’t have the funds, and they would like to return home sooner than that.”

The idea is to help refugees avoid feeling isolated in a strange country.

“Safe haven spaces or child-friendly spaces, in communities where Ukrainians are temporarily settling,” Kindler notes. “Places where they can go to connect with one another.”

Alight says it’s also shipped thirty tons of food and seven truckloads of medicine and medical supplies to hospitals and orphanages in Ukraine.

For his part, Lindquist estimates he’s donated about $30,000 worth of food, clothing, and personal items so far. Lindquist says items range from 1,200 blankets ordered online for refugees on the Ukrainian side of the border to arranging to get a specific type of medicine for a young girl who needs it.

He says he’s hoping to meet next week with a group of bus drivers to discuss plans to take Ukrainian refugees to Sweden.

Both Alight and Lindquist say their efforts are open-ended.

The aid group says it’s received $3 million in donations. It hopes people will keep giving as long as the refugee crisis continues.

“Donor fatigue is sometimes an issue,” Kindler says. “You know, if the need arises, it sort of bubbles up again, and things become more desperate, I think people will rise to the challenge or rise to that occasion.”

Lindquist says his group of volunteers includes eleven Americans, six military veterans among them, and people from the UK, Denmark, and Canada.

He adds there are also three Ukrainians on his team, and he’s coordinating with dozens more inside that country.

Lindquist says he hopes to stay as long as he can make a difference.

“Knowing what I see now and the need, I will stretch this trip as long as they will let me stay, six months, a year, whatever,” he declares. “I think we’re uniquely situated. This team of Americans partnered with Danes and, Ukrainians, British citizens. There’s just too much work to be done to leave.”