Farmington boy diagnosed with cancer for second time, hockey team sends him off with major support

The Farmington hockey community came together, throwing a sendoff fit for battle Sunday.

At just 7-years-old, Ben Dapper took his last skate for the season as he prepares to take on cancer.

“I just cried out and said, ‘God just send us some encouragement and some hope’,” Brigitte Dapper said with tears in her eyes.

The tiny hockey player stood by his mom and dad inside the Schmitz Maki arena in Farmington, where dozens, if not hundreds of fans and supporters came out to wish Ben the best while battling Acute Lymphocytic Leukemia (ALL). 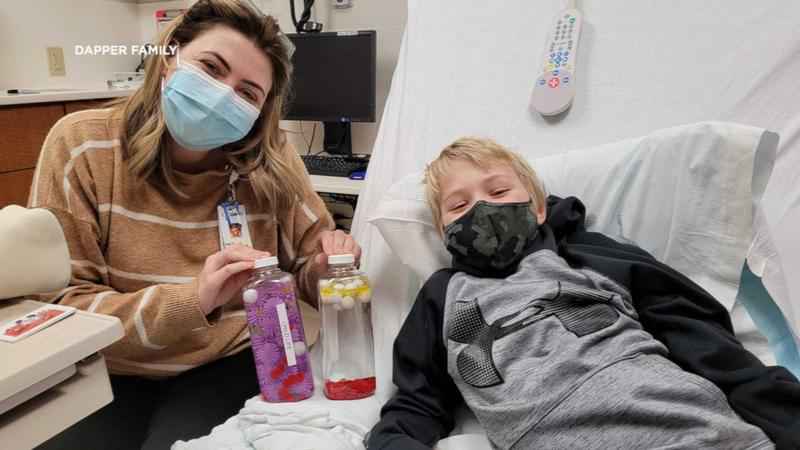 Leukemia is a type of blood cancer. And the word “acute” means leukemia can progress quickly and, if not treated, would likely be fatal in just a few months.

So, beginning this week, the Dapper family will head to Children’s Hospital in Minneapolis, where Ben’s team of doctors will start intensive treatment as soon as possible. It begins with surgery on Monday.

“We’re going to put my port back in,” Ben Dapper said.

Ben says “back in” because this is not his first time facing ALL.

And he got back to practice, wearing the same orange uniform.

But aches and pains led Ben and his family back to the doctors and more tests.

“It could have been just one cell hiding in my body,” Ben said. When we asked if he was nervous, he responded by saying “a little.”

Who wouldn’t be? But with his hockey family by his side, there’s no doubt a huge team is rallying behind Ben.

“We are so humbled and grateful,” his mom said. “All this support is going to give him so much hope,” she added, trying to speak up through the loud cheering and band playing in the background.

Ben’s mom says he’s the most positive kid she knows and that he’s looking forward to beating cancer again, getting back to playing hockey and with his friends.

“Looking forward to fighting this fight, and cancer being gone and hopefully never coming back,” Brigitte said.

Ben will once again start treatment this coming week, undergoing biopsies and chemo treatment for up to six weeks. The entire fight will last at least two years.