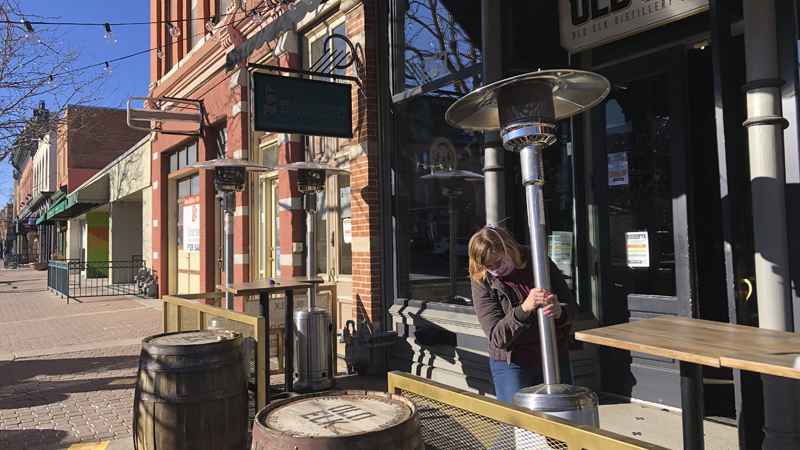 With coronavirus restrictions forcing bars and restaurants to seat customers outside in the dead of winter, many are scrambling to nab erratic supplies of propane that fuel space heaters they’re relying on more than ever to keep people comfortable in the cold.

It’s one of many new headaches — but a crucial one — that go with setting up tables and tents on sidewalks, streets and patios to comply with public health restrictions.

“You’re in the middle of service and having staff run up and say, ‘We’re out of propane!’" said Melinda Maddox, manager of a whiskey tasting room in Colorado.

Propane long has been a lifeline for people who live in places too remote to get natural gas piped to their homes for heat, hot water and cooking. This winter, 5-gallon propane tanks have proven a new necessity for urban businesses, too, especially in places like the Rocky Mountains, where the sun often takes the edge off the chill and people still enjoy gathering on patios when the heaters are roaring.

The standard-size tanks, which contain pressurized liquid propane that turns to gas as it’s released, are usually readily available from gas stations, grocery stores or home improvement stores. But that’s not always the case lately as high demand leads to sometimes erratic supplies.

“I spent one day driving an hour around town. Literally went north, south, east, west — just did a loop around Fort Collins because every gas station I went to was out. That was frustrating,” said Maddox, who manages the Reserve By Old Elk Distillery tasting room in downtown Fort Collins, about 65 miles north of Denver.

Nearly all states allow at least some indoor dining, but the rules nationwide are a hodgepodge of local regulations. In Fort Collins, indoor seating at bars and restaurants is limited to 25% of normal capacity, so there’s a strong incentive to seat customers outside despite the complication and expense.

Restaurants get creative with outdoor dining during pandemic, but how safe are they?

But Clark says the supply is there, it just may mean searching a bit more than normal. If there are 10 suppliers in a neighborhood, “maybe 1 out of 10 may be out of inventory. Certainly, you can find propane exchange tanks if you look around,” Clark said.

So far, the surge in demand for small-tank propane hasn’t affected overall U.S. propane supply, demand and prices, which are running similar to recent winters, according to the U.S. Energy Information Administration.

But trying to find a steady supply of propane can cost already-stressed businesses time and money they lack in the pandemic.

Gas stations are better than home improvement stores for propane tank runs because you can park closer, said Maddox, but shops that refill tanks are best because it’s cheaper and not as complicated as trying to run every tank dry.

“The issue there is it takes longer,” Maddox said. “You just have to build that into your day and say OK, it’s going to take 40 minutes instead of 25 minutes.”

Across the street, Pour Brothers Community Tavern owners Kristy and Dave Wygmans have been refilling tanks for their 18 or so heaters and fire bowls at a supplier at the edge of town after a nearby shop stopped offering refill service.

They discovered that propane tanks carry a date-of-manufacture stamp. Propane shops won’t refill tanks older than 12 years unless they have been re-certified in five-year increments.

They also have gained insight into the market for space heaters, which more than doubled in price last fall due to surging demand, and outdoor furniture for their street-parking-turned-outdoor-patio area that can seat up to 44 people, Kristy Wygmans said.

Their employees also had to quickly learn to hook up propane tanks and light heaters, needed in a place where temperatures can plunge well below zero in winter.

"It’s almost like another service that we’re providing is outside heat,” Wygmans said.